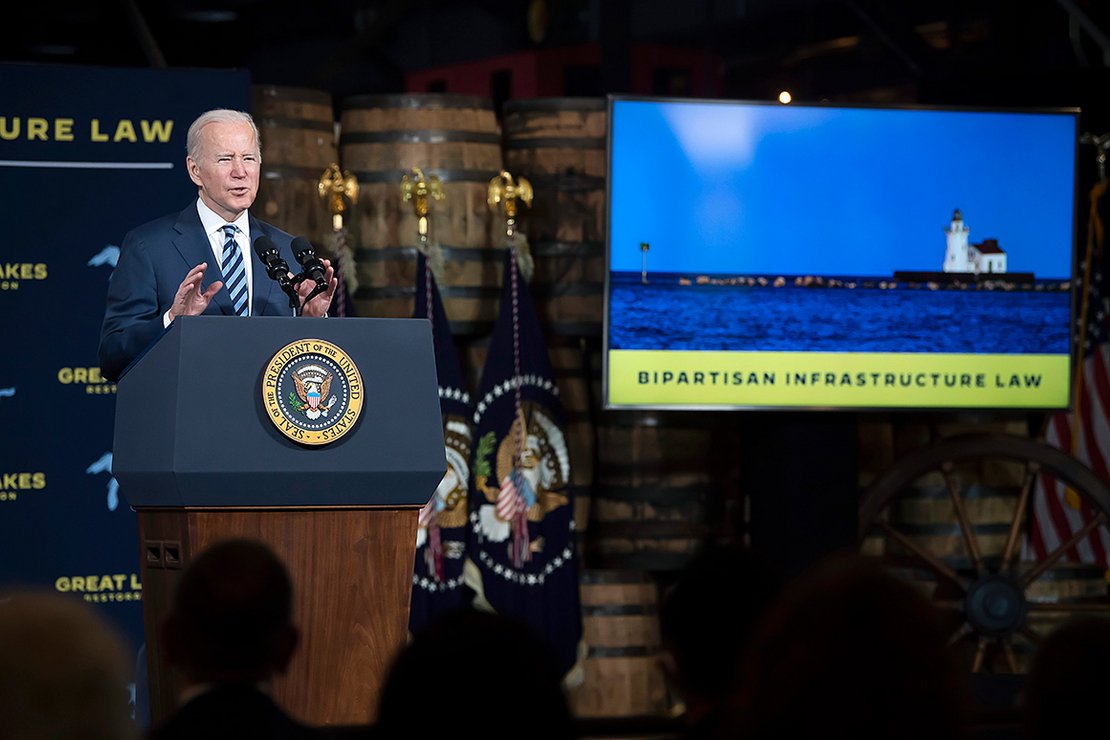 President Biden recalled yesterday that Ohio Democratic Rep. Marcy Kaptur handed him a note just after his first joint address to Congress last year, touting the virtues of the Great Lakes that are an economic driver in her district.

“The Great Lakes undergird life, work and recreation for millions of people, and we need to invest in them if we want a bright and more prosperous future for the region,” the note read.

Biden, appearing with Kaptur in her northeast Ohio district yesterday, sought to make good on that request. He announced that the $1.2 trillion infrastructure bill Congress approved last November would provide $1 billion for Great Lakes cleanup — the largest investment ever in the Earth’s largest source of fresh drinking water.

“These announcements are … showing that growing the economy and creating jobs can go hand in hand with protecting the environment, not decimating it, [and] meeting the moment on climate change,” Biden said.

Biden’s appearance with Kaptur is one of more than 1,200 events Democrats have held since the bipartisan infrastructure bill was passed to tout the law’s impacts for their districts, according to Rep. Debbie Dingell (D-Mich.).

The events range from praising traditional infrastructure projects, such as building roads, bridges and highways, to highlighting more environmentally minded efforts — including cleaning up pollution in dozens of sites on Lake Erie in Kaptur’s district.

As Democrats’ prospects for keeping the House next year have dimmed amid inflation woes and the pandemic, Biden and his party are betting infrastructure projects popular with both parties can win them votes and minimize their losses.

The bill was a win for a president who promised bipartisanship after four years of tension and former President Trump’s attempts to overturn the election results. Nineteen Republicans voted for it in the upper chamber, though just 13 GOP lawmakers signed off in the House.

Moreover, with the president’s “Build Back Better” climate and social spending package stalled, the new law offers the best chance for Democrats to appeal to many in their party eager for climate action.

“At the heart of this law is an understanding that protecting the environment and the economy are not mutually exclusive, they actually go hand in hand,” said EPA Administrator Michael Regan, who also appeared at the Ohio event and estimated the infrastructure bill would create 3,700 jobs in Ohio this year alone.

“We really want people to know how this bill is gonna make a difference in their lives in so many ways,” said Dingell, one of the co-chairs of the DPSC. Dingell said members exceeded their goal by holding 1,270 town halls, online talks, question-and-answer sessions and other meetings by the end of January.

Democrats made a contest not just of topping 1,000 events but of seeing which members would hold the most. Rep. Rick Larsen (D-Wash.), a senior Transportation and Infrastructure Committee member, won by hosting more than 80. Dingell held 59 herself.

The events were varied. Rep. Cheri Bustos (D-Ill.) gutted a fish to tout the law’s impact on improving waterways. Rep. Troy Carter (D-La.) held a “Building a Better Louisiana” infrastructure tour in his district to show how crumbling bridges would be repaired and replaced under the law. Rep. Judy Chu (D-Calif.) highlighted its impact on clean water by touring the first PFAS cleanup facility in her district.

Dingell said she spent two hours outside on a runway in subzero temperatures last month to promote infrastructure improvement grants for a local airport.

Lawmakers facing competitive reelections have been among the most active.

Rep. Sean Patrick Maloney (D-N.Y.), the head of the Democratic Congressional Campaign Committee, advised each of the party’s 221 members to try to hold at least five events.

Rep. Mike Levin (D-Calif.), who faces his most competitive race since winning his Orange County seat in 2018, and who has held more than 50 events, said his primary goal is letting local leaders and agencies know about money that they can now tap into for community projects. He said if getting those projects helps win him votes, it’s “all the better.”

“We want to give our district the best chance of getting as many of the funds as we can,” said Levin, who said he was “thrilled” there was more than $250 million in the bill for saltwater desalination efforts he has pushed for in recent years. His district is home to the nation’s largest desalination plant.

In some cases, the environmental cleanup provisions of the law are particularly important to Democrats because they fit into their broader rhetoric about a just transition for communities formerly reliant on fossil fuels.

Funding to clean up abandoned mines, for instance, could have a major impact in Pennsylvania, which has the most abandoned coal mine problems. The Interior Department announced a $11.3 billion allocation earlier this month.

Much of the damage is concentrated in northeastern Pennsylvania, formerly a huge coal-producing region where Democratic Rep. Matt Cartwright has held the third most infrastructure events of any Democrat.

“This funding brings us one step closer to cleaning up those [abandoned mine land] sites and paving the way for economic development in our region,” Cartwright said during a White House call this month announcing the funding.

The White House also announced $4.7 billion to address orphaned oil and gas wells, stemming from the infrastructure law. Abandoned wells are also a major problem in the Keystone State.

Kaptur said explaining the funding in the bill matters because infrastructure is an area where voters from both parties “expect us to deliver.” In fact, she noted, many House Republicans, who in a partisan move opposed the final passage of the bill, have since held their own events to tout funding in it for local projects.

While the maneuver shows the enduring popularity of infrastructure, Kaptur said, it still can be frustrating politically.

“Don’t say you were for it when you are against,” added Kaptur, who herself could face a tough path to reelection this fall depending on how redistricting plays out in Ohio.

In many ways, touting the visible benefits of an infrastructure bill is an obvious move that stretches back through generations of American politicians.

When the Clean Water Act passed, for example, lawmakers frequently claimed credit for wastewater projects and showed up to ribbon cuttings, said Barry Rabe, an environmental policy professor at the University of Michigan.

“It’s almost a political no-brainer to show what you’ve been able to do, whether that’s a wastewater treatment plant, an [electric vehicle] charging station, a bridge, you name it,” Rabe said.

“If anything, Democrats may have been a little slow to move into that claim-credit mode for this,” Rabe added.

Democrats can nonetheless bring it into the midterms as a way to show they are effective, in contrast to the GOP control of government under the Trump administration, said Paul Bledsoe, a former Democratic staffer and White House aide who is now a strategic adviser for the Progressive Policy Institute.

“This one should be easy,” Bledsoe said. “They don’t have to overthink it.”

But the law presents Democrats some political challenges.

Environmental groups still expect Democrats to pass some form of the $1.7 trillion “Build Back Better Act” to be able to claim victory on climate change and environmental justice.

There are plenty of pro-environmental provisions in the infrastructure law, including EV charging and lead pipe replacement, said Pete Maysmith, senior vice president for campaigns at the League of Conservation Voters.

“It’s not sufficient on its own to address the climate crisis,” Maysmith added. “That is undoubtedly true, indisputably true.”

Democrats also run the risk of disappointing key midterm voters whom they need to turn out if they do not pass “Build Back Better” after months of sweeping rhetoric and blown legislative deadlines.

Compared with the bold declarations surrounding the policies in “Build Back Better,” Rabe said the infrastructure bill “looks like fairly small potatoes given what’s been promised.”