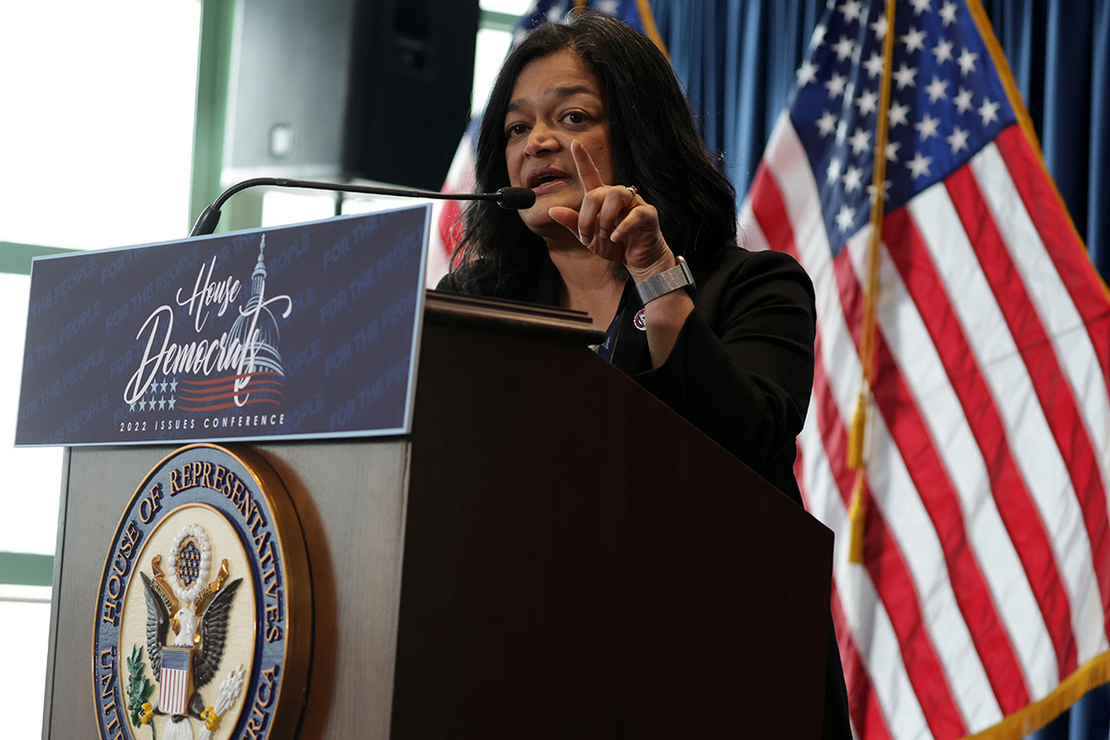 PHILADELPHIA — At their annual policy retreat that kicked off here yesterday, House Democrats tried to project a sense of unity ahead of the elections. They also played down concerns that soaring gas prices or a lack of progress on climate and social legislation would hurt them politically.

Democrats began huddling here after arriving in the wee hours yesterday morning hoping to unite around common messaging and legislative goals ahead of the November midterms. President Biden, whose polling numbers have sagged in recent months, will address the caucus today.

Rep. Sean Maloney (D-N.Y.), the head of the Democratic Congressional Campaign Committee, said he did not believe the $1.7 trillion climate and social spending bill, known as the “Build Back Better Act,” must pass for Democrats to keep their House majority. He also suggested Democrats might wind up breaking the package into pieces.

“I want to take every win we can get for the American people,” Maloney told reporters. “I’ll do them one at a time; I’ll do them all together… but there is the reality of the reconciliation process.”

Indeed, congressional Democrats had hoped to move the bill through the Senate in a single package under budget reconciliation rules that would allow it to pass along party lines with a simple majority.

But Senate Energy and Natural Resources Chair Joe Manchin (D-W.Va.) pulled his support for the bill in December, citing its price tag amid inflation concerns. No new talks on the bill have happened since then.

Rep. Pramila Jayapal (D-Wash.), the chair of the Congressional Progressive Caucus, joked that “Build Back Better” has become like the villain Voldemort in the “Harry Potter” books — a character whose name is never uttered. “We just don’t say those words, but we continue to work on pieces of legislation,” she said.

That appears to be the consensus among Democrats on both sides of Capitol Hill, particularly after Biden did not say the bill’s name during his State of the Union address this month.

“I don’t think it’s going to be called ‘Build Back Better’ ever again,” Senate Environment and Public Works Chair Tom Carper (D-Del.) said in an interview on Capitol Hill yesterday.

Jayapal said she continues to talk with senators about options but conceded that she has not recently spoken with Manchin. She added that the Congressional Progressive Caucus will outline executive actions it has long pushed, including on climate and energy, that Biden can take with “Build Back Better” stalled.

Jayapal said proposing executive action is not meant to replace the bill, but rather to complement it. “Let’s try to do as much as we can [with legislation] and also be ready with executive orders,” she said.

Maloney, who briefed members here on House Democrats’ strategy for the midterms, told them that polling shows the party’s agenda, which includes hundreds of billions in climate investments, is “extremely popular” with voters. He said polling also shows Democrats must avoid “preaching” to voters about those ideas and be “more empathetic” as they talk about the real-world impacts of their policies.

Rep. Paul Tonko (D-N.Y.), chair of the Energy and Commerce Subcommittee on Environment and Climate Change, said calls for climate action have come up repeatedly in various policy and political presentations at the retreat. A big backer of “Build Back Better,” Tonko said he, too, would be open to breaking the package into pieces if it could get major elements passed.

He said not only does the issue appeal to voters, but the Russian invasion of Ukraine makes it easier for Democrats to argue about lessening the nation’s dependence on fossil fuels.

“The whole issue of warring countries and dictators trying to take over countries is really driven by oil. I think it tells us that the legitimacy of getting off fossil fuel and going with renewables is going to solve a lot of problems, including world peace,” he said.

Despite 31 retirements thus far and traditional headwinds facing almost every president in a first midterm election, Maloney tried to offer an upbeat assessment of his party’s chances for keeping the House, a prognosis at odds with most independent analysts, who see the GOP taking over after November.

Maloney said he believes Democrats came out better than expected in redistricting and added that the GOP would “pay a price” at the polls for attempts to gerrymander some districts.

“We have a better map than the one we started with,” he added.

Maloney stressed that Democratic incumbents viewed as the most vulnerable have outraised their GOP challengers by a 2-to-1 margin.

Democrats also tried to tamp down concerns that soaring gas prices would, at least for now, not hurt them with voters.

“I am asking people in the United States to make that sacrifice because in the long democracy is at stake,” said Foreign Affairs Chair Greg Meeks (D-N.Y.). He pointed to reports that Russian military equipment had become stuck in mud in Ukraine amid a mild winter as evidence that climate change might be having an impact on the invasion (Climatewire, March 4).

Congressional Black Caucus Chair Joyce Beatty (D-Ohio) conceded that the rising gas prices would be “painful” and said she did not yet know if they would affect the elections.

Democrats were eager to move beyond divisions on display earlier this week that forced them to pull $15 billion in coronavirus pandemic aid from the omnibus and temporarily delayed their trip to Philadelphia (E&E News PM, March 9). They insisted that voters are less likely to remember the floor fight and are more likely to welcome the bill, which includes billions in politically popular earmarks.

Jayapal, who was among the lawmakers opposed the plan to use previous Covid-19 aid to states as offsets to pay for the latest spending package, criticized party leaders for not explaining their plan until the legislation was released.

Said Jayapal: “The opportunity for us to know what is in a bill and prepare for things we either want to push back on or defend is the best way to do things.”

‘Dead as a stone’

The Senate, as ever, is the more difficult immediate political challenge for Democrats, with Manchin’s objections standing in the way of any kind of massive spending bill.

Senate Democrats held their own one-day retreat at Howard University in Washington, D.C., on Wednesday. Biden spoke to the Senate caucus about the ideas behind “Build Back Better” in remarks Wednesday evening, Sen. Sheldon Whitehouse (D-R.I.) said in an interview on Capitol Hill yesterday.

“If you call it ‘Build Back Better’ — dead as a stone,” Whitehouse said. “If we can’t find a meaningful use for reconciliation measure that we stayed up all night to pass and that allows us to do something meaningful with 50 votes, it is political malpractice.”

Still, high energy prices exacerbated by the war in Ukraine have only elevated Manchin’s concerns about inflation, and he has in recent days stressed the need for an “all of the above” approach to energy — including fossil fuels.

Manchin, who chairs the Energy and Natural Resources Committee, was initially not seen as a major obstacle to the $550 billion in clean energy and electric vehicle tax credits that made up the bulk of the climate spending in “Build Back Better.”

But he also held an ENR hearing yesterday on energy security in which he called for the nation to “increase our domestic oil and gas production on both federal and non-federal lands.”