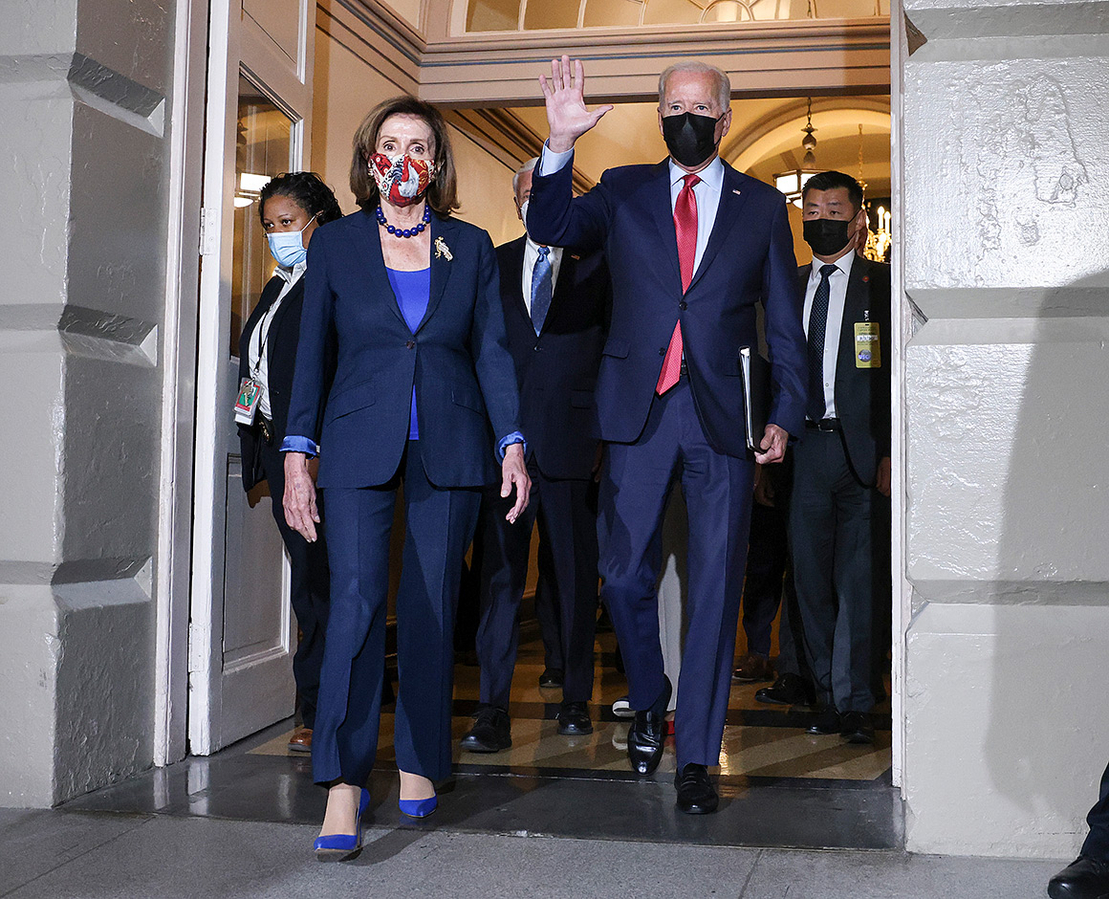 Progressive Democrats are resisting attempts to dramatically cut the $3.5 trillion reconciliation package, while conceding that some reductions to the proposal will likely be needed as President Biden looks to bring moderates on board.

Biden’s sweeping "Build Back Better" agenda now hangs in the balance. After a week in which members of the party traded barbs and postponed a vote on a more modest infrastructure package, supporters of the separate reconciliation measure, a social policy and climate bill, charged that moderates like Senate Energy and Natural Resources Chair Joe Manchin (D-W.Va.) and Rep. Josh Gottheimer (D-N.J.) were focusing too much on the total cost instead of the individual programs.

Asked yesterday on CNN’s “State of the Union” about Manchin’s recent offer of a $1.5 trillion limit on the legislation, Rep. Pramila Jayapal (D-Wash.), chair of the Congressional Progressive Caucus, declared, “Well, that’s not going to happen.”

“That’s too small to get our priorities in,” she told host Dana Bash. “So, it’s going to be somewhere between $1.5 and $3.5. And I think the White House is working on that right now, because, remember, what we want to deliver is child care, paid leave, climate change, housing.”

Senate Budget Committee Chair Bernie Sanders (I-Vt.) held fast to his position that $3.5 trillion should be the minimum, though he recognized it might end up being less than that.

“When we especially talk about the crisis of climate change, and the need to transform our energy system away from fossil fuel, the $6 trillion that I had originally proposed was probably too little; $3.5 trillion should be a minimum. But I accept there’s going to have to be give and take,” he told ABC’s “This Week.”

Asked about a $2 trillion bill, Sanders said, “That’s not enough.”

Rep. Alexandria Ocasio-Cortez (D-N.Y.) argued that the discussion about numbers is masking a real debate over which programs in the bill — such as those related to drug pricing, child care and community college — “are willing to be excluded.”

Climate-related provisions, Ocasio-Cortez said, are among those that cannot be dropped. “We cannot afford to increase carbon or … fossil fuel emissions at this time. That is simply the science,” she told CBS’s “Face the Nation.” “That is not something we can kick down the line.”

‘He expects to get both bills’

Biden adviser Cedric Richmond stood firm that the president is committed both to the $3.5 trillion bill and $1 trillion bipartisan infrastructure bill that progressives are holding up in a bid to make sure the reconciliation bill can pass.

“The president wants both bills, and he expects to get both bills,” he said, resisting host Chris Wallace’s attempts to get him to name a specific top-line number.

The prior day, Biden acknowledged the difficulties in trying to bring the entire party together on both bills.

“Everybody’s frustrated,” he told reporters at the White House as he left for his Wilmington, Del., home for the weekend. “It’s part of being in government, being frustrated.”

He said he would “work like hell” to get both bills passed, but didn’t put a deadline on the efforts. 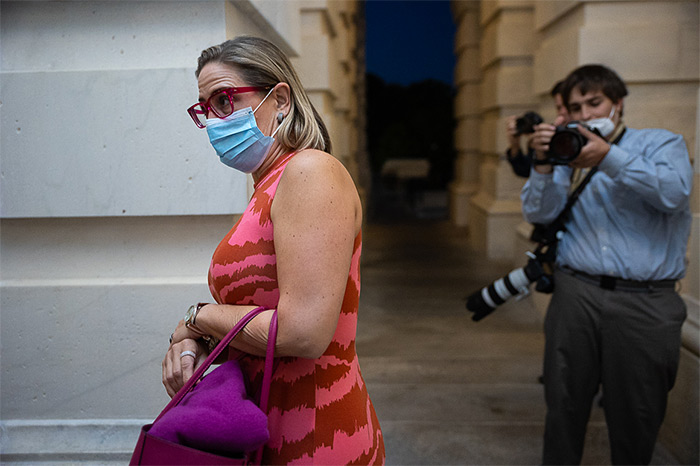 Lawmakers confirmed after a Friday meeting with the president that Biden had urged Democrats to compromise and move the two bills together.

His message to moderates was that they would not get their infrastructure bill without first working out a reconciliation deal. Progressives, meanwhile, were told they should set priorities and expect a lower price tag for their current, $3.5 trillion reconciliation package.

Members emerged from the meeting, however, with no sense of how long it would take to reach an agreement on reconciliation, deeply frustrating moderates who said they had a deal with Pelosi to vote on the bipartisan bill by the end of last week.

“There’s not a road map on how we proceed at this point,” said moderate Rep. Jim Costa (D-Calif.), adding that he was unhappy with his party leadership’s decision to delay a vote on the Senate-passed bill after Pelosi had promised, up until the meeting with Biden, that the House would act imminently.

“I’m very disappointed,” Costa said. “There were commitments made that we were gonna vote" on the bipartisan bill.

In a “Dear Colleague” letter to House Democrats over the weekend, Pelosi seemed to be setting an Oct. 31 deadline for passing the bipartisan measure, which would fund surface transformation programs for the next five years.

“We must pass BIF well before then — the sooner the better, to get the jobs out there,” said Pelosi, referring to the bipartisan infrastructure package.

Biden signed the 30-day extension into law on Saturday.

Pelosi also defended her decision to delay the bipartisan bill vote as one of necessity, blaming disagreement about the topline number for reconciliation as an unforeseen roadblock to reaching a deal by the end of September that would pave the way for passing both measures on the “dual track” strategy she had promised to facilitate.

But Rep. Stephanie Murphy (D-Fla.), who leads the centrist Blue Dog Coalition, had harsh words for progressives after the meeting, saying the delayed vote would “harm future negotiations and further complicate enactment of President Biden’s agenda.”

“It’s a sad day for our nation when a few Members of Congress block much-needed results for the American people, not because they oppose the bill before them, but because they don’t trust members of their own party,” Murphy said in a statement.

The delay in the House could also alienate Manchin and Arizona Sen. Kyrsten Sinema (D), whose buy-in will be critical for advancing any reconciliation legislation.

Sinema released a scathing statement Saturday of the developments across the Capitol, where she served before being elected to the Senate.

“Good-faith negotiations … require trust,” she said. “Over the course of this year, Democratic leaders have made conflicting promises that could not all be kept — and have, at times, pretended that differences of opinion within our own party did not exist, even when those disagreements were repeatedly made clear directly and publicly.

‘It’s going to be tough’ 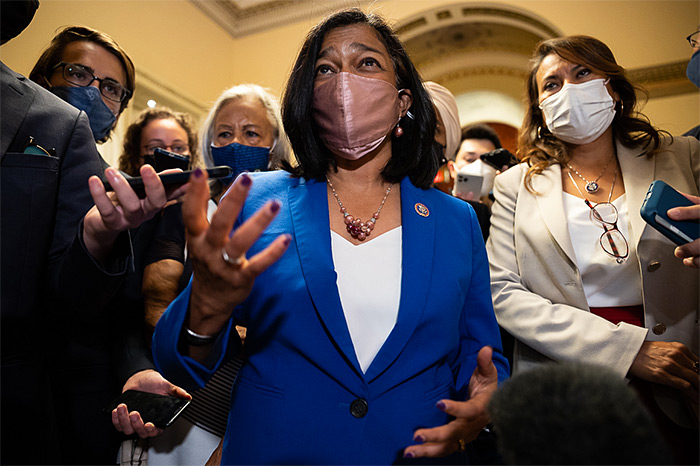 Rep. Emanuel Cleaver (D-Mo.) left the Friday meeting with Biden deeply worried about what would happen next, calling the possibility of failing to deliver on both pieces of legislation an “existential” threat to the Democratic Party’s ability to keep its fragile majorities in the House and Senate in 2022.

“People don’t understand the gravity, allowing this to all go down in smoke,” he said.

House progressives enjoyed a major victory on Friday by blocking passage of the bipartisan infrastructure bill as leverage for reconciliation talks, and said they felt validated by Biden’s agreement that both bills should be linked and travel together through the legislative process. But they onceded that preserving the current, $3.5 trillion top-line number is an area where they lost.

Rep. Henry Cuellar (D-Texas) said Biden acknowledged in the closed-door meeting that reconciliation’s price tag would ultimately be closer to $2 trillion — maybe less. The task now for committees and negotiators in leadership is figuring out how to trim it down, and whether that means cuts to spending across the board or leaving out specific programs.

The House reconciliation bill, drafted by several committees of jurisdiction last month, contains hundreds of billions of dollars for clean energy and energy efficiency initiatives, as well as $30 billion for lead pipe removal — an area potentially ripe for cuts, given that the bipartisan bill also contains money for lead.

The White House and top Democrats agreed in recent days to a big boost to carbon capture tax credits as part of the budget deal, Reuters reported. E&E News was unable to confirm the report.

Manchin has also expressed specific concerns about the $150 billion Clean Electricity Performance Program, the centerpiece of the bill’s climate programs, and is pushing for the inclusion of carbon capture and storage in the clean energy tax provisions.

Rep. Paul Tonko (D-N.Y.), a senior Energy and Commerce Committee member, said Biden in the meeting mentioned that climate action is an overarching goal of the combined package. Tonko said he expects it will get "high prioritization" in the ongoing negotiations.

Biden is "encouraging us that there is a path forward, and we should look at what’s most meaningful,” Tonko said. “If we can’t get it all, then let’s have the prioritization of what we can get done; let’s do that.”

Rep. Marcy Kaptur (D-Ohio), the House’s top energy and water appropriator, who has championed a $30 billion investment in the reconciliation package to fund the creation of a Civilian Climate Corps, explained that Biden asked members to suggest their priorities for the package, understanding that there will have to be some sacrifices made.

"Climate is already in the measure — it’s just a matter of how much," she said.

Rep. Sean Casten (D-Ill.) said following the meeting that the "point [Biden] made that I thought was the most articulate and the strongest was, he said, ‘People just need to stand up and say what they’re for.’"

“It you think climate doesn’t matter,” Casten added, “say it.”