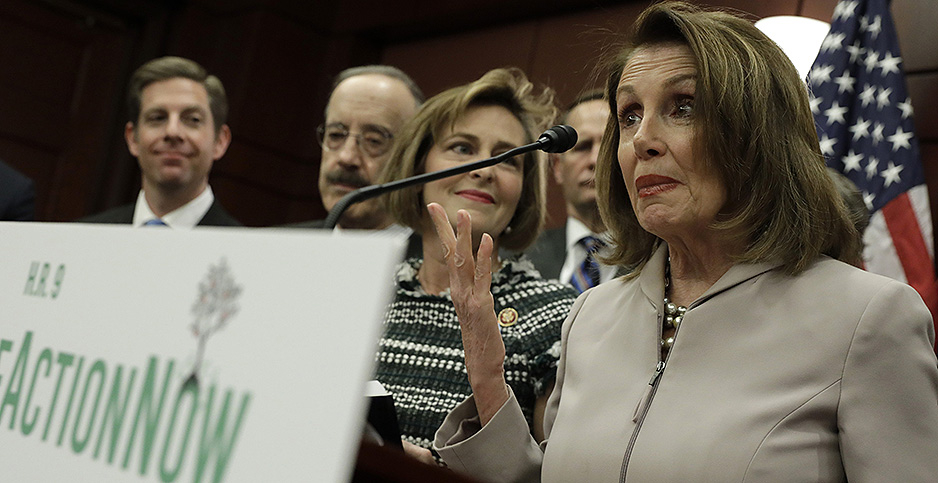 In early March, the House Oversight Subcommittee on Environment was set to hold an additional climate change hearing, part of a series that had drawn several high-profile witnesses, including former Secretary of State John Kerry.

The meeting was postponed due to the COVID-19 pandemic and still sits as the most recent item on the hearing page of the committee’s website. It has not been rescheduled.

It’s a symbol of what House Democrats face after they spent more than a year laying messaging groundwork and building support for climate policy on Capitol Hill. Any long-term plans they had for climate, and most other issues, have been put on the back burner.

The hope in most corners of the party was that it could build enough support and have policies in hand to pass a serious climate bill at the beginning of 2021 if Democrats win the Senate and the White House.

Now, the work of the House Select Committee on the Climate Crisis has been delayed indefinitely, and the near-monthly announcements of climate-related hearings in the Energy and Commerce Committee have ground to a halt.

That’s on top of a refreshed barrage of opposing messaging, as Republicans attempt to frame virtually any climate policy during the pandemic recovery process as a socialist fantasy that could wreck an already damaged economy.

It’s also more likely that the next Congress will face a continuing economic downturn at the beginning of next year that turns its focus to recovery, rather than the kind of discrete policy areas lawmakers tend to focus on in a thriving economy.

It leaves climate politics on Capitol Hill in doubt and offers more questions than answers as Democrats game out the next year.

"Our hearing schedule has been upended, obviously, and there’s uncertainty for the legislative calendar this year," said E&C Subcommittee on Environment and Climate Change Chairman Paul Tonko (D-N.Y.).

Tonko’s subcommittee alone has held roughly a dozen climate-related hearings since the beginning of the 116th Congress, but his panel hasn’t met publicly in any capacity since early March.

"But we’ve continued to meet with stakeholders and think about the future of federal climate legislation," Tonko said.

Adding to the uncertainty is the resistance, particularly among the GOP, to having committees meet remotely, even if Democratic leadership is pushing for them to get back to work.

In the meantime, Democrats are doing all they can to do their climate work virtually, but much of it is tied up in the pandemic.

One of the few things the select committee did in recent weeks, for instance, was hold a members-only briefing on a Harvard University study that tied air pollution to higher mortality rates from COVID-19.

"We look forward to releasing our congressional climate action plan later this year, and we will continue to work on helping the millions of families and workers who have been greatly affected by the coronavirus," Chairwoman Kathy Castor (D-Fla.) said in a statement.

It ultimately means less exposure for climate as a messaging issue and fewer opportunities for advocates to draw press coverage. To that end, Rep. Jared Huffman (D-Calif.) blamed Republicans for delaying the House’s work for political gain in the name of the pandemic.

"There’s no way around it: We have to change the rules of the House to make any of this work," said Huffman, a member of the select committee. "And there’s just been a great reluctance to do that among some members, and I think a fairly sinister obstructionism by the Republicans, using this as an opportunity to grind our work to a halt."

‘When the time is right’

But the pandemic also offers something of a double-edged political sword for Democrats.

Democrats rolled out the bill in January, and even Chairman Frank Pallone (D-N.J.) acknowledged that it had very little chance of passing into law this year (E&E Daily, Jan. 29).

It has largely fallen into obscurity amid the pandemic, and Tonko hedged when asked whether he expects his committee to hold a markup.

At the same time, Tonko said he sees the bill as a menu of policy items to plop into stimulus packages down the road.

On top of a plethora of new programs, such as a proposed National Climate Bank, the legislation includes big long-term reauthorizations of various Department of Energy programs, such as the Low-Income Home Energy Assistance Program (E&E Daily, Feb. 26).

"When the time is right, I believe Congress should advance a long-term recovery package that gets Americans back to work, and guess what? We know that solar installer and wind technician have been two of the fastest-growing jobs in the country for several years prior to this pandemic," Tonko said.

It’s worrying for some clean energy industry advocates that those priorities keep getting pushed down the road (E&E Daily, May 14).

“The streets are still wet on sunny days in Miami.”

House Democrats did not include any targeted relief for clean energy in the $3 trillion COVID-19 aid proposal set for a floor vote today, even as a widely publicized analysis this week showed the sector has lost nearly 600,000 jobs in the downturn.

And while some Republicans have signaled an openness to some of the clean energy sector’s relief asks, many still oppose any broad extension of renewable tax credits or anything that could be construed as the Green New Deal.

"Obviously, my district is home to a lot of wind energy, and I know they’re on certain timelines to build out and all," E&C ranking member Greg Walden (R-Ore.) said in a recent interview.

"I think we have to be thoughtful about that — that a lot of projects that were on schedule, on budget, on plan suddenly went off in the ditch because you can’t work."

But the oil and gas sector, Walden noted, is also a major job creator. He predicted that Democrats, namely presidential candidate Joe Biden, would struggle to win states such as Pennsylvania — a swing state hub of hydraulic fracturing — if they push back too hard against the industry (E&E Daily, May 4).

Democrats, meanwhile, are hoping the pandemic doesn’t displace climate as an underlying political and electoral driver.

"The problem persists as a scientific truth, and I believe that many of my Republican colleagues have started to recognize that and that it’s important to their voters," said Rep. Scott Peters (D-Calif.), a member of E&C.

"The streets are still wet on sunny days in Miami."

Still, the prospects for a big climate bill, the holy grail that Tonko and his committee were trying to draft with the "CLEAN Future Act," have changed drastically.

It’s been more than a year since Democrats ceremoniously passed a climate bill — the "Climate Action Now Act," H.R. 9 — through the House for the first time in a decade.

It was little more than a messaging bill, something light on specifics that would simply require the Trump administration to rejoin the Paris Agreement.

She made little promise of future climate or environmental legislation but said that COVID-19 highlights the need "to tackle the issue of climate injustice and secure the long-term sustainability and well-being of all of our communities."

A few months ago, to climate advocates it looked as if 2021 might produce an opportunity for a big bill, like "CLEAN Future," dealing entirely with climate. Senate Minority Leader Chuck Schumer (D-N.Y.) even promised to pass such a bill first thing if he was to become majority leader.

Now, the hope come January is that Congress will be working on recovery legislation "that could have co-benefits for climate and clean energy," said Josh Freed, senior vice president for the climate and energy program at Third Way.

"Policymaking for all of us when we started this year was in the context of a good economy and a bitter election, where the election results on its own would spell out what could be done next year," Freed said.

Committees and advocates alike were operating under the assumption that a climate bill would pass because Congress wanted to address climate change.

"The COVID crisis and the depression have transformed that," Freed said.

And nearly every section of the advocacy world is trying to take advantage in anticipation of a process that could look much like the 2009 stimulus, often hailed as the biggest ever clean energy bill.

When Ceres, the nonprofit advocacy group, brought in more than 300 companies for a climate change lobby day earlier this week, their focus was on promoting sustainability in the congressional economic recovery (E&E Daily, May 13).

At a similar event last year, their push was centered almost entirely on carbon pricing. Advocacy and environmental groups are churning out policy recommendations.

The Progressive Policy Institute, for instance, floated ideas for a recovery focused on clean manufacturing in a report released yesterday.

It makes various recommendations for research and development for clean energy and clean infrastructure, and it argues that renewables are an even more appealing investment amid crashing oil prices.

If Republicans continue to waiver on further stimulus packages, Biden could make a strong argument on the campaign trail for a major infrastructure bill and clean energy as a job creator that has climate co-benefits, said Bledsoe, who authored the report.

Oil and gas, after all, aren’t the only parts of the energy sector with a foothold in swing states.

"If Republicans want to prevent investment in clean energy manufacturing, they’re going to lose on the issue this fall because this is a job creator in swing states, where manufacturing was cratering in 2019, long before the corona onset," Bledsoe said, citing states like Michigan and Ohio.

Plus, he added, "you can talk about this agenda without mentioning climate at all."