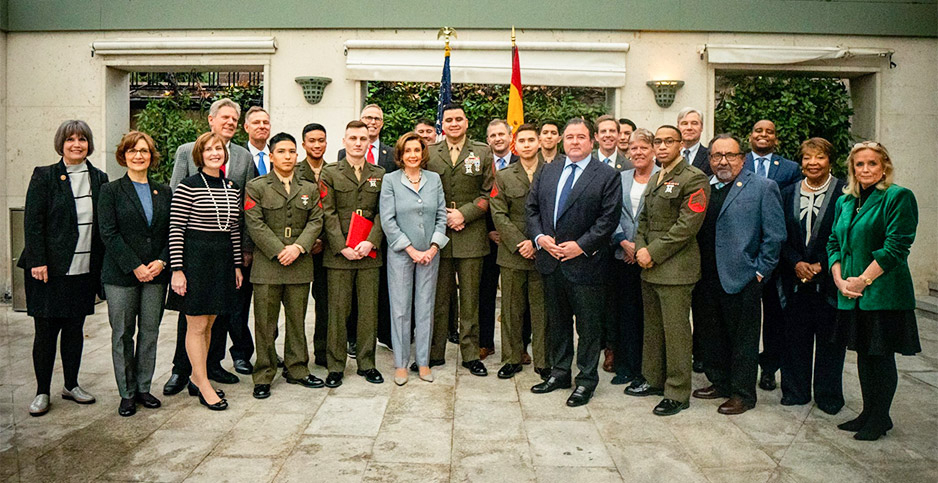 Service members and U.S. Ambassador to Spain Duke Buchan welcomed House Speaker Nancy Pelosi (D-Calif.) to Madrid this weekend along with other lawmakers attending the climate conference there. @SpeakerPelosi/Twitter

House Speaker Nancy Pelosi (D-Calif.) and other congressional Democrats are in Madrid for U.N. climate talks this week, lending a high-profile voice to U.S. supporters of the Paris climate agreement as the 2020 elections heat up.

Democrats said their presence would demonstrate continued commitment to tackling climate change in the U.S. government, even as President Trump pulls out of the Paris Agreement.

The administration formally began its withdrawal from the agreement last month, allowing the United States to leave in November of next year, but any of his Democratic challengers in 2020 would likely move to rejoin if elected.

"On behalf of the United States Congress, I extend my gratitude to the Spanish government for hosting this critical meeting, and for elevating the priority of the climate crisis to the forefront of the international conversation," Pelosi said in a statement.

The delegation marks a departure from last year’s talks in Poland, when a handful of Democratic lawmakers sent staff and pro-Paris forces from the U.S. kept a relatively low profile.

The Trump administration is also not planning to hold pro-fossil fuel side events at this year’s conference, known as COP 25, as it has in past years (Climatewire, Nov. 25).

Banks is now on the Republican staff for the House Select Committee on the Climate Crisis. Chairwoman Kathy Castor (D-Fla.) is at U.N. talks with Pelosi this year, and a spokesman for the GOP side of the panel said Pelosi invited ranking member Garret Graves to attend, but he was unable to attend due to a scheduling conflict.

The Louisiana Republican is hoping to get to Madrid during the second half of this week if time allows, the spokesman added.

One GOP aide said the Energy and Commerce Committee had been in talks about sending a bipartisan staff delegation to COP 25, but they fell apart after Pelosi announced the Democratic delegation.

The speaker and her Democratic allies could take on an even higher profile, given that they represent the views of Trump’s opposition in the coming election.

Virtually the entire Democratic primary field has pledged to return to the agreement if elected, and House Democrats passed a bill, H.R. 9, earlier this year that would force the administration to rejoin Paris.

Given that the Senate is likely to remain closely divided, making sweeping legislation a difficult proposition, a return to Paris could be one of the most consequential moves on climate if a Democrat takes the White House.

The Democratic delegation will hold a news conference this afternoon from Madrid, though they may not be there for long.

The House returns to action tomorrow and will continue negotiations on government spending, taxes, the annual defense authorization and a host of other issues (see related story).

The House Judiciary Committee will also hold the first public impeachment hearings this week, while Energy and Commerce Committee lawmakers will have to be back in town for a planned hearing Thursday on climate change (see related story)

COP 25 will focus particularly on the impact of climate change on the world’s oceans, an issue Pallone said he is eager to talk about.

"I look forward to discussing ways that we can collectively work together to address ocean issues that are seriously undermining entire marine ecosystems, fresh water, fisheries and coastal economies," Pallone said in a statement.