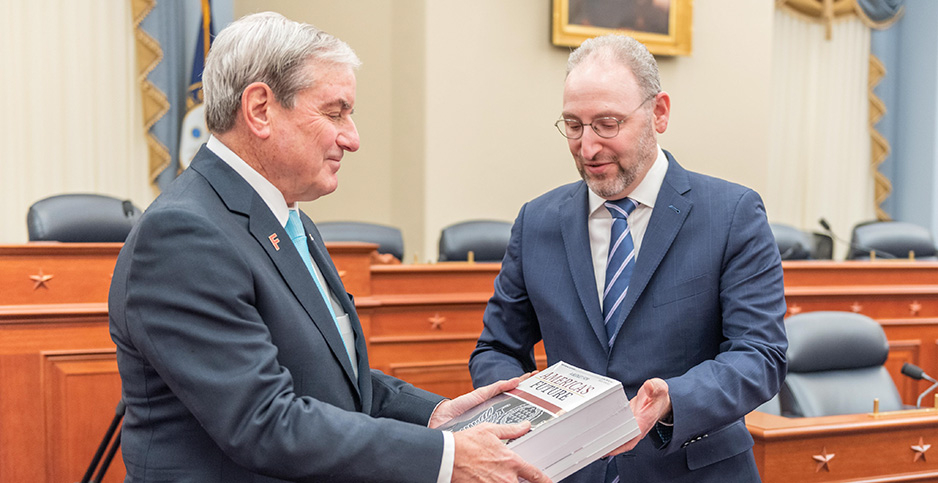 The White House budget proposal released yesterday set off the traditional war of words on Capitol Hill. Democrats are using it as a political weapon to frame President Trump as at odds with modern climate and environmental science. A key Republican said he doesn’t even want to talk about it.

Enzi said he doesn’t plan to hold a hearing on Trump’s proposal, lest it turn into "a diatribe against the president."

"Presidents’ budgets, regardless of what president, are a chance for members not in his party to beat up verbally on whoever is president," Enzi said.

Congress is indeed likely to ignore the budget request almost entirely, but Democrats seized the opportunity yesterday to bash Trump’s environmental record in an election year.

The document would slash the Department of Energy’s clean energy research programs and cut EPA by a whopping 27%. That’s all as lawmakers in recent years have come to bipartisan agreements to raise funding for many environmental programs, particularly DOE research that they see as key to combating climate change.

"There is one term that appears nowhere in the president’s budget: It’s called climate change," Senate Minority Leader Chuck Schumer (D-N.Y.) said on the floor yesterday.

"One of the greatest challenges of our time, the No. 1 threat facing our planet, climate change, is not mentioned once among the hundreds of pages of the president’s budget," he said.

The main budget document does not mention climate at all, though the White House is proposing to slash the EPA program that tracks greenhouse gas emissions as well as more than a dozen of the agency’s climate partnership programs (E&E News PM, Feb. 10).

New Mexico Sen. Tom Udall, the top Democrat on the Interior and Environment Appropriations Subcommittee, said the proposed cut to EPA shows "yet again that clean air and clean water are the lowest priority of this administration, especially when compared to polluter profits."

Udall also slammed the proposed 13% cut to Interior’s budget, which he said would harm Western states’ economies and natural resources by "effectively eliminating" the Land and Water Conservation Fund and "shortchanging" the payments in lieu of taxes program, which provides payments to rural counties with major federal landholdings.

"Instead of using the power of the White House to help Lordstown Motors get up and running, President Trump announced his intention on Monday to kill the very loan program that Lordstown Motors has said is critical to their business," Ryan said in a statement. "This isn’t a hand-out, this is a loan that will be repaid in-full with interest."

While most of those ideas are going nowhere in Congress, the budget proposal does line up the sides for another potential fight over clean energy tax issues.

The White House blueprint would take an ax to the electric vehicle tax incentive, the renewable investment tax credit, and various other breaks for renewables and energy efficiency.

Democrats, meanwhile, are attempting to put together a broad package of clean energy tax breaks after many of their priorities fell out of the year-end tax deal in December (E&E Daily, Jan. 31).

As it signaled in the budget proposal, the White House remains strongly opposed to the EV credit, leaving backers of the incentive grappling with how to work around Trump.

The credit allows buyers of EVs to receive up to $7,500 after filing their tax returns. But some large manufacturers have already hit the 200,000-vehicle cap on models sold, so they are no longer eligible to offer the tax break.

Sen. Ben Cardin (D-Md.), another Finance Committee member, said backers are "not giving up" on expanding the EV credit.

"If we can get an energy tax bill done, it’s going to include things that the president doesn’t like, so I would not rule this out," Cardin told reporters.

House Budget Chairman John Yarmuth (D-Ky.) announced yesterday the House would not be marking up a budget resolution, the nonbinding spending blueprint that guides the writing of spending bills.

Instead, he said, House Democrats would rely on last summer’s bipartisan budget deal that set spending caps for both fiscal 2020 and 2021.

Trump "decided he did not like the budget deal," said Yarmuth, who accused the White House of an "unreal breach of trust" by submitting a budget that ignores an agreement that took several months to hammer out.

"It is unfortunate that instead of using his budget to build on the historic investments in last year’s budget deal, the president doubled down on partisan talking points that have no chance of becoming law," Lowey said in a statement.

"Just as we did last year," she said, "House Democrats will write responsible appropriations bills that invest in American families and communities."

Senate Appropriations Chairman Richard Shelby (R-Ala.) did not rule out revisiting the budget caps deal, though he told reporters the budget proposal is "a starting point."