Democrats may succeed in greening Manchin 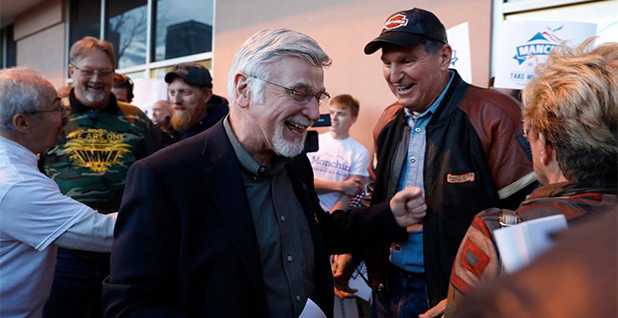 Senate Democrats are not publicly raising alarm over one of the chamber’s staunchest coal supporters taking over the ranking member spot on the Energy and Natural Resources Committee, and it may be in part because they think the power of the caucus is stronger than any one senator’s beliefs.

That may provide the needed cover for Sen. Joe Manchin (D-W.Va.) and his colleagues because, despite the protests of climate activists, it is looking increasingly likely he could rise to the ranking member spot on the ENR Committee should Sen. Maria Cantwell of Washington vacate her slot.

"If he does get that position … you know he could well have the potential to grow into the role," New Mexico Sen. Tom Udall, the top Democrat appropriator for Interior and EPA, told reporters last week.

"You know that you are a senator from a state who likes coal, and wants to push that, but that committee’s all energy," said Udall, "and all these regulatory agencies, so you have to have a broader view."

Cantwell is widely expected to take over the ranking member position on the Commerce, Science and Transportation Committee in order to pursue oversight of telecommunication and aviation industries important to her home state.

Democratic and independent senators in between Cantwell and Manchin on the panel seniority list — including Ron Wyden of Oregon, Bernie Sanders of Vermont and Debbie Stabenow of Michigan — have all said they would maintain their ranking member positions on other committees.

Environmentalists may be in panic mode, but the Democratic caucus generally believes Manchin can handle the key committee position.

And even if he offers a more muted approach to climate change, many lawmakers feel, the problems are so large and touch so many jurisdictions that others within the Democratic Party can offer alternative action areas in other committees.

"I think Joe understands that we need to move forward on a diverse set of energy needs, and so I will look forward to working with him in whatever capacity," Cantwell said.

Wyden said he will use his position atop the Senate Finance Committee to work on consolidating existing energy tax breaks into just a handful of incentives aimed at reducing carbon emissions, including for renewable energy, clean energy technologies, clean transportation fuels and energy efficiency, among others. The Oregon Democrat described the provisions as "more green for less green."

All the positive sentiments about the West Virginian doesn’t mean everyone is a 100 percent on board with Manchin — at least not yet.

Progressive and climate activist groups are particularly involved. Advocates from the Sunrise Movement gathered outside Senate Democratic Leader Chuck Schumer’s New York City office to protest the possibility of Manchin’s leadership. Those efforts have come alongside a petition effort from CREDO Action, a group of 5 million progressive activists.

Unlike presidential aspirants like Washington Gov. Jay Inslee (D) and billionaire environmentalist donor Tom Steyer, both of whom have active petitions to lobby Senate leaders to prevent Manchin’s ascension, Senate Democrats eyeing a run for the White House declined to criticize the possible Manchin leadership spot.

Sen. Jeff Merkley (D-Ore.), who has said he would use his campaign to warn about the impacts of climate change, would not directly address the ranking membership of Energy and Natural Resources but seemed to suggest Senate seniority would win out.

"We have a standard system, we’ll keep working on environmental issues, and we’ll figure it out," Merkley said.

For Manchin, the political coverage to move more left in his approach may be more readily apparent than his pro-coal history may suggest.

After winning re-election this year, Manchin won’t have another election until 2024. That freedom may open his perspective to more work on climate change policies.

Manchin already flipped his position compared to a committee vote on a controversial pick to join the Federal Energy Regulatory Commission. Manchin said he would not support Bernard McNamee because of the nominee’s climate positions.

That move earned Manchin points from Democratic colleagues, various lawmakers said last week. It also may be representative of a broader effort to pull Manchin left on environmental issues like other more moderate Democrats of the past.

Manchin, for his part, said last week he was "not getting any heat" in his view from the progressive groups’ criticisms.

Nowhere is that "greening" phenomenon more evident than in Environment and Public Works Committee ranking member Tom Carper. When the Delaware lawmaker took over for former Sen. Barbara Boxer (D-Calif.) at the beginning of this Congress, green groups expressed reservations with some of Carper’s more moderate energy and environment views.

With robust refining and chemical industries in his state, Carper had taken positions like supporting the controversial Keystone XL pipeline in 2015. That worried climate activists about how he would handle the post on EPW — the panel with most oversight activity on climate change.

As Carper has grown into that EPW role — largely to praise from environmental groups — he did not foresee any untouchable problem with Manchin leading the ENR panel.