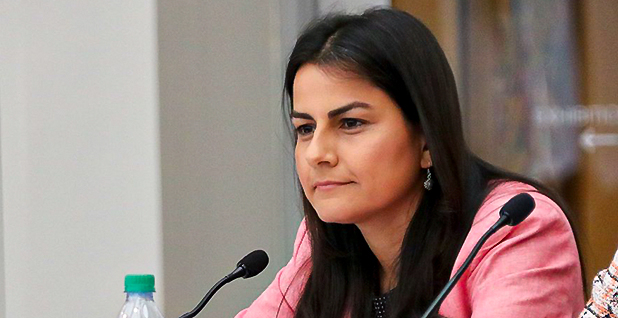 Rep. Nanette Diaz Barragán (D-Calif.) is among the lawmakers blasting the administration’s decision against allowing California to set its own clean car standards. @RepBarragan/Twitter

Congressional Democrats may try to fight President Trump’s decision to block California’s greenhouse gas regulations for cars, even if such action would merely be symbolic.

California Attorney General Xavier Becerra’s (D) expected lawsuit against the revocation of the state’s waiver to the Clean Air Act is the main route for opponents’ challenges, but lawmakers are considering getting in on the action, as well, possibly through the little-used Congressional Review Act.

Trump announced the revocation yesterday via tweet, saying he is doing so "in order to produce far less expensive cars for the consumer, while at the same time making the cars substantially SAFER" (Greenwire, Sept. 18).

Democrats wasted little time plotting how to turn their anger at Trump into legislative action. Rep. Nanette Diaz Barragán (D-Calif.), who called the waiver repeal "a complete disaster," said her office has already started exploring legislative action, but it’s not entirely clear how that would work, or if it would be practical given Republican control of the Senate.

Barragán and several other Democratic lawmakers yesterday said they were unsure whether they would be able to challenge the move under the Congressional Review Act, the 1996 law that gives Congress an expedited path to try to overturn the new regulations and other actions by the executive branch.

"Our office is trying to work on a resolution to condemn the action," said Barragán, a member of the Energy and Commerce Committee, which oversees EPA. "I think there’s been bipartisan conversations about the disagreements over this."

One of those lawmakers involved in those bipartisan conversations is California Republican Rep. Ken Calvert, who has in the past said he would prefer that California be able to keep its standard.

Calvert, a senior appropriator, said yesterday that it remains a "big issue" in his state, but that he is not sure Congress can do much as it plays out in courts.

"I was hoping they could come to some resolution that they could agree to. But unfortunately, that’s not the case. Now it’s going to be in the court for years," he said.

Under the Congressional Review Act, lawmakers can, during a period after a rule is made final, introduce a resolution of "disapproval" that would overturn it.

The resolution would only need 51 votes in the Senate — not the 60 needed for most legislation — and Democrats could force a Senate vote on it, even if Majority Leader Mitch McConnell (R-Ky.) doesn’t approve. That would put lawmakers on record in support or opposition, even if it doesn’t pass.

While the law has mostly been used to overturn regulations, it casts a wide net that can be used to block other regulatory actions, and experts said the waiver revocation probably qualifies.

"I think it’s fairly clear that the revocation of the waiver will be subject to the CRA," said Amit Narang, a regulatory policy expert at the left-leaning group Public Citizen, which opposes the action against California.

Narang cited a recent finding from the Government Accountability Office that a regulatory guidance document is subject to the CRA, and reasoned that the waiver revocation would qualify under the same standards.

But two big hurdles stand in Democrats’ way: The party only has 47 seats in the upper chamber, and the resolution would need Trump’s signature.

"My read is that while Congress could theoretically use the act to block a waiver revocation rule, it’s unlikely that would happen in this case because the act requires disapproval of a rule by a joint resolution of both houses of Congress," said Julia Stein, an attorney at the environmental law clinic at UCLA School of Law.

"While such a resolution might pass the House, it seems unlikely to make it through the Senate," Stein said.

Another way to fight Trump would be for appropriators to put a funding prohibition on the Department of Justice’s antitrust probe of the automakers that made a deal with California to follow stricter emissions standards. But Democrats, too, said they’re largely watching the courts to see what happens next.

Sen. Sheldon Whitehouse (D-R.I.) added that he suspects a legal antitrust battle could reveal the depth of the oil and gas industry’s lobbying on the Trump administration’s fuel economy rollback.

"The California attorney general is going to litigate this very aggressively," he said. "And there is a very good chance that the discovery in that litigation could be very interesting."

Meanwhile, Senate Environment and Public Works ranking member Tom Carper (D-Del.) said he’s going to begin "a round of calls" to auto companies as things move forward. He noted the irony that Republicans, who have long espoused the idea of cooperative federalism, prefer the federal government to take control of California’s standards.

"Fool me once, shame on you. Fool me twice, shame on me," he told reporters. "I mean, they’ve showed their hands on this repeatedly."

However, he said environmental groups have contacted his staff to express concern about such a move.

"We’re hearing from environmental groups that that’s not a good idea," Carper said, declining to go into more detail.

"Most things get tied up in the courts, but I think the administration has been headed in the right direction continuing to get rid of regulations," Barrasso said.

On the House side, at least, Barragán predicted there would be concrete action. "We certainly feel that something needs to be done, and I think you’re going to see action out of Congress," she said.