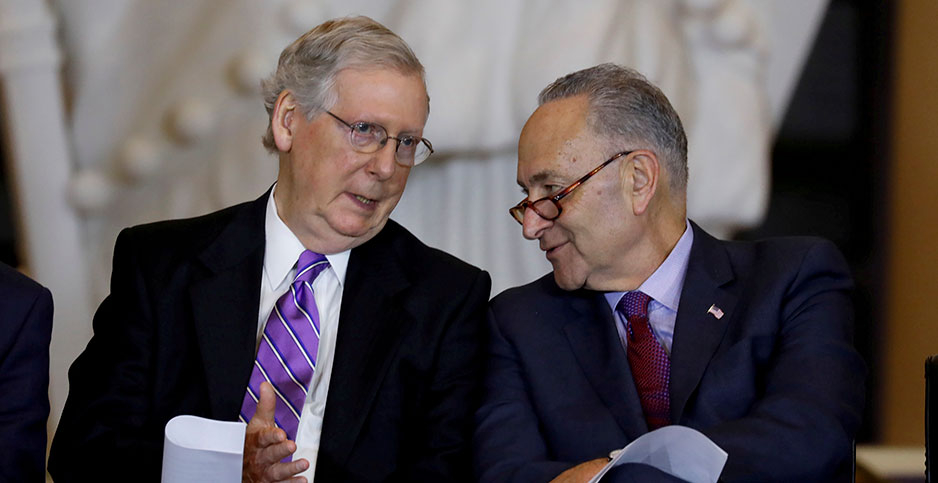 Democratic presidential hopefuls are making big promises on climate change policy, and House Democrats are mapping out their own path come 2021, but no major climate legislation is likely to survive if their colleagues in the Senate don’t capture the upper chamber in this year’s elections.

Democrats and their environmental allies, however, think they’re in striking distance of gaining the four seats they would need to take the majority this year.

That would mean Democrats winning all the races where they are the incumbents — including Sen. Doug Jones (D-Ala.) — plus beating at least four Republicans, such as Sens. Susan Collins of Maine, Cory Gardner of Colorado, Thom Tillis of North Carolina, Martha McSally of Arizona or Kelly Loeffler of Georgia.

With Democrats confident in the House majority and hopeful they can unseat President Trump, they see the Senate as one of the most important hurdles to a climate agenda.

"A Democratic Senate would obviously change that and would free a lot of Republicans who might actually want to do something productive to work with us," he said.

Sen. Catherine Cortez Masto (D-Nev.), chairwoman of the Democratic Senatorial Campaign Committee, said climate is "right up there" as one of the top issues she hears voters around the country expressing concerns about.

"If we hold the House, take the Senate majority, we can absolutely pass climate bills," said Cortez Masto, whose organization is dedicated to helping Democrats win Senate races.

"Look what the House has already done. Democrats have already passed the legislation. It’s just sitting in a legislative graveyard, because Mitch doesn’t want to move on it," she said. "It’s time to start moving policies that matter to this country, and that’s why we’ve got to take the Senate."

Senate Minority Leader Chuck Schumer (D-N.Y.), who would be the presumptive majority leader, has promised to make climate a high priority if his party wins.

"We’re going to have a lot of discussions in our caucus, and we’re going to come to a strong consensus. God willing we win back the Senate, it will be one of the first things we put on the floor," he told reporters last year (E&E News PM, Sept. 27, 2019).

"It’s going to be something that doesn’t just deal with this issue in terms of little bites and little nibbles," he continued.

Nonetheless, the party has given some clues.

House Democrats passed a bill last year to keep the United States in the Paris climate agreement, leaders in the Energy and Commerce Committee have released wide-ranging draft legislation aimed at reaching 100% clean energy by 2050, and the House Select Committee on the Climate Crisis is due to release its own recommendations next month.

The party’s actual chances of taking the Senate are murky at best. For one, the calendar is stacked against it: Out of the seats up for reelection this year, there are almost no states that would be easy to flip from the GOP to Democrats.

"The Senate majority is in play, although Republicans are favored to retain it," said Kyle Kondik, managing editor of Sabato’s Crystal Ball, a project of University of Virginia political science professor Larry Sabato.

"The Democrats do have sufficient targets: Arizona, Colorado, Maine, North Carolina are all credible targets, and Democrats may also be able to put other seats, like Iowa or the ones in Georgia, in play," he said.

"The reason why Republicans are favored, though, is that Democrats probably need to win the vast majority of the truly competitive seats in order to win control," said Kondik.

Recent polling shows Arizona and Colorado as the most likely wins for Democrats. In Arizona, retired astronaut Mark Kelly is challenging McSally. Former Colorado Gov. John Hickenlooper (D) is leading in the primary to take on Gardner, and Hickenlooper is favored to win the general election.

And even if Democrats took the Senate and the White House, their path to major climate legislation might not be straightforward.

That would leave Democrats with few options to pass major legislation on their own. They could use the budget reconciliation process — a plan backed by Sen. Bernie Sanders (I-Vt.), one of the presidential front-runners.

Democrats could also vote to get rid of the filibuster, an idea frequently labeled "going nuclear," though other presidential candidates have shown an openness to it for topics like climate, including former South Bend, Ind., Mayor Pete Buttigieg and Sen. Elizabeth Warren (D-Mass.).

Schumer, asked last year if he’d be open to ending the filibuster, said "nothing’s off the table."

Nonetheless, environmental groups working in Senate races are laser-focused on not just electing the candidates they like, but flipping the majority.

Craig Auster, senior director of political affairs at the League of Conservation Voters, said it is a "huge priority" for the group to get the Democrats into the majority.

"It’s tough to overemphasize how important it is to have a pro-environment majority led by a Democratic leader in the Senate," he said. "Mitch McConnell is probably the biggest impediment to actually making any kind of progress on climate change. He’s totally in the pocket of big coal and other polluters."