Democrats pressure EPA to ease off on chemical regulation 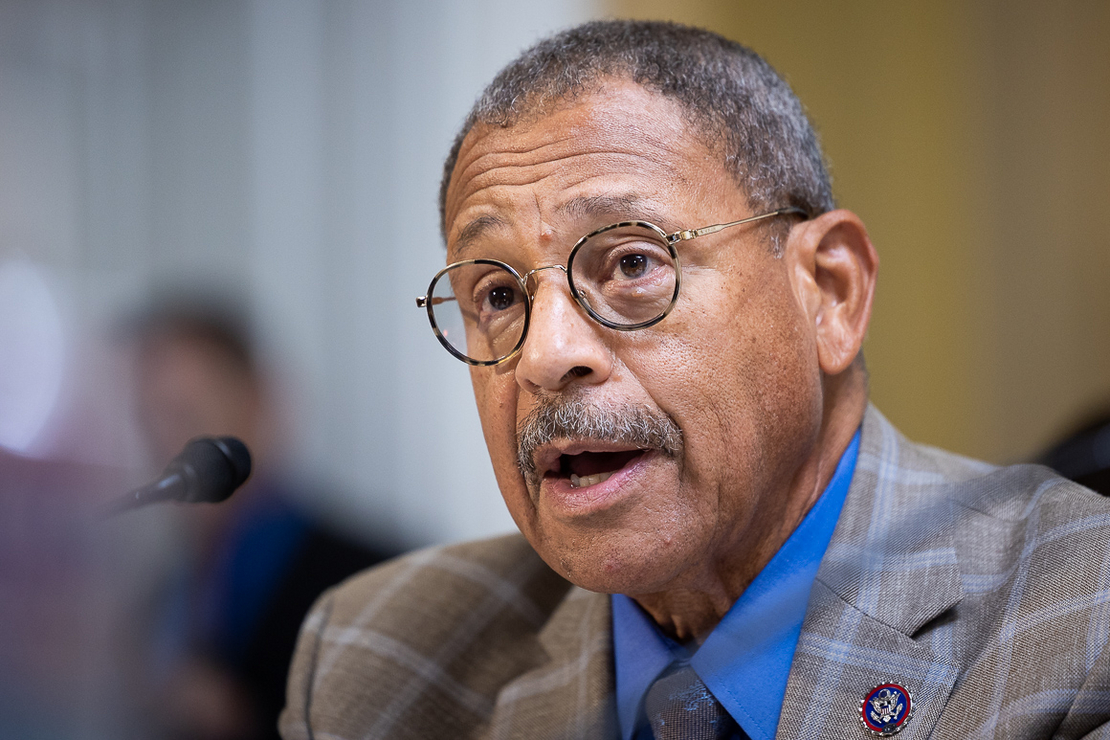 Prominent Democrats have urged the Biden administration to go easy on certain chemicals and toxics despite the party’s focus on public health and the environment, according to correspondence obtained by E&E News under the Freedom of Information Act.

Congressional Republicans are usually skeptical of increased regulation of chemicals, but the letters show members of President Joe Biden’s party have similarly sought a lighter touch from EPA on pesticides and chemicals used in farming.

Many Democrats have showered the administration with letters to increase scrutiny of “forever chemicals.” But some that have also asked for leniency hail from agriculture-heavy congressional districts. Their targets have ranged from notorious substances under intense scrutiny to lesser-known disinfectants.

Citing “the importance of this chemistry and the potential economic impact” to agriculture, forestry and small business in his district, “I am requesting that the EPA provide additional time to allow agencies like the U.S. Department of Agriculture (USDA) and the Food and Drug Administration (FDA) to adequately comment on the draft assessment,” wrote Bishop.

Formaldehyde is a colorless, strong-smelling chemical often used in home-building projects. Despite mounting concerns and research linking the substance to cancer, industry leaders have sought to shield it from aggressive standards.

Bishop — who chairs the Appropriations subcommittee with jurisdiction over the Agriculture Department — also sent a June 7 letter to EPA Administrator Michael Regan, filed as a comment on the formaldehyde review. Bishop again requested additional time for USDA and FDA to weigh in on the assessment.

Calling formaldehyde “a building block chemical” used in “agricultural settings,” including for preserving specimens in labs, disinfecting veterinary clinics and as an additive for animal feeds, Bishop wrote that “conclusions in EPA’s draft assessment around the health effects could result in regulatory actions with enormous economic impacts for this critical economic sector.”

Despite Bishop’s plea, EPA did not extend its comment deadline. And the IRIS draft assessment did indeed ignite anger across industry sectors after determining that breathing formaldehyde can result in a range of health impacts, including nasal cancers and myeloid leukemia (Greenwire, April 14).

In responses to E&E News’ questions for this story, Bishop said agriculture is “a nonpartisan, regional concern” for lawmakers representing farm country.

“I always put the needs and concerns of the people in my district and state first and foremost above partisanship,” Bishop said. “So, my outreach to the EPA is just a part of the overall effort to assist farmers and the agriculture industry in producing safe, abundant, and affordable food and materials.”

On the formaldehyde assessment, Bishop said, “I requested an extension because I believed stakeholders needed more time to review the complex draft assessment.”

The assessment has remained deeply contentious. The National Academies of Sciences, Engineering and Medicine is currently reviewing the EPA draft after the American Chemistry Council panned EPA’s approach and questioned the science underpinning the assessment’s conclusions (Greenwire, May 10).

EPA spokesperson Tim Carroll said multiple agencies and White House offices had the chance to weigh in on the assessment during a consultation process that ended in January. Agencies could also provide input during the comment period and the National Academies review.

Carroll said that when the agency receives requests from members of Congress, aides work across program offices to review and respond accordingly, as encouraged by Regan’s “fishbowl memo” from April last year.

“EPA remains committed to working with our partners in Congress as the agency advances our mission to protect human health and the environment, following the science and following the law in all agency decision-making,” Carroll said.

Bishop has also pressed EPA on chlorpyrifos. The agency banned the pest killer, associated with effects on brain development in children, from food uses. But the Georgia lawmaker requested “regulatory flexibility” for the insecticide, arguing it was the only one registered for use on peanuts that could kill the peanut burrower bug and other insects.

“That is why I am requesting that the EPA consider increasing the six-month grace period in implementing the final rule on chlorpyrifos for uses on commodities for which there is no commercially viable alternative product registration (or combinations of products) available,” Bishop said in a Sept. 13, 2021, letter to Michal Freedhoff, head of EPA’s chemicals office.

Bishop added, “Even a delay of one additional growing season will give peanut producers time to adjust their crop rotation schedules and shift resources to prepare for the necessary shifts in production practices. An additional year of research could also reveal more effective [integrated pest management] and chemical alternatives to chlorpyrifos.”

As with formaldehyde, Bishop’s request was ultimately unsuccessful. EPA has stuck by its decision barring the neurotoxic pesticide’s application on food (E&E News PM, Feb. 25).

“EPA has a job to do and, as an advocate for the agriculture producers in Georgia’s Second District and across the country, I have a job to do,” Bishop said Tuesday. “In writing to the EPA, I was hoping that farmers would have more time before tolerances were revoked for uses on crops for which there is no commercially viable alternative(s).”

Bishop’s office also shared EPA responses to his letters on formaldehyde and chlorpyrifos. The agency thanked the congressman for his letters and said it was following science in its decisionmaking.

Other chemicals have grabbed Bishop’s attention.

He was the lone Democrat to join a letter led by Rep. Vicky Hartzler (R-Mo.) against EPA’s decision to tamp down on atrazine, a weedkiller considered a risk for several endangered species. Critics of the agency’s move charge the herbicide is vital to a variety of farm crops (Greenwire, Aug. 22).

“I happen to believe that we can protect those consumers, our farmworkers, and our endangered species, while also meeting the needs of production agriculture,” Bishop said. “We do that by allowing EPA and other regulatory agencies to do their jobs using sound science and common sense.”

E&E News first reported this summer that the Trump administration had sought to blunt EPA’s initial review of the pesticide, a move later backtracked under Biden (Greenwire, July 21).

Bishop’s advocacy for a relaxed approach to certain chemicals mirrors similar requests from other Democrats.

Rep. Bennie Thompson (D-Miss.), chair of the House Homeland Security Committee, sought help for a Covid-19 virus disinfectant that EPA, during the prior administration, signed off for limited use.

“I write today to bring your attention to what I understand as a life-saving technology called SurfaceWise2, which Allied BioScience owns, and I request your assistance in getting it across the regulatory finish line,” Thompson said in a June 2, 2021, letter to Regan.

Thompson said SurfaceWise2 would be “an essential agent” for protecting against the pandemic at the Southwest border. It serves as “a functional coating,” killing germs on surface areas for up to 90 days.

“While I recognize and appreciate that EPA has been working diligently to approve many products within their oversight, I request you prioritize the ongoing review that would grant unencumbered national access,” Thompson said.

Under former President Donald Trump, EPA eased the approval process for SurfaceWise2, giving the disinfectant the green light through a state-initiated emergency exemption process. In order to do so, its use was limited to American Airlines Inc. planes and two Texas orthopedic practices (E&E News PM, Oct. 14, 2020).

Thompson sought to have that approval expanded, but the Biden administration took the opposite approach. A little more than a month after his letter, EPA ordered the manufacturer to cease sale and distribution of the item, determining it to be in violation of federal regulations (Greenwire, July 9, 2021).

Despite claims of its effectiveness, an EPA investigation into the product had found it “less reliable under real-world conditions, particularly when it is exposed to moisture or abrasion.” EPA revoked emergency authorization in Texas and Oklahoma. The agency later settled with the company this past March, with its maker, Allied BioScience, agreeing to a civil penalty of $253,032.

‘Not the time’ for new restrictions

A group of Democrats, joined by a few Republicans, united behind an effort last year to stave off new rules aimed at herbicides. Rep. Abigail Spanberger (D-Va.) led a letter to EPA about potential registration restrictions for herbicides that could strain the supply chain, cause price hikes and trigger losses for farmers.

“Now is not the time to add additional costs to U.S. farmers that will not only harm agricultural communities but could drive up the cost of food at a time when families are already facing significant increases in the price of essential goods,” the lawmakers, who also included Bishop, said in the Dec. 9, 2021, letter to Regan. “As such, we urge the EPA to reconsider imposing any additional restrictions to herbicide registrations at this time.”

Libby Wiet, a spokesperson for Spanberger, told E&E News that EPA was “extremely responsive” and “immediately met” with the congresswoman’s staff. The agency affirmed it would not make changes to herbicide policy before the 2022 growing season and would discuss any changes with growers and producer groups, said Wiet.

“Abigail was encouraged by EPA’s engagement on this issue and continues to work with the agency and producers to ensure that we appropriately balance the needs of our food system with the important goals of protecting our planet,” Wiet said.

EPA sent a July 5 response to the lawmakers’ letter, in which Freedhoff offered reassurance while also emphasizing her office’s commitment to “transparency and scientific integrity,” along with public health.

Freedhoff noted that EPA renewed registrations for Enlist Duo and Enlist One, two herbicides used to control weeds around crops. She cited that move as an example of the agency’s willingness to work with farmers and ranchers while taking into account the benefits offered by a product.

Some herbicides have remained more contentious. Dicamba has been a particular source of concern, and an August draft ecological assessment raised major concerns regarding the weedkiller’s threat to honeybees (E&E News PM, Aug. 18). EPA is still taking comments on those findings, but internally staff have pushed back on the product’s registration.

Other herbicides are also in peril. Glyphosate, better known under the name Roundup, has already drawn significant litigation over cancer concerns, and the pesticide’s long run on the market could face further setbacks soon.

EPA said in September that it would withdraw an interim Trump-era decision for the product’s continued use (Greenwire, Sept. 23). While that has not impacted its immediate use, any negative findings could hinder glyphosate’s staying power.