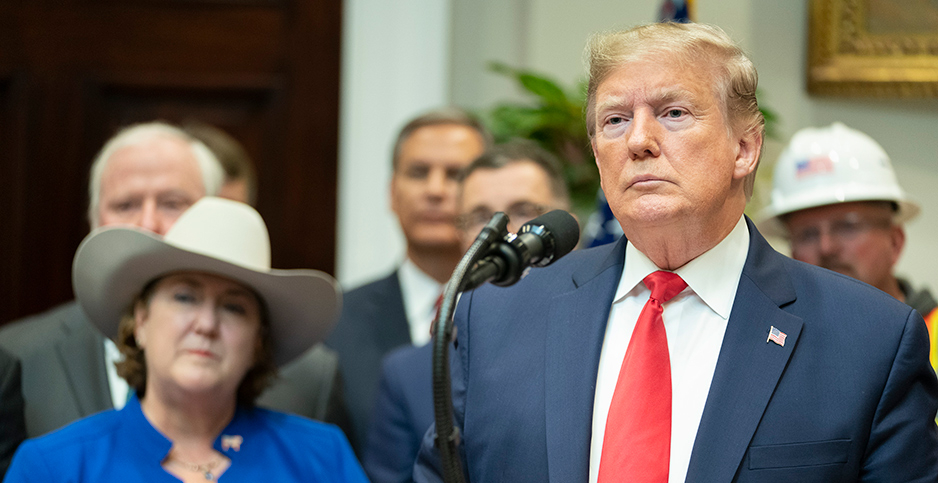 Congressional Democrats are eyeing a legislative response to the Trump administration’s proposed National Environmental Policy Act overhaul, a sign of the fight to come over one of the president’s marquee deregulatory moves.

Several lawmakers said yesterday that a Congressional Review Act resolution would eventually be on the table after the Council on Environmental Quality proposed to update its NEPA regulations for the first time in decades.

For Rep. Debbie Dingell (D-Mich.), the proposal is personal. Her late husband, the legendary Democratic Rep. John Dingell, was one of the original architects of NEPA.

Debbie Dingell said she’s planning to introduce a resolution to reverse the Trump administration’s proposed changes. "I’m not going to let them take NEPA back," she said.

The plan, unveiled at a White House event yesterday, marks a potentially seismic shift in the permitting process across the federal government.

NEPA rules lay out the process for environmental reviews and public input at every federal agency. The new proposed guidance from CEQ was one of the top directives from President Trump’s 2018 infrastructure plan. It features ideas congressional Republicans have been talking about for years.

But it has set off a frenzy among environmental groups and Democrats, who fear the changes will effectively eliminate consideration of greenhouse gas emissions and climate impacts in environmental reviews (Greenwire, Jan. 9).

"This means more polluters will be right there, next to the water supply of our children," said House Speaker Nancy Pelosi (D-Calif.). "That’s a public health issue. … They are going to not use the climate issue as anything to do with environmental decisionmaking."

As with any federal rulemaking, lawmakers have relatively little recourse, aside from weighing in like anyone else during the coming public comment process.

But Democrats could also turn to the CRA, which gives Congress 60 legislative days to overturn federal rulemakings with a simple majority vote.

Dingell said she didn’t know yet whether her legislative response would be under the CRA or via another channel.

Natural Resources Chairman Raúl Grijalva (D-Ariz.), who is in talks with her about a legislative response, said a CRA vote would effectively be the only way to "make it permanent so they can’t keep messing with it."

Still, that would likely have to wait until CEQ issues its final rulemaking, expected later this year. And although Democrats might be able to overturn the proposal if they sweep the 2020 elections, Trump and the GOP Senate will be fighting them on it as long as they’re in office.

"We’re far away from that review period," Cardin said. "Obviously, our first line of attack is for them to change [the proposal], or a legal challenge, and then it would be the CRA if we have to."

Some of the biggest proposed changes are exactly what Trump laid out in his 2018 infrastructure plan that was hyped as a legislative blueprint for the GOP, which controlled both chambers of Congress at the time.

It has congressional Republicans excited, especially because they didn’t have to lift a legislative finger.

CEQ’s proposal would limit page counts for the most intensive environmental reviews and mandate that they take under two years in most circumstances.

It would also require a single record of decision for reviews that involve multiple agencies, an idea Trump first suggested in a 2017 executive order.

"This proposal establishes that standard," he said. "These updates will reduce red tape so important infrastructure projects get done better, faster, cheaper, and smarter."

Energy companies and trade organizations are, not unexpectedly, happy with changes that could help them build out infrastructure more quickly. But permitting changes don’t always cut directly across party lines.

Labor groups, generally a key Democratic demographic, have come out in support of the NEPA rewrite, diverging from progressives and congressional Democrats (E&E News PM, Jan. 9).

Some advocates at the Bipartisan Policy Center also argued yesterday that the changes could actually aid efforts to fight climate change — because they would speed permitting for the massive amount of new clean energy infrastructure needed to decarbonize the economy.

To that end, Amy Farrell, senior vice president of government and public affairs for the American Wind Energy Association, said her organization is eager to work with the Trump administration to "advance infrastructure permitting reform."

"Infrastructure projects, including land-based and offshore wind energy and transmission development, have encountered unreasonable and unnecessary costs and long project delays," she said in a statement. "It is time to update and modernize the permitting process, which would both strengthen our economy and enhance environmental stewardship."

At issue for most Democrats and environmentalists, however, is CEQ’s proposal to nix consideration of "cumulative" or "indirect" impacts.

CEQ Chairwoman Mary Neumayr said yesterday that the language would not prevent consideration of greenhouse gas emissions. But many on the left said they weren’t buying it at a time when the destruction wrought by climate change is increasingly evident in the economy.

The NEPA proposal came one day after NOAA released a report that noted there were 14 extreme weather events in 2019 that each caused more than $1 billion in damage.

NOAA’s analysis is the latest detailing the mounting costs of extreme weather events during the past decade, including a 2019 Government Accountability Office review requested by Cardin that found taxpayers are increasingly on the hook because of the federal government’s lack of a resilience strategy (Greenwire, Nov. 22, 2019).