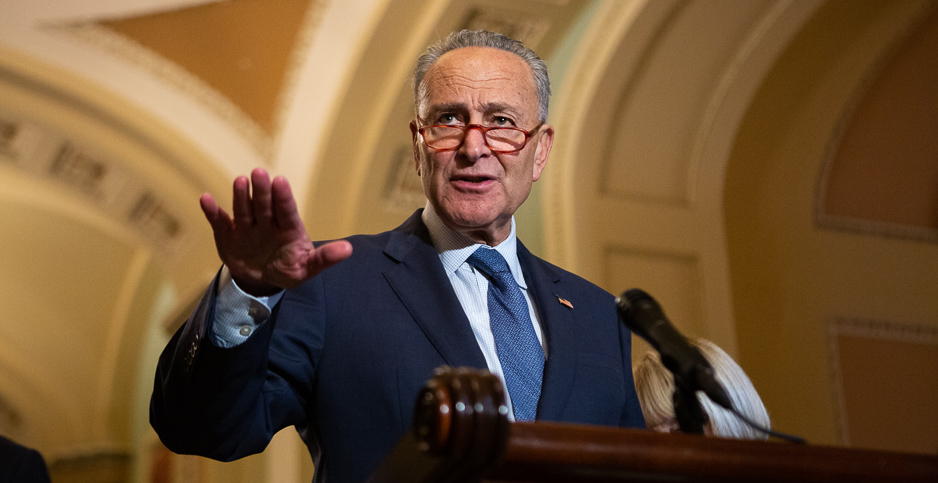 Senate Minority Leader Chuck Schumer last night introduced a proposal to boost sales of clean cars, in a rebuke to the Trump administration and a sign of Democrats’ broader strategy on climate change legislation.

The New York Democrat proposed a program called "Clean Cars for America," which would provide rebates for consumers to trade in their old gas guzzlers for new zero-emission vehicles.

The $400 billion program would help take more than 63 million gas-powered vehicles off the road over 10 years, according to Schumer’s office.

The proposal stands to counteract the deregulatory agenda of the Trump administration, which is seeking to roll back federal clean car standards.

It would be included in a comprehensive package of climate legislation that could pass in 2021, when Democrats could control both chambers of Congress and the White House.

Schumer last month promised to bring a "big, bold" climate bill to the floor if Democrats win back the Senate and he becomes majority leader in 2021 (E&E News PM, Sept. 27).

"Scientists tell us that to avoid the most devastating effects of climate change, the world needs to be carbon neutral — to have net-zero carbon dioxide emissions — by midcentury," Schumer wrote in an opinion piece in The New York Times last night trumpeting his idea.

"At the moment, we are not remotely on track to meet that target," said Schumer. "We need to act urgently and ambitiously, which will require building diverse coalitions of political support."

Schumer added that the overarching goal of the proposal was that "by 2040 all vehicles on the road should be clean."

The new program would allow consumers to receive a rebate worth $3,000 or more after visiting an auto dealership and trading in their gas-powered car for a plug-in hybrid, battery electric or hydrogen fuel-cell vehicle.

Under the terms of the program, the gas-powered car would need to be at least 8 years old. Consumers would receive an additional rebate for buying a new vehicle that was made in America using strong labor standards, and low-income families would be eligible for an additional $2,000 voucher.

In addition, the program would provide $45 billion to states, cities and municipalities for building out electric vehicle charging infrastructure, according to Schumer’s office.

The proposal is likely to inspire déjà vu for Hill staffers and others who were active on transportation policy 10 years ago.

The legislation, dubbed the "Consumer Assistance to Recycle and Save (CARS) Act," was commonly referred to as the "Cash for Clunkers" stimulus program.

"When the companies came out of bankruptcy, there was a lot of concern about consumer confidence, whether or not the companies would last and whether or not people should buy their vehicles," Sen. Debbie Stabenow (D-Mich.), who sponsored the 2009 legislation, told E&E News.

"Cash for Clunkers came out right at the time that they came out of bankruptcy and did more to get people back into showrooms purchasing vehicles probably more than anything else we could have done," she said.

Stabenow recalled that the bill faced opposition from Senate Republicans. But thanks to the involvement and support of then-Senate Majority Leader Harry Reid (D-Nev.) and then-President Obama, it was able to clear the 60-vote threshold.

"The last time we did that, I supported it," he said. "We were at the bottom of a Great Recession. We had GM and Chrysler about to go into bankruptcy. And the argument that was made for it then was not so much an environmental argument for lowering emissions, but for helping to keep the auto industry alive in this country."

That economic argument may not be as compelling today, as automakers rake in billions of dollars in profits, Carper said.

"That’s not a challenge today; that’s not a concern today," he said. "Chrysler, GM and Ford are doing quite well."

Several environmentalists — and at least two automakers — praised Schumer for seeking to revive the program.

"Democratic Leader Schumer’s proposal is a big and welcome piece of a needed solution," Tiernan Sittenfeld, senior vice president of government affairs at the League of Conservation Voters, said in a statement.

"This comes at a critical time and stands in stark contrast with the Trump Administration’s efforts to roll back clean car standards and stand in the way of American innovation."

Gina Coplon-Newfield, director of the Sierra Club’s Clean Transportation for All program, said in a statement: "Leader Schumer’s Clean Cars for America legislation boldly addresses pollution from the transportation sector while continuing to grow the booming clean energy economy, and the Sierra Club is proud to support it."

GM also offered a supportive statement, saying, "We appreciate the leadership of Senator Schumer and his efforts to advance electrification through much-needed infrastructure investments, consumer incentives and promotion of American electric vehicle manufacturing."

Curt Magleby, vice president of U.S. government relations at Ford Motor Co., said Schumer’s plan would help the company as it invests $11.5 billion "to grow our electrified vehicle portfolio" and seeks to build the "largest public charging network in the U.S."

But Dan Becker, executive director of the Safe Climate Campaign, expressed concern that lawmakers would tack on amendments that would significantly weaken the Schumer bill.

"By the time all the amendments and weakenings were wrought on the Sutton bill, there were a lot of gas-guzzling vehicles sold when slightly less efficient cars were brought in," Becker said. "So it was not a boon to the environment at all. But it did enrich automakers and dealers, who were able to move cars that they were having trouble selling during the recession."

He added: "Chuck Schumer means well. He wants to do a good thing for the environment. But it was a fiasco last time."

In 2013, the Brookings Institution conducted an analysis of Cash for Clunkers that found the program had a limited environmental impact.

"Total emissions reduction was not substantial because only about half a percent of all vehicles in the United States were the new, more energy-efficient CARS vehicles," Brookings wrote. "The program resulted in a small gasoline reduction equivalent only to about 2 to 8 days’ worth of current usage."

Other retrospective surveys of Cash for Clunkers have reached different conclusions. For instance, the Government Accountability Office found in 2010 that the average fuel efficiency of new vehicles purchased under the program was much higher than that of the old vehicles, although the improvement wasn’t necessarily a "direct result" of the program.

The Alliance of Automobile Manufacturers, a powerful trade association whose members include Ford and Fiat Chrysler, declined to comment on the Schumer plan.