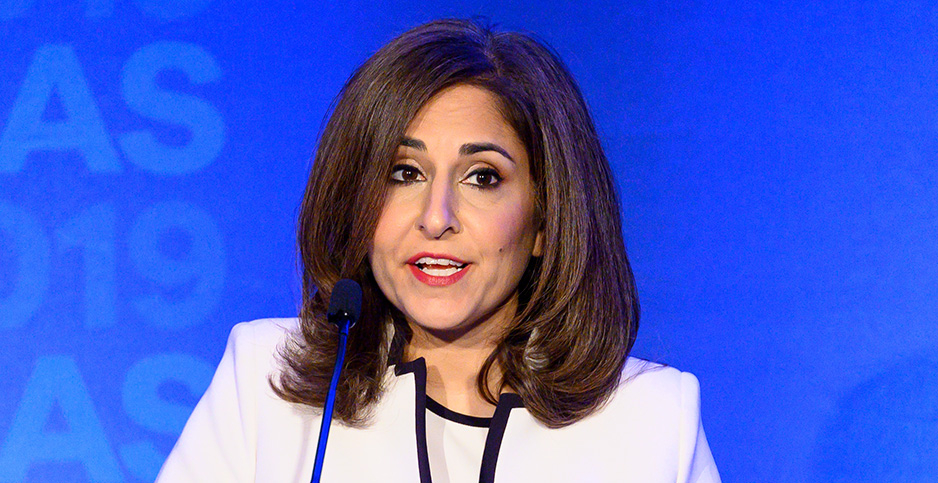 President-elect Joe Biden will nominate Neera Tanden, president of the Center for American Progress, to lead the Office of Management and Budget. Michael Brochstein/Sipa USA/Newscom

Senate Democrats are stepping up to defend Neera Tanden after she emerged as one of President-elect Joe Biden’s more controversial picks.

Biden yesterday confirmed he intends to nominate Tanden to lead the Office of Management and Budget, which has broad powers over the government and regulations.

Republicans were quick to express concern about someone who has been outspoken on Twitter and a frequent cable news presence as head of the Center for American Progress.

"The American people decisively voted for change — Mitch McConnell shouldn’t block us from having a functioning government that gets to work for the people we serve," Brown said, referring to Senate Majority Leader Mitch McConnell (R-Ky.).

The Republican side focused on Tanden’s tweets against members of the GOP, who will likely be key in confirming her next year.

An aide to Sen. John Cornyn weighed in Sunday night, and yesterday the senator himself criticized Biden’s choice in comments to reporters.

The Texas Republican described Tanden as "radioactive" and the "worst nominee so far," and noted now-deleted tweets.

"I think, in light of her combative and insulting comments about many members of the Senate, mainly on our side of the aisle, that it creates certainly a problematic path," he told reporters.

"I think it’s really a misstep by the administration," Cornyn added. "I think most Republicans are open to any reasonable nominee by the incoming administration."

Cornyn also complained that there had not been "at least some consultation" with Republican senators from the Biden team.

"I mean some of these problems can be avoided and people, you know, saved from the embarrassment if there is simply some consultation on who they’re thinking about," he said.

Sen. John Thune (R-S.D.), a member of the leadership team, said it was "awfully early to speculate about any of these folks."

Sen. Lindsey Graham (R-S.C.) joked that Tanden "had a lot to say" about him but brushed it off. "I’ve got a thick skin," he said, and reserved comment until after the Electoral College confirms Biden as the winner of the presidential election.

Sen. Susan Collins (R-Maine) said: "I did not know her, much about her, but I’ve heard that she’s a very prolific user of Twitter."

Senate Minority Leader Chuck Schumer (D-N.Y.) said Biden deserved to have at least some Cabinet members confirmed on Inauguration Day or soon after.

"Republicans are twisting themselves into pretzels to explain their opposition. Neera Tanden, the first woman of color to run the OMB, is so eminently qualified that some on the Republican side have taken issue with comments she made on Twitter," said Schumer.

"If Republicans are concerned about criticism on Twitter, their complaints are better directed at President Trump."

Observers have pointed out that Senate Republicans have confirmed OMB picks under the current administration with strong partisan pasts.

Some activists on the left don’t like Tanden either. Allies of Sen. Bernie Sanders (I-Vt.) see her as a long-time opponent of their movement. And leaked emails in 2016 revealed candid conversations with CAP founder John Podesta. Still, Democrats are generally rallying around her.

Sen. Gary Peters (D-Mich.), ranking member of the Homeland Security and Governmental Affairs Committee, which has jurisdiction over OMB nominees, pointed to the office’s handling of issues like per- and polyfluoroalkyl substances and climate change.

"I appreciate that President-elect Biden has chosen Neera Tanden, a highly qualified nominee, to lead this important department, and I look forward to the confirmation process," said Peters.

House Budget Chairman John Yarmuth (D-Ky.) said the next OMB leader would "need to quickly put the agency back on the right side of the law and reestablish the important role of career officials, while working to help restore faith in our democratic institutions and ensure our nation’s budget will build a better, stronger and more just economy."

He said, "Neera Tanden is up to the task."

Tanden herself wrote on Twitter about her selection: "After my parents were divorced when I was young, my mother relied on public food and housing programs to get by. Now, I’m being nominated to help ensure those programs are secure, and ensure families like mine can live with dignity."