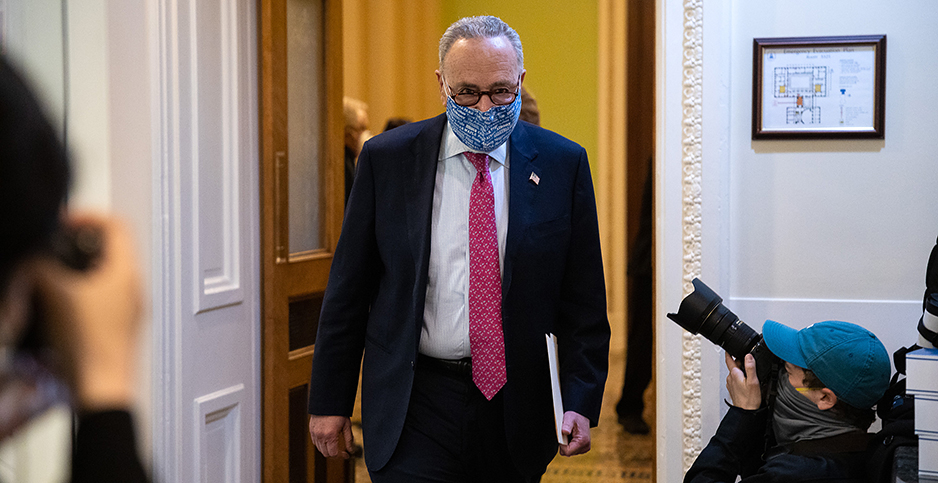 Democrats are eyeing the budget reconciliation process for COVID-19 relief legislation, but climate might have to wait for round two.

Senate Majority Leader Chuck Schumer (D-N.Y.) said yesterday that the Senate could vote "as soon as next week" on a budget resolution that would pave the way to pass a relief bill through the Senate with a simple majority.

In the House, Majority Leader Steny Hoyer (D-Md.) announced a schedule change for next week to accommodate pandemic action through reconciliation.

The Biden administration has proposed a $1.9 trillion COVID-19 plan, and as committees get to work on legislative language, Republicans have already expressed reservations about the massive spending levels and an included proposal to raise the federal minimum wage to $15 an hour.

"We’re keeping all options open on the table, including using budget reconciliation," Schumer told reporters. "The first step to pursuing COVID relief legislation through reconciliation would be to pass a budget resolution."

It would be the first of two chances that Democrats have in the coming months to move a budget resolution — one for the current fiscal year and one for fiscal 2022 — that would initiate the reconciliation process.

Democrats said yesterday that they are focused on moving quickly to an economic recovery package, particularly with nominations and the impeachment trial for President Trump looming next month, which could kick climate and green infrastructure to the second round of reconciliation.

He signaled, however, that Democrats would seek to use it for a broad set of policy priorities. Republicans, Sanders said, used the process to pass the 2017 tax cut bill and in their attempt to repeal the Affordable Care Act.

Each budget resolution drawn up by Sanders’ panel would direct committees of jurisdiction to come up with programs that affect spending and revenue for a reconciliation bill.

Democrats and advocates have long seen a carbon tax as an appealing option for that process because it’s a policy that could likely pass the "Byrd rule," the procedural rule that dictates what kinds of provisions are allowed in a reconciliation bill (E&E Daily, Jan. 7).

Schumer also said earlier this week that he is looking at how to make Biden’s "Build Back Better" infrastructure and climate plan fit into the process (E&E Daily, Jan. 26).

Sen. Brian Schatz (D-Hawaii), chairman of the Democrats’ Special Committee on the Climate Crisis during the last Congress, said climate action, generally, fits well with the reconciliation rules because it can center on taxes and spending.

And with reconciliation on the table, there would be no reason for Democrats not to get it done with their narrow majority in the 50-50 Senate, even if they can’t get Republicans to support climate legislation, he said.

"You don’t need to do much on the authorizing side," Schatz told reporters. "We already have policy in place, so it just so happens that this particular urgent priority works within reconciliation, unlike some other important priorities that I think would be a harder sell for the parliamentarians."

But addressing climate change is also larger than any single bill, Schatz said, and Democrats will be pushing it in debates over infrastructure in the coming months and in appropriations bills.

Democrats and the Biden administration are going "back and forth" already on putting together a green infrastructure bill, Schatz said.

"But I think it’s also fair to say that 93% of our attention is on the COVID relief package," he added. "And then the remaining bandwidth is for the nominees."

The first budget resolution is coming together quickly, but if history is any indication, the full reconciliation process could take weeks, if not months, to play out.

When former President Trump came to office in 2017, for example, Republicans put together a budget resolution with reconciliation language in early January, kicking off the process before he was even inaugurated.

The GOP used that bill to attempt a repeal of the Affordable Care Act. It ultimately failed with a memorable "no" vote from the late Sen. John McCain (R-Ariz.) in July — seven months after the initial budget resolution.

Republicans made another attempt at reconciliation later that year, passing their tax cut bill in December of 2017.

"It takes time to do a budget resolution reconciliation bill, conference it, go all the way through," said Bill Hoagland, a senior vice president at the Bipartisan Policy Center and a former top GOP Senate Budget Committee aide, during a virtual event earlier this month.

Complicating the process for Democrats this time around is the impeachment trial, which will suck up floor time next month.

Moderates may also be hesitant to use reconciliation, particularly for an issue like infrastructure, which typically involves authorizing language that would not make it through the Byrd Rule.

"I tend to be a regular order guy," said Senate Environment and Public Works Chairman Tom Carper (D-Del.), who will play a key role in drawing up a surface transportation bill.

"My first inclination would be to go regular order, and at the end of the day, if that doesn’t work, then to consider other options," Carper told E&E News.

But Schumer said he’s looking to move legislation quickly, starting with COVID-19 relief, whether or not Republicans play ball.

"We’re always hopeful that some of them will see the light," Schumer told reporters. "And remember, even on reconciliation, Republicans can join us and vote for it."