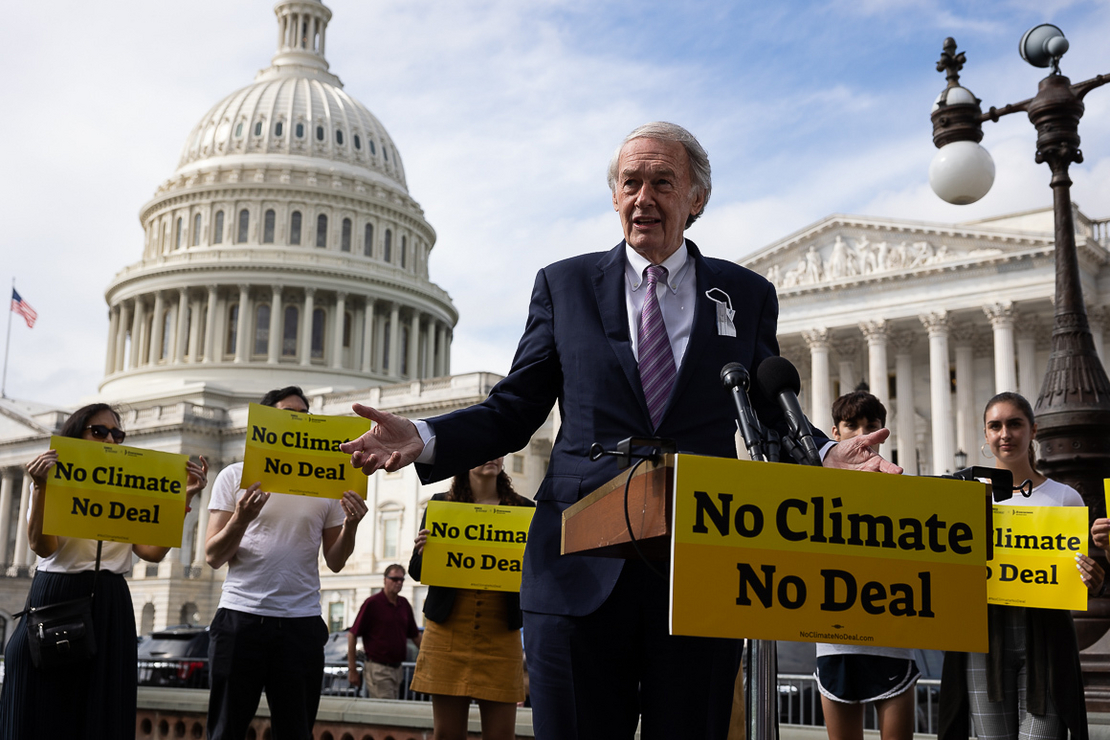 A group of Senate Democrats yesterday dug in their heels against potential cuts to climate programs in the reconciliation package, as a stare down continues with West Virginia Democratic Sen. Joe Manchin and other moderates.

“There isn’t a middle ground between a livable and unlivable world. We cannot pass the bipartisan infrastructure bill without the reconciliation package,” Sen. Ed Markey (D-Mass.) said during a news conference with environmental groups and Sens. Tina Smith (D-Minn.) Ron Wyden (D-Ore.) and Chris Van Hollen (D-Md.). “We cannot slash climate funding in this package.”

Among the provisions that need protecting, Markey said, are the Civilian Climate Corps, a green bank, proposals to toss out fossil fuel tax breaks and a list of other climate policies. The rallying cry, in short, was "no climate, no deal."

The event, hosted by Evergreen Action and the Sunrise Movement, offered a warning shot of sorts, as the White House and top congressional Democrats negotiate the details of a reconciliation package with Manchin, chair of the Energy and Natural Resources Committee, and Sen. Kyrsten Sinema (D-Ariz.).

The rally came just a day after Budget Chair Bernie Sanders (I-Vt.), a progressive who caucuses with Democrats, blasted Manchin at length for his “vague” demands in talks on President Biden’s signature bill (E&E Daily, Oct. 7).

Markey was also particularly critical of any suggestion that natural gas be included in the package. “Let me be clear: Natural gas is not clean energy, and it is not climate action,” Markey told reporters.

Biden is currently negotiating down from the $3.5 trillion topline spelled out in the House reconciliation bill, which has sparked fears among progressives that entire programs could get pulled, or that cuts could be imposed across the board for policies to address climate change and a huge variety of social issues (E&E Daily, Oct. 6).

Manchin, meanwhile, is insisting on $1.5 trillion in overall spending and has said the tax provisions should be more inclusive of coal, natural gas and carbon capture, and should not end tax breaks for fossil fuels. He also has taken issue with the Clean Electricity Performance Program, or CEPP, the bill’s signature decarbonization policy for the power sector.

Markey and other climate hawks, as they have for weeks, generally refrained yesterday from direct criticisms of Manchin, instead saying they are willing to hear out his concerns.

“I really do believe that he is negotiating in good faith, that he’s trying to figure out how we can find common ground, and that’s what you can ask for,” Smith, one of the architects of the CEPP, said in an interview.

But ultimately, Smith and Markey said, they need to see climate change addressed on a scale big enough to meet Biden’s decarbonization targets.

“We don’t only need Sen. Manchin’s support for this bill,” Smith said. “We need my support.”

Democrats will need to rally that support quickly if they want to give Biden something to take to the United Nations climate talks next month.

Biden has pledged to reduce emissions 50 to 52 percent under 2005 levels by 2030, and the polices in the reconciliation package would almost certainly need to play a big role if the United States is to meet that target (E&E Daily, Sept. 17).

The negotiations, however, are in a murky place, particularly given that Manchin has not articulated exactly how he would change the CEPP.

“We can’t throw caution to the wind on reliability, that’s all I’m saying,” Manchin told E&E News this week. “And I’m not going to put my state or my country in jeopardy of not having the power that we need to take care of ourselves and keep our families healthy, but also the jobs that we need. We’ll work through all this.”

Smith said the version of the policy that emerges from Senate talks is likely to be different than the House CEPP proposal, which would provide grants to utilities who deploy at least 4 percent more clean energy each year and fine those who do not. She also signaled she is open to fossil fuel generation with carbon capture.

“One of the differences is that there would be more room in the proposals that we’ve designed so far in the Senate for carbon capture technology on coal or natural gas,” Smith said.

“There’s more room for us to move forward on carbon capture, and if those carbon capture tax credits in Sen. Wyden’s committee were robust enough, then that would have a big impact on the feasibility of those proposals over the next 10 years,” Smith added.

Wyden, who chairs the Finance Committee, noted that the tax proposal he’s pushing in reconciliation, S. 1298, would repeal existing energy credits in favor of a technology-neutral approach centered on reducing emissions, an idea Manchin has backed.

“Sen. Manchin, even in some of these documents, has emphasized what’s called technology neutrality,” Wyden said, referring to a leaked memo spelling out Manchin’s requests for reconciliation (E&E Daily, Oct. 1).

“That’s what we’re doing with our agenda,” Wyden said. “What we’re saying is, if you can reduce carbon emissions, you get the savings.”

Climate policies, including the carbon price Wyden is developing with Sen. Sheldon Whitehouse (D-R.I.), could also appeal to Manchin as pay-fors, given his concerns about inflation and federal deficits.

Van Hollen told reporters Manchin has not ruled out his “Polluter Pays Climate Fund Act,” a proposal to tax major greenhouse gas emitters based on their past contributions to climate change (E&E News PM, Aug. 4).

“I’ve talked to Sen. Manchin about it,” Van Hollen said. “He has not rejected it.”