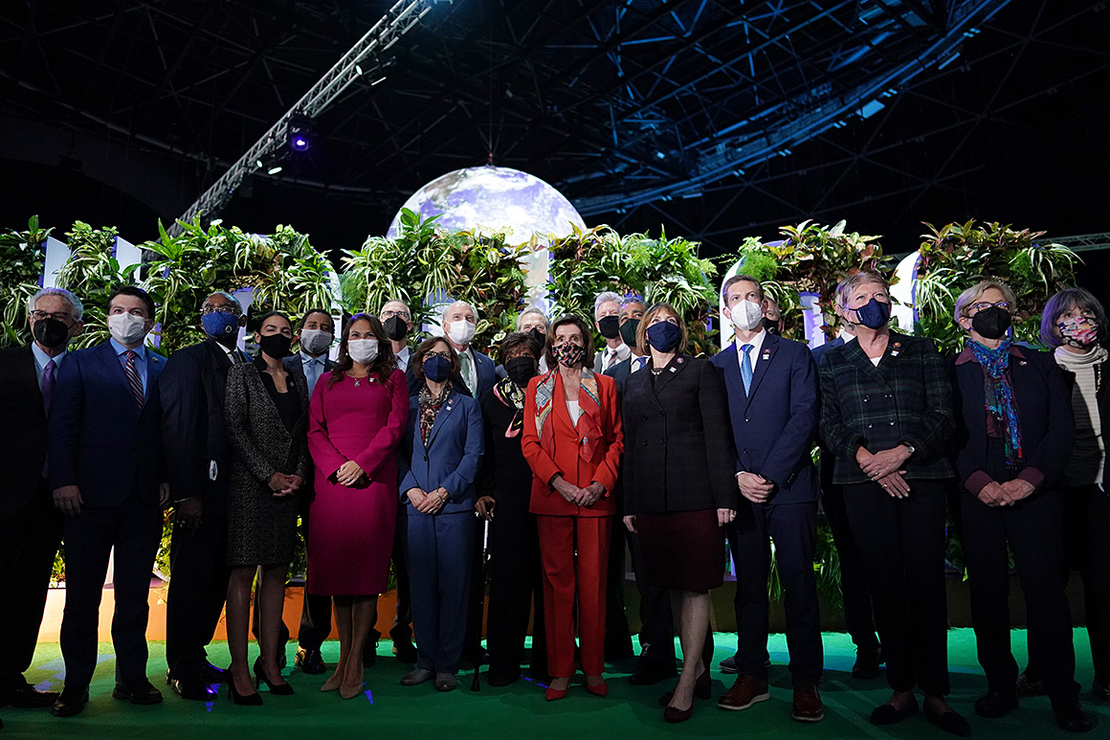 Democrats emerged from United Nations climate talks in Glasgow, Scotland, bubbling with optimism about their prospects to deliver legislation to slash greenhouse gas emissions, but significant hurdles remain for Congress to back up U.S. diplomacy with action.

The global community will be watching Congress closely after the talks, known as COP 26, closed this weekend, as Democrats attempt to finalize a social spending package that would be the most ambitious climate bill ever passed in the United States.

With that in mind, dozens of congressional Democrats traveled to Scotland last week, where they met with high-level U.N. officials and global leaders to convince the world that they will deliver on President Biden’s pledge to halve emissions by 2030. The sales team included multiple Senate delegations, as well as a group of more than 20 House Democrats, led by Speaker Nancy Pelosi (D-Calif.) (Greenwire, Nov. 9).

“The reception there was overwhelmingly positive,” House Select Committee on the Climate Crisis Chair Kathy Castor (D-Fla.) said in an interview after returning from Scotland on Friday. “For example, members of the European Parliament who we met with, they went out of their way to say, ‘Thankfully, the U.S. is back. We need you as a strong partner to meet the scientific imperative and reduce greenhouse gas emissions.’”

But that doesn’t mean the rest of the world is taking Congress’ word for it, and the challenge for climate policy now is domestic.

House Democrats are hoping to pass the $1.7 trillion reconciliation package — which includes some $555 billion for climate and clean energy — this week. That would send it on to the 50-50 Senate, where Energy and Natural Resources Chair Joe Manchin (D-W.Va.) has raised concerns about key climate provisions and where slow procedural timetables could push consideration of the bill into December.

“The general message was cautious relief that the United States is engaging and I think some anxiety that the really big decisions remain yet to be made,” Sen. Sheldon Whitehouse (D-R.I.), another attendee, said in an interview.

The final Glasgow agreement struck over the weekend for the first time asks world leaders to strengthen their emissions commitments next year, rather than in 2025. It also explicitly points to fossil fuels as the diver of rising temperatures — calling for a first-ever “phase down” of unabated coal — and boost pledges from the developed world to fund adaptation projects in nations on the front lines of climate change (Climatewire, Nov. 13).

But the talks were met with some skepticism. The United States did not agree to stop developing domestic coal, and the fossil fuel language was weakened in the final deal, calling for a “phase down” rather than “phase out” of coal.

Developing nations, meanwhile, had been seeking commitments for funding for loss and damage that was ultimately left out of the agreement, and on the whole, the talks did not put the world on a path to limit warming to 1.5 degrees Celsius — the scientific benchmark to avoid the worst impacts of climate change.

“There’s a recognition that the commitments that are being made by all the countries in the world will be the biggest commitments ever made, the biggest improvement. With each additional COP, we go a little bit further, we get a little bit closer to keeping 1.5 alive, as they say,” Rep. Sean Casten (D-Ill.) said in a post-COP news conference. “But there’s also a recognition that it is not yet sufficient.”

Casten, a member of the Climate Crisis panel, acknowledged that the positive messaging from the United States was met with some skepticism about domestic midterm politics and about Manchin, who could control much of what ultimately gets done on climate.

“The hard questions that we consistently got were why didn’t the United States sign on the pledge to stop financing coal plants, because we who acknowledged the science don’t understand why you wouldn’t do that?” Casten said. “How much are the commitments of the United States going to be durable if the House flips to be controlled by people who deny science?”

But the U.S. presence at COP 26 was significant after four years of near-total disengagement under former President Trump.

They met with U.S. climate envoy John Kerry, U.N. Secretary-General António Guterres and COP 26 President Alok Sharma, as well as a variety of environmental activists and officials from around the world, Castor said.

Rep. Chellie Pingree (D-Maine), another member of the House delegation, said the international community was welcoming after four years of fossil fuel cheerleading from the Trump administration. Delegates from other nations, she said, saw the sizable presence from the U.S. as a sign of its commitments.

"There are occasional questions about the durability of any decisions that we make, because there’s always this worry that we have an administration change and what will happen,” Pingree said in an interview. “But I think the farther we get down this path of understanding the urgency around taking action on these things, the harder it will be even for a subsequent administration to try to pull this back.”

Heading into the next few crucial weeks of negotiation on the reconciliation bill, the questions will be about what, exactly, Congress can get done on emissions.

The package House Democrats are pushing to pass this week contains $555 billion in climate spending and tax provisions, the largest single portion of the bill and by far the largest investment the nation has ever made in reducing emissions and preparing for the effects of climate change.

But with Manchin’s opposition, key provisions from the initial proposal floated months ago have been stripped out and changed as the topline spending has shrunk to roughly $1.7 trillion.

That includes the Clean Electricity Performance Program, or CEPP, a marquee power sector decarbonization program now nixed from the bill, and the methane fee, which has been tweaked to include new subsidies for oil and gas to reduce methane emissions.

The bill has changed since then, and while the demise of the CEPP could leave in doubt the president’s emissions plans, Democrats remain hopeful that the reconciliation package will drastically cut emissions in the next decade, particularly when paired with regulatory action from the Biden administration.

“The clean energy tax credits are going to be central to it, and fortunately, a lot of the utilities out there have already made their pledges,” Castor said, referring to varying promises by electric utilities to hit net-zero emissions in the coming decades. “This will come along beside that and supercharge that.”

But Castor said she also expects Congress to do more down the road on issues like deforestation and methane abatement.

“You pass ‘Build Back Better,’ and then we have to wake up the next day and do a lot more,” Castor said, referring to the reconciliation package.

To that end, Pingree, the House’s top EPA and Interior appropriator, carried a cheat sheet with her to the COP 26 climate talks last week.

It outlined increases for climate and conservation programs across the government. For example, climate change spending at Interior Department bureaus would more than double under the House’s proposed spending plan to $356 million in fiscal 2022. Pingree said she would often cite those numbers at meetings, as well as plans to hike EPA spending next year for climate and clean air by more than $1 billion.

But international leaders, Pingree added, were particularly attuned to the climate spending provisions in both the bipartisan infrastructure bill set to be signed into law today and the reconciliation spending package.

“The U.N. secretary said to us, ‘You know, that second bill is really important to what we need to do to advance,’” Pingree said.

Despite their general optimism, Democratic lawmakers acknowledged that they have to earn all the talking they did in Glasgow by passing an effective product over the next few weeks.

“To me, it’s welcome cheerleading because that’s the bar for further action in Congress by Democrats,” Whitehouse said. “But at the same time, it’s not entirely justified cheerleading, and I think that our partner nations understand that painfully clearly.”