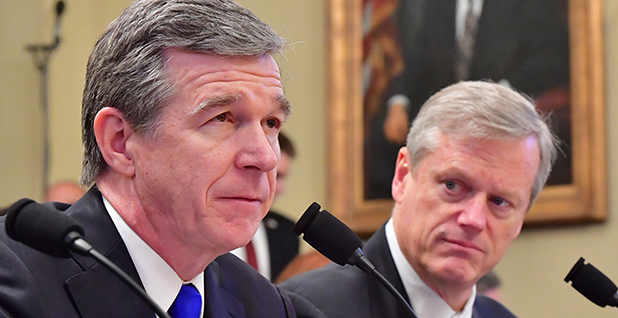 Now firmly in the majority, House Democrats flexed their newfound political muscle yesterday by hosting not one but two hearings on climate change — a double feature that left everyone a little disoriented.

First was the timing of the hearings themselves.

Both meetings began at 10 a.m., an overlap that forced climate politicos to split their time between the Natural Resources Committee and an Energy and Commerce subcommittee.

Then there was the substance.

To the surprise of many — including their supporters — several Republicans on the Energy and Commerce Committee unequivocally acknowledged the scientific consensus on global warming and humanity’s contribution to it.

"Climate change is real. The need to protect the environment is real. The need to foster a strong U.S. economy and grow American jobs is also real," Rep. Greg Walden of Oregon, the top Republican on Energy and Commerce, said in his opening statement. "Republicans on this committee are ready, willing and able to have serious, solutions-oriented discussions about how to address and balance these considerations."

It was enough of a rhetorical shift that activists with Citizens for Responsible Energy Solutions — a clean energy Republican group — were taken aback.

"We all kind of looked at each other like ‘How about that?’" said Heather Reams, the group’s executive director. "I think a lot of members are trying to see, on the Republican side, where this is going."

Reams wasn’t the only one who felt unmoored.

"I would like to observe how reasonable the Republicans sound today on the issue of climate change," said Rep. Jerry McNerney (D-Calif.). "There must have been a conversion on the road to Damascus recently."

Adding to the confusion of the day was a nearly opposite reaction among the Republicans on the Natural Resources Committee.

Others ridiculed the concept of global warming.

Rep. Bruce Westerman (R-Ark.) entered into the record a mocking Dilbert cartoon, and Natural Resources ranking member Rob Bishop (R-Utah) sarcastically thanked Democrats for making February the month for climate hearings: "I appreciate the fact that you picked the shortest month of the year to do that."

Over the course of the day, Democrats were less contradictory in their views, though they, too, appeared to struggle to find a common response to the problem of climate change — other than to emphasize the fact that global warming is bad and needs to be addressed.

Neither hearing yesterday was geared toward a specific legislative goal. There’s no bill on the table, and House Democrats still are debating the ambition of their climate agenda in the face of a GOP-controlled Senate and White House.

Instead the hearings resembled a test-drive in which they could see what it would be like to debate climate policy on their own terms, rather than in response to Republican actions.

They focused on climate impacts already rippling across the country, like extreme weather and disruptions in fisheries. Freshman Rep. Deb Haaland (D-N.M.) pointed to last year’s scrambled conditions in the Southwest.

The Ute Park Fire burned thousands of dry acres near New Mexico’s northern border, and a month later nearby Santa Fe slipped beneath a 1,000-year flood. And that was before a rare hurricane sparked evacuations in Arizona.

"I almost want to apologize to you and the youth of this world who go to bed every night worrying about what will happen to our communities because of climate change," Haaland said, taking off her glasses and choking back tears.

In the weeks leading up to the start of the 116th Congress, Democrats and progressive activists floated a number of responses to climate change — all with varying degrees of effectiveness, political viability and liberal support.

The one that’s gotten the most attention is the "Green New Deal," a climate-friendly jobs program pushed by freshman Democrats such as Rep. Alexandria Ocasio-Cortez of New York.

That idea barely was mentioned by members of the Environment and Climate Change Subcommittee, other than to serve as a new foil for Republicans who had just agreed that global warming was a problem that needed to be addressed.

Rep. Frank Pallone (D-N.J.), who chairs the Energy and Commerce Committee, voiced his support for a strategy that would fold a response to climate change into a broader infrastructure package; a proposal that some on the left have criticized as being insufficient to the scope of the problem.

"I believe very strongly that if we’re going to do something on a bipartisan basis to address climate change, then a major infrastructure bill and putting [climate] provisions in that bill would probably be the thing that we can most easily do — maybe easy is not the word — but that we can most likely do on a bipartisan basis and get President Trump to sign," he said.

During his State of the Union address Tuesday, Trump said he wants to prioritize infrastructure spending, though he never mentioned climate change.

The bipartisan pair offered similar visions based on federalism, markets and a careful eye toward costs. They talked up resilient infrastructure and cheap renewable energy. During their testimony, Baker reached over to slap Cooper on the back: "What he said."

Neither governor reflects his party’s base. Whereas Trump and most Republicans were eager to pull out of the Paris climate agreement, Baker is one of three GOP governors to commit their states to the accord. Cooper praised the Obama administration’s rules on power plants and vehicle fuel efficiency, but he doesn’t want anything to do with the two policies Democrats are exploring: a carbon tax and a "Green New Deal."

Baker also shrugged off a carbon tax, saying Massachusetts is already on the right path with the Regional Greenhouse Gas Initiative, a cap-and-trade regime for the power sector, and he’s looking at a similar system for transportation.

The most important part of climate policy, Baker said, is setting long-term goals that the private sector can plan around. Both Massachusetts and North Carolina have set emissions targets, and the governors asked Congress to set a federal benchmark.

The Obama administration committed under the Paris Agreement to cut emissions 26 to 28 percent below 2005 levels by 2025.

It’s going to take a combination of regulations and incentives to meet those goals, Cooper said. For instance, the state is boosting its renewable portfolio standard for utilities while also tackling energy efficiency in buildings.

The success of those efforts depends on technological advances, especially in renewable energy and battery storage — a key area where the federal government can help, the governors said.

"The United States needs to be a world leader again in this issue," Cooper said. "Anything you can do legislatively, from your bully pulpit, to make that happen is greatly appreciated. It’s absolutely necessary."