Democrats search for plan B as climate program falters 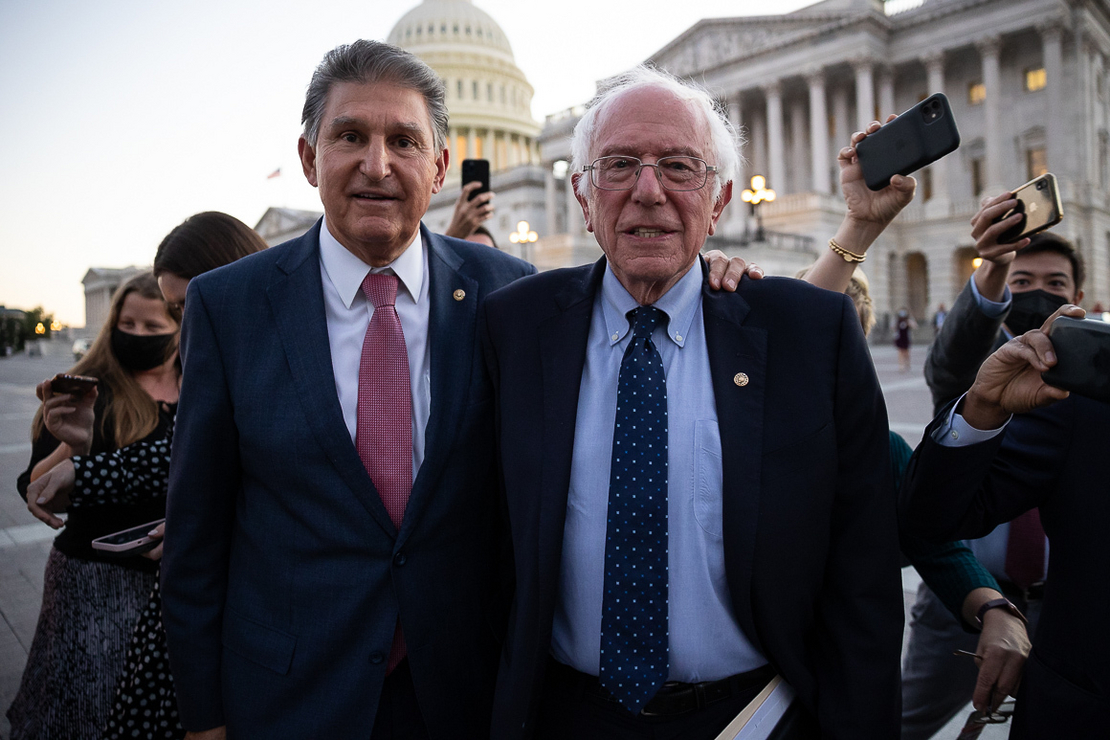 Democrats are preparing for the possibility that the Clean Electricity Performance Program goes down amid hardening opposition from Senate Energy and Natural Resources Chair Joe Manchin.

But the potential demise of the CEPP could bring its own set of political challenges, as negotiations on the reconciliation package kick into high gear ahead of United Nations climate talks at the end of the month.

It means carbon pricing — which has drawn little enthusiasm in the House — could become a more important part of the conversation, and it leaves Democrats scraping for ways to slash power-sector emissions to meet President Biden’s pledge to reduce emissions 50 to 52 percent under 2005 levels by 2030.

“It remains to be seen, but I think it’s worth planning for that,” Sen. Sheldon Whitehouse (D-R.I.) said yesterday when asked if the CEPP is dead. “And that means we’ve got to recalculate the emissions savings pathway, and I think it makes the methane pollution fee and the carbon pollution fee all the more essential.”

The CEPP, which would offer payments for utilities that deploy 4 percent more clean energy each year, is the backbone of the climate proposals Democrats have put on the table in reconciliation talks.

Manchin has for weeks outlined his opposition, and by the time the Senate returned from recess yesterday, it was hanging by a thread, with the West Virginia Democrat digging in and negotiators scrambling for ways to tweak the program to make it more palatable to the coal-state senator (E&E Daily, Oct. 18).

Despite Manchin’s stance, however, Democrats stressed that they don’t even have a top-line number for the multitrillion-dollar package, much less an agreement on which specific policies will make it to the end.

“I don’t know if that is for sure,” Sen. Jon Tester (D-Mont.), a moderate who negotiated with Manchin on the bipartisan infrastructure bill, said of the potential demise of the CEPP.

“I think everything is still very, very much in the air,” Tester said. “We don’t have a top-line number yet, as of yesterday.”

And some are still holding out hope that a modified version of the CEPP, or a similar program targeted at the power sector, will end up in the final bill.

As written by the House Energy and Commerce Committee, the $150 billion CEPP would offer payments to utilities that hit the annual clean energy target and fine those that do not, with a strict emissions benchmark that would stop virtually any fossil fuel from being counted as “clean.”

Alongside a suite of clean energy tax expansions, it would be a critical piece of the bill’s decarbonization puzzle. While Congress could achieve significant emissions benefits without it, the CEPP accounts for more than a third of the reductions in the reconciliation package and bipartisan infrastructure bill, according to modeling from the think tank Energy Innovation.

Manchin has several objections, most prominently that he does not want to pay private companies to transition to clean energy while many are already doing so. While it’s true that many utilities are moving that way — with the nation on track to set a record for solar and wind installations this year — it’s likely not enough on its own to meet Biden’s climate targets or avoid the worst impacts of climate change (Climatewire, Aug. 27).

“There has to be a principled compromise with respect to the [CEPP],” Environment and Public Works Chair Tom Carper (D-Del.) said yesterday. “I’ve asked my staff to put on their thinking caps, and I have as well, to try and think outside of the box to see what could be a fair and appropriate compromise.”

In short, negotiators have been looking for a way to weaken the CEPP, to allow more room for natural gas and coal, a possibility Sen. Brian Schatz (D-Hawaii) acknowledged yesterday.

“Would it be different if there were 70 of me in the Senate?” Schatz told reporters. “Sure, but I don’t think we want to catastrophize this thing quite yet.”

Despite a bleak outlook for the CEPP, Democrats are generally optimistic that they will be able to include robust climate provisions in the reconciliation package.

“There is a wide menu of options for how we can show climate ambition that will make a lasting difference, and as the chairman of the Energy Committee, I think Sen. Manchin is well aware of the menu of options we have in front of us,” Sen. Chris Coons (D-Del.) told reporters yesterday.

For many key senators, namely Finance Chairman Ron Wyden (D-Ore.), the menu includes some kind of economywide price on carbon. Wyden and other supporters, however, have still offered little in the way of specifics, outside of a few leaked documents indicating that they are considering the idea.

Carbon pricing also has at best tepid support on the House side, where Ways and Means Chairman Richard Neal (D-Mass.) left it out of his reconciliation proposal altogether. Even House supporters of other carbon pricing bills have effectively ruled it out as a piece of the reconciliation package (E&E Daily, Sept. 29).

High gas prices could also fuel direct GOP attacks against any attempt to price carbon, leaving moderates in a perilous position. But Wyden has raised the possibility of exempting gasoline from a potential carbon tax, and he again stressed yesterday that it would not run afoul of Biden’s pledge not to enact new taxes on people making under $400,000 a year.

“All those workers and families who have questions about it are going to hear from me and others about making them whole, and while our economy is in transition, they are going to be able to pay their bills,” Wyden said.

It’s not clear Manchin, who has opposed carbon taxes for years, would support that kind of proposal either. Asked about it yesterday, he declined to comment.

Either way, negotiations don’t look likely to wrap up in the coming days. On top of negotiations with Manchin and Sen. Kyrsten Sinema (D-Ariz.) on a wide variety of other social issues, Wyden and Neal remain at odds about the specifics of the clean energy credit overhaul, with Wyden pushing a much broader overhaul of the energy tax system.

Biden is set to meet with several groups of lawmakers at the White House today. Manchin, meanwhile, met yesterday with Budget Chair Bernie Sanders (I-Vt.), the Senate’s leading progressive, after the pair publicly feuded over the reconciliation bill in the past few weeks.

In a striking moment yesterday, Sanders and Manchin ran into each other as reporters chased them outside the Capitol. They stuck a friendly pose for the cameras before getting into separate cars.

“I would hope that we’re going to see some real action within the next week or so,” Sanders told reporters, adding that his meeting with Manchin went “very well.”

Lawmakers will also continue to see a lobbying blitz. Climate hawks got a boost on that front yesterday, with a list of major companies — including Carrier, BP America Inc. and Shell — writing Democratic leaders asking for greenhouse gas emissions policies to remain in the package.

“The climate provisions in the Build Back Better Act support our own investment in low-carbon innovation and will help us grow our business and remain competitive globally while also meeting our climate goals,” they wrote.

Still, Schatz, who plans to attend the U.N. climate conference known as COP 26, acknowledged that reconciliation negotiations could slip beyond the U.N. talks. White House climate adviser Gina McCarthy also said yesterday the Biden administration would not be showing up empty-handed “despite what happens on the Hill” (E&E News PM, Oct. 18).

“I think it’s better if we pass something” before COP, Schatz told reporters. “But second best would be that we’ve agreed to something.”