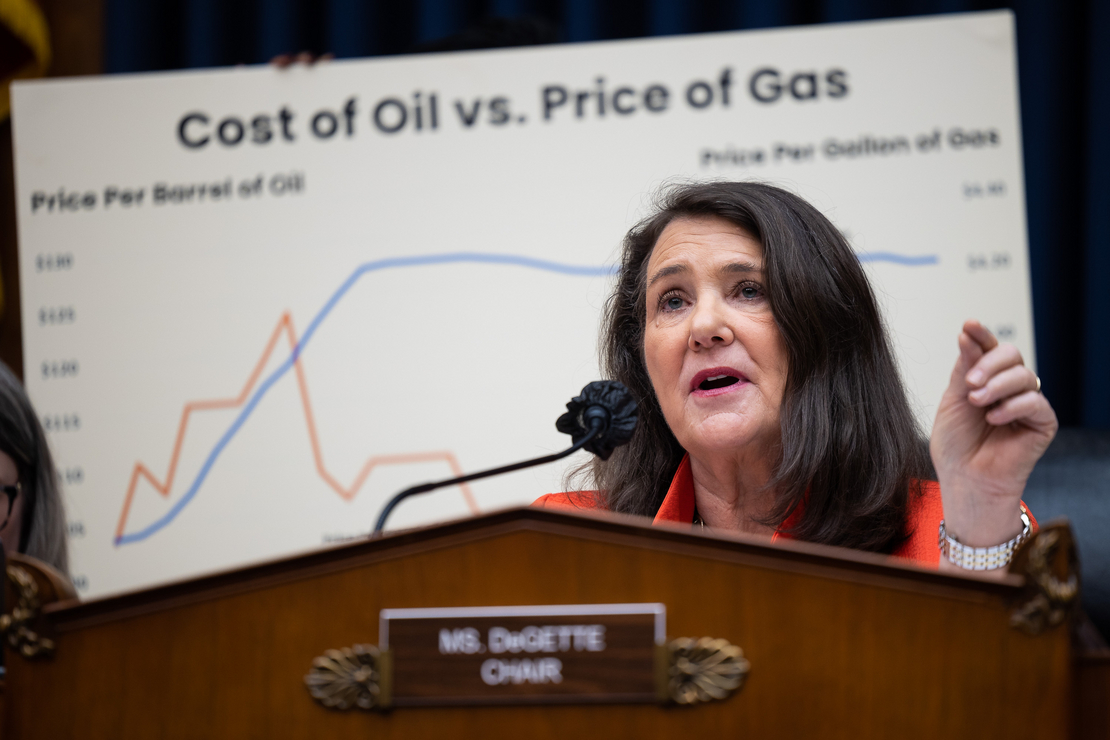 President Joe Biden came into office last year pledging to restrict drilling on public lands and enact an ambitious clean energy agenda, supported by a Democratic Congress and a hungry base of environmental activists.

Now, facing a potentially disastrous midterm season with high gas prices spurred by Russia’s invasion of Ukraine, the Biden administration and Capitol Hill Democrats have done something of a 180: They are pushing major companies for more domestic oil and gas production and pleading with them to lower prices.

That contradiction was on display this week during a hearing on alleged oil profiteering with six industry executives in the House Energy and Commerce Subcommittee on Oversight and Investigations (E&E Daily, April 7). While Democrats did pitch clean energy and climate policy as the long-run solution, they repeatedly asked oil companies to ramp up production in the near term.

“We need a long-term energy policy that moves toward clean energy, that will keep us independent from foreign oil, and that’s what we need to do,” Subcommittee Chair Diana DeGette (D-Colo.) said during the hearing. “But you know something? When my constituents went to get gas in their cars today, they paid $3.95 a gallon. And nationally, they’re paying $4.16 a gallon.”

Such is the current environment for Democrats, whose dreams of a green energy future are crashing against the realities of the fossil fuel present. In recent weeks, as the war of words over energy has intensified, the political urgency of high gas prices has supplanted Democrats’ laser-like focus on greenhouse gas emissions. That new reality worries some climate advocates. Making matters worse, Democrats’ current options are limited.

Experts say there’s little Congress or the president can do to change energy costs in the short term. Crude oil prices are set in a global market. While the United States is the world’s top producer, its production is made up of thousands of companies that individually have little sway over the global price, unlike state-owned giants and cartels in the Middle East and elsewhere.

Generally, Democrats still support climate policy and oppose permitting reform that would make it easier to drill. And they continue to forcefully advocate for the $550 billion in clean energy and electric vehicle provisions of the “Build Back Better Act.”

But it’s also clear that they don’t have a unified idea of how to both take the pressure off consumers at the pump and set the nation on a path to net-zero greenhouse gas emissions by 2050. When asked what, exactly, they want the oil industry to do, Democrats across the ideological spectrum gave different answers.

Some want companies to simply charge less for a barrel of crude oil. Others want them to produce more at home in the short term, while some are less concerned by potential profiteering and more interested in accelerating the clean energy transition.

The result is an energy and climate message that sounds distinctly different from the one they ran on in 2020.

The new tone coming from Democrats has been noticed.

“I think there has been a shift. Obviously, $5 gas will do that,” said National Wildlife Federation President Collin O’Mara. At the same time, O’Mara said he doesn’t think Democrats are being “inconsistent.”

“The question is, can we show that we can do both … meet the near-term price pain and still set ourselves up to reduce emissions?” he added.

Democrats and some environmental groups insist they can. But the E&C hearing this week underscored a sharp rhetorical contrast from what Democrats were saying about energy and climate just a few months ago.

In October, four of the same oil executives — from Exxon Mobil Corp., Chevron Corp., BP America Inc. and Shell — were before the House Oversight and Reform Committee as part of an ongoing investigation into the fossil fuel industry’s role in spreading climate misinformation (E&E Daily, Oct. 29, 2021).

Rep. Ro Khanna (D-Calif.), who is co-leading the probe, noted during that October hearing that BP and Shell have committed to oil production declines over the coming years and grilled Exxon and Chevron for not doing so.

One study has found that oil and gas production needs to go down 3 percent each year from now until 2050 if the world is to prevent temperatures from rising 1.5 degrees Celsius over preindustrial levels, and Khanna pointedly asked the representatives of American oil majors about the scientific urgency (Climatewire, Sept. 9, 2021).

“Are you embarrassed as an American company that your production is going up while your European counterparts are going down?” Khanna asked Chevron CEO Michael Wirth.

The script flipped this week on the Energy and Commerce dais, where full committee Chair Frank Pallone (D-N.J.) accused the companies of “refusing to increase production to provide the American people some much-needed relief.” He later asked each executive whether they would increase production and decrease dividends and stock buybacks.

That’s not to say Democrats aren’t talking about climate change at all. The House Select Committee on the Climate Crisis still holds near-weekly hearings on the topic, and Chair Kathy Castor (D-Fla.) said during one such meeting yesterday that the latest IPCC report and economic conditions highlight the need for additional energy efficiency policies.

But Khanna, who has also called for temporary production boosts in recent weeks, acknowledged the political tightrope Democrats are trying to walk.

“You need to do things short-term that will increase production, long-term invest in renewable energy,” Khanna said in a recent interview. “I get that it’s not ideal, but we’re in a situation that people are really hurting at the pump. And if you want to build a coalition in this country for climate goals, you’re not going to do that by asking people to pay six, seven dollars at the pump.”

‘Throwback to an earlier period’

Even beyond gas prices, some of Democrats’ talking points about the energy transition have taken a different tinge in recent weeks.

Pallone, for example, called at this week’s hearing for a “21st-century all-of-the-above” energy policy — lifting a phrase used by both the Obama White House and Senate Energy and Natural Resources Chair Joe Manchin (D-W.Va.). That phrase has been widely panned in progressive circles because it suggests a continued reliance on fossil fuels.

“The best way to protect Americans from oil price spikes is to curb our dependence on oil and transition to renewable energy, which is more stable, affordable, and generated right here at home,” Pallone said.

The way the hearing played out “really does feel like a throwback to an earlier period,” said Barry Rabe, a University of Michigan political science professor who studies climate and energy politics.

“It felt like ‘Back to the Future’ all over again, where you have legislators who are trying to position themselves at a point where there’s demand for more oil and gas production fast — and lower prices,” Rabe said. “And in this case, things like greenhouse gas emissions seemingly go out the window.”

The price of West Texas Intermediate, the U.S. crude benchmark, was around $97 per barrel yesterday evening, while prices at the pump were averaging $4.15 for a gallon of regular gasoline, according to AAA.

Still, opinions are far from universal, particularly when it comes to production increases.

“The promise has been there for years: ‘Oh, if we just drill more, the price of the pump will change.’ Well, it never has because it’s a global commodity and because half our refining capacity that the oil companies own in the U.S. is actually set up for Saudi Arabia, Russia, Venezuela,” said Sen. Martin Heinrich (D-N.M.), a climate hawk from one of the nation’s top oil- and gas-producing states

“So I’ve been more focused on, how do we implement the technologies that are here and ready to go that fundamentally change the nature of how we power the economy?” Heinrich said.

Sen. Sheldon Whitehouse (D-R.I.), who is the lead sponsor with Khanna on a bill to tax oil company windfall profits, similarly said he has little interest in a production boom.

“I do not, unless it’s part of a coordinated strategy to get additional fuel to Europe to relieve it from Putin petro politics,” Whitehouse said, referring to Russian President Vladimir Putin. “If it’s just a general thing, it’s never worked.”

The debate within the Democratic Party has opened a new line of attack from Republicans, who point out that Democrats spent much of last year trying to restrict oil and gas production.

“They have absolutely backed themselves in a corner on this stuff,” said Rep. Garret Graves (R-La.), who leads the House GOP’s energy and climate messaging. “I think they’re looking to deflect because they know this is a huge political liability that was self-imposed. They own it.”

And the back-and-forth over oil and gas production and prices could hamper efforts to reach a deal on some form of “Build Back Better,” the Democrats’ stalled climate and social spending plan. Manchin, who torpedoed the bill in December, has signaled he is open to negotiations again, but he has for months expressed concerns about how a spending package could affect inflation and energy prices (E&E Daily, March 23).

“There are only so many days left in the legislative calendar before full time electioneering kicks in,” Rabe said. “And there are many, many, many competing items on a legislative agenda, including different chunks of ‘Build Back Better,’ so every day you spend focusing on increasing production and keeping prices down, you’re losing a day.”

On the other hand, the gas price focus could create a new deal space with Manchin, O’Mara said. The West Virginia Democrat has been intently focused on energy prices, “all of the above” production and critical minerals — all major areas of emphasis for other Democrats since Russia’s invasion of Ukraine.

“The security and the energy reality of the moment lends itself to the kind of more comprehensive approach,” O’Mara said.

It’s a balancing act that will play out as prices fluctuate and lawmakers become more focused on the campaign trail in the coming weeks.

“This is a dilemma of short-term challenges and long-term imperatives,” said Rep. Jared Huffman (D-Calif.).