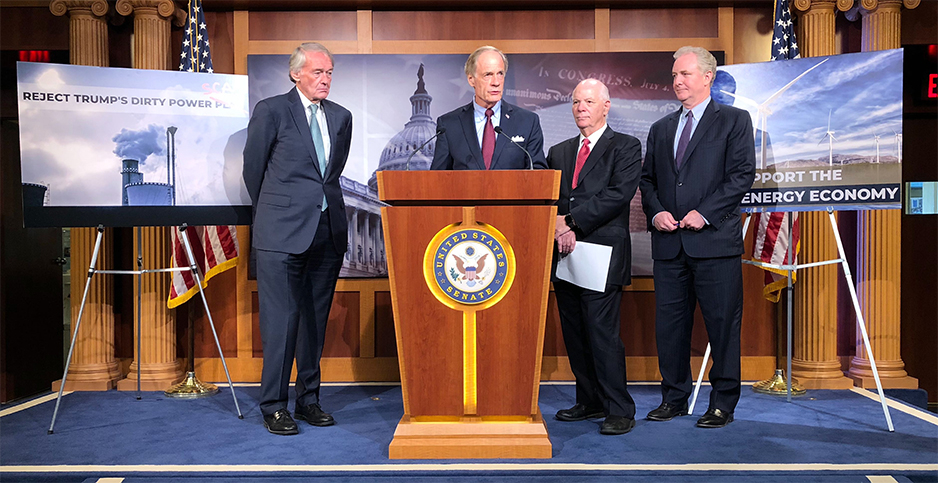 It’s the "dirty power plan," "the disappointing one," a "totally regressive" plan, the greenhouse gas regulation that’s "wrong and should be rejected."

Those are just a few of the phrases congressional Democrats used yesterday to describe the Trump administration’s proposed replacement for the Clean Power Plan, but that doesn’t mean they’ll do anything about it.

While they’re unified rhetorically, Democrats are scattered about how to act on EPA’s Affordable Clean Energy rule, or whether it’s a good idea in the first place to try to stifle the agency through the appropriations process or the Congressional Review Act.

The ACE rule is much less stringent than the Obama-era Clean Power Plan, which was stuck in the courts and never went into effect. Environmental groups have argued it would barely reduce emissions compared with no regulation at all.

"I don’t think there will be any significant change different than what companies are going to do due to peer pressure, customer pressure and economic pressure," Sen. Sheldon Whitehouse (D-R.I.) told E&E News yesterday.

It does not set limits for power plant greenhouse gas emissions, but allows states to pick from a list of technologies to improve power plant efficiency at individual facilities.

The Trump administration is finalizing the rule as Democrats, in the House majority with a newly amplified political voice, trumpet their own climate policies on the road to the 2020 elections.

But Congress has few paths for action, none of which face very good odds in the GOP Senate and all of which would be largely symbolic rebukes of the Trump administration. Instead, Democrats are looking to environmental groups to sue while they cheer them on from Capitol Hill.

"We’ll write a letter complaining and get a lot of people to sign it; we will probably try to get amendments into approps bills saying you can’t spend any money to roll back the rule and a variety of other things that will probably not make any difference in the short run," Rep. Don Beyer (D-Va.) told reporters yesterday.

"It’s hard to imagine what we could do that would pass the Senate and get signed by the president," he added.

Some Democrats floated the House’s oversight power as a possibility, but on the legislative side, there are essentially two ideas when it comes to the ACE rule, both of which Republicans looked to when they were in power.

One would be to knock it down under the CRA, which allows Congress to nix federal regulations within 60 legislative days. Republicans in 2017 used the law to ax more than a dozen Obama-era regulations, drawing the scorn of liberal and environmental groups.

But as several lawmakers acknowledged yesterday, it would have to get through the GOP Senate and President Trump, meaning its primary purpose would be to force House Republicans to vote on the ACE rule.

"This is just basically more inaction. When you block nothing, that doesn’t create something," Whitehouse said. "So we’re in a difficult position where the Congressional Review Act could be a good rebuke to them and it could put Republicans in a tough position to have to vote for this nonsense rule. But ultimately, it doesn’t advance the cause of protecting our climate and our oceans."

Another option would be to inject a rider to block funding for the rule into the Interior-EPA spending bill. Republicans have long tried to attach language to that bill to block the Clean Power Plan and EPA’s endangerment finding, including in amendments expected to be debated on the floor this week.

It would face the same issue as the CRA in the Senate, however. And although several Democrats brought it up yesterday, none proposed a funding prohibition for the ACE rule, with the Interior-EPA bill on the floor this week.

‘The timing is unfortunate’

Natural Resources Chairman Raúl Grijalva (D-Ariz.), for instance, said members of his committee were already discussing the idea, adding that "there has to be a response."

The Rules Committee has already decided which amendments are in order for debate on the bill this week, though Interior-Environment Appropriations Subcommittee Chairwoman Betty McCollum (D-Minn.) suggested she was interested in a legislative response, too.

"This is absolutely inexcusable. The science is on the American public’s health’s side," she said. "So I look forward to working with [Energy and Commerce] when they come up with some language, that the money follows the language so that we can protect the public’s health."

As a response to the Trump administration’s actions, Democrats also pointed to other climate priorities, including boosted spending at EPA and Department of Energy research offices, and a provision that bars funds for President Trump’s withdrawal from the Paris climate agreement.

"The timing is unfortunate. That amendment in all likelihood would have made it," said Select Committee on the Climate Crisis Chairwoman Kathy Castor (D-Fla.) said of a potential funding prohibition. "But there may be a way, because appropriations are never really done."

Part of the reason for the relatively indifferent congressional response may be that lawmakers aren’t expecting the ACE rule to do much.

Several Democrats, for instance, said they don’t anticipate power plant owners to change their behavior, compared with business as usual or if the Clean Power Plan was still stayed in the courts, especially since the regulation could change again if the White House flips next year.

"The other piece is, all these power companies, their planning is on a five- and 10-year basis," Beyer said. "So are they going to pivot right now because of this one change, when it could change again in 18 months? Probably not."

That all leaves Congress — including Republicans, who are doing their own cheerleading for the administration — watching for potential lawsuits from environmental groups.

Most Republicans argued that the ACE rule has better legal standing and that it gets away from what they refer to as the top-down mandates of the Clean Power Plan.

"The Trump administration’s rule follows the law and lowers emissions," Senate Environment and Public Works Chairman John Barrasso (R-Wyo.) said in a statement. "The so-called ‘Clean Power Plan’ would have mandated the shutdown of power plants and increased energy costs for families in Wyoming and across the country."

Even the hard-line conservatives who still want to rip up the endangerment finding — EPA’s determination that greenhouse gases pose public health risks, which underpins the ACE rule and Clean Power Plan — are on board.

"While CEI would prefer no replacement rule, this is a good alternative that will ensure consumers have options when it comes to affordable energy," Myron Ebell, director of the Competitive Enterprise Institute’s Center for Energy and Environment, said in a statement.

At the same time, Republicans are still watching the legal process on the ACE rule closely, said Sen. Kevin Cramer (R-N.D.), who added that "people want us to deal with greenhouse gas emissions."

The issue, Cramer said, is that with environmentalists likely to sue to block the rule, the uncertainty "forces companies to gravitate to the safest place."

"In many cases, the safest place is a very expensive place," Cramer told E&E News yesterday. "And so by the time this works itself out, even if it’s favorable for, say, fossil fuels or clean coal technologies, and favorable for federalism and state’s rights, investors have to protect against the worst-case scenario, and so it has its impacts anyway."