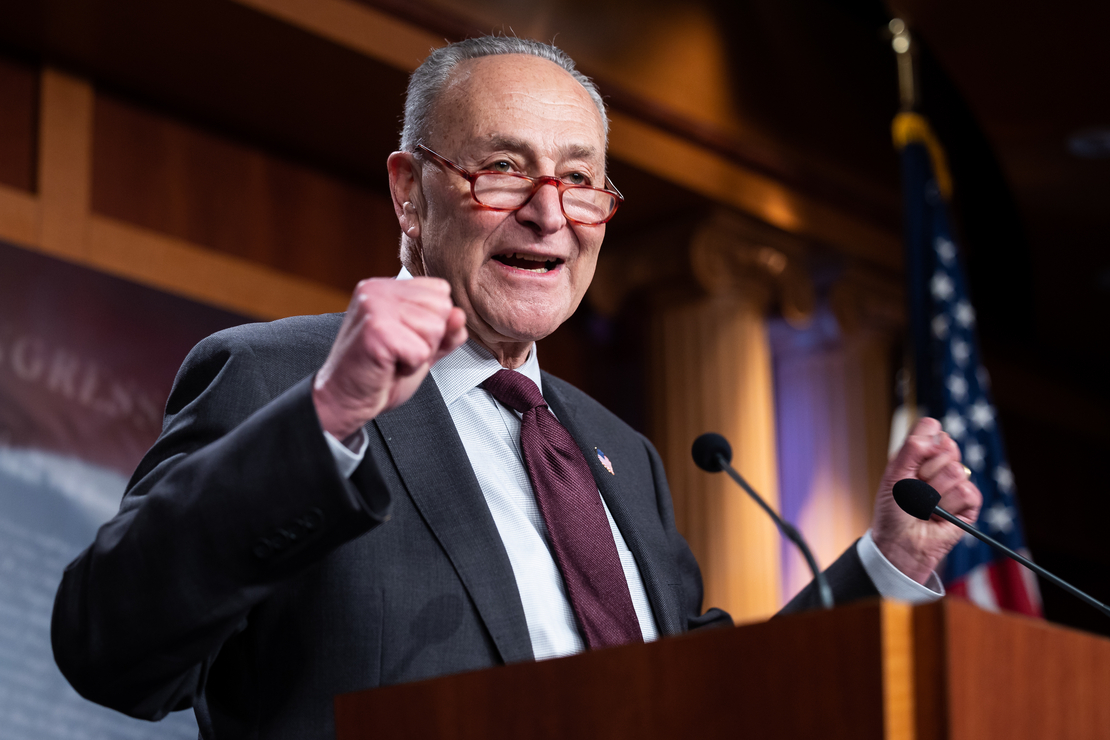 The 117th Congress was hugely consequential for energy and climate policy.

Final passage of the fiscal 2023 federal spending bill Friday will cap off a two-year run that could bring a sea change for the energy sector and put the United States close to meeting President Joe Biden’s climate change goals.

It will drive much of what happens to the nation’s power mix in the coming years. It will also shape future debates on the campaign trail and on Capitol Hill about the energy transition.

Senate Majority Leader Chuck Schumer (D-N.Y.) said it was “one of the most productive Congresses that we’ve had in a very long time.”

The Inflation Reduction Act, passed along party lines after a year of debate, is the biggest single investment in climate policy Congress has ever made. It sends an enormous suite of subsidies to wind, solar, nuclear, carbon capture and electric vehicle technologies over the next decade.

Lawmakers were also able to pass significant bipartisan bills, from the infrastructure law to the CHIPS and Science Act, which aims to boost federal research and semiconductor manufacturing.

Democrats have been trying to pass major climate change legislation for years, and the 117th Congress offered them a capstone to more than a decade of failure.

“We stopped completely sucking,” said Sen. Sheldon Whitehouse (D-R.I.). “But there’s still a lot of work to do.”

Republicans are ready to reverse course when they take over the House in January. They’re already planning a flurry of investigations into the Biden administration and climate-friendly practices in the private sector, as well as policy proposals aimed at boosting the U.S. fossil fuel industry.

Most of the GOP opposed the roughly $2 trillion in spending set out by the Inflation Reduction Act and the bipartisan infrastructure law, known as the Infrastructure Investment and Jobs Act.

Rep. Garret Graves (R-La.) said the private sector will inevitably respond to all that money. But he noted that global coal consumption set an all-time record in 2022 and that global greenhouse gas emissions rose this year as energy markets responded to the crisis in Ukraine.

The Democratic sales pitch on the Inflation Reduction Act, Graves said, is “a total snow job.”

‘Snowball rolling down a hill’

The 50-50 Senate was in some ways a thorn in the side for the Democratic majority, empowering moderates in their caucus — namely Sens. Joe Manchin (D-W.Va.) and Kyrsten Sinema (I-Ariz.) — to dictate much of the agenda.

That was especially true during debate on the bill that eventually became the Inflation Reduction Act. Manchin withdrew his support twice before ultimately agreeing with Schumer to a package that amounted to less than half the $3 trillion in spending Biden and congressional progressives had initially pushed for.

Moderate lawmakers also shaped the infrastructure law, which passed the Senate with 19 GOP votes, despite tepid support from House Republicans when it finally passed in the fall of 2021. The law includes tens of billions of dollars for EV charging, the grid and replacement of lead drinking water pipes.

CHIPS, another bill that garnered significant bipartisan support when it passed this summer, included huge authorization increases for Department of Energy research programs and the National Science Foundation.

Toward the end of the year, lawmakers were able to pass the Water Resources Development Act as part of the annual defense authorization bill. That law authorizes a host of coastal water projects and expands the mission of the Army Corps of Engineers to focus on climate adaptation.

Senate Environment and Public Works Chair Tom Carper (D-Del.) said that the achievements of the 117th Congress were “almost like a snowball rolling down a hill, picking up speed, picking up mass.” He added, “By the time it got to the bottom of the hill, it was huge, what we’ve accomplished, and a lot of it was bipartisan.”

Congress over the past two years was able to pass its annual spending bills with relatively little drama, despite some last-minute quibbling this week, and without a government shutdown.

Federal agencies saw big spending boosts. EPA will get $10 billion from the omnibus, a $576 million increase from fiscal 2022 levels. The Interior Department will get a similar increase, to $14.7 billion, while DOE will see its budget rise nearly $2 billion to $54.7 billion (E&E Daily, Dec. 20).

Democrats revived earmarks, as well, a practice that will continue next year. The fiscal 2023 omnibus saw more than 1,000 directed spending projects across EPA and other environmental agencies, typically for local water projects and other parochial priorities (E&E Daily, Dec. 21).

Outlook for the 118th

Democrats will continue to control the Senate next year, with a slightly bigger margin.

Schumer said he’s hoping the bipartisan dynamic that got the omnibus across the finish line this week will continue, even with a House Republican Conference that will be demanding spending cuts.

“There was a desire on the Republican side — despite the pressure from the MAGAs and what the House Republicans said — to get [the omnibus] done, and I think you’re going to see the same pressures continue,” Schumer said.

The top item on the bipartisan agenda will likely be permitting reform after Manchin was unable to secure the votes for his overhaul of federal environmental rules for energy projects (E&E Daily, Dec. 16).

It could be a difficult political balance to strike, with Democrats hoping to speed deployment of clean energy and transmission infrastructure and Republicans looking for broader changes to bedrock environmental laws.

Democrats also have a laundry list of climate-related priorities they weren’t able to enact during the current Congress.

Among them is international climate aid. Biden has pledged to send more than $11 billion abroad to speed the energy transition and deal with climate damages, but Democrats were never able to deliver while they controlled both chambers of Congress (E&E Daily, Dec. 21). And this year’s omnibus did not fully fund the science research spending authorizations spelled out in CHIPS.

Graves, however, was clear on how the House GOP will treat the massive spending that Democrats and Senate Republicans supported over the past two years.

“Republicans will not continue overly subsidizing markets,” he said.