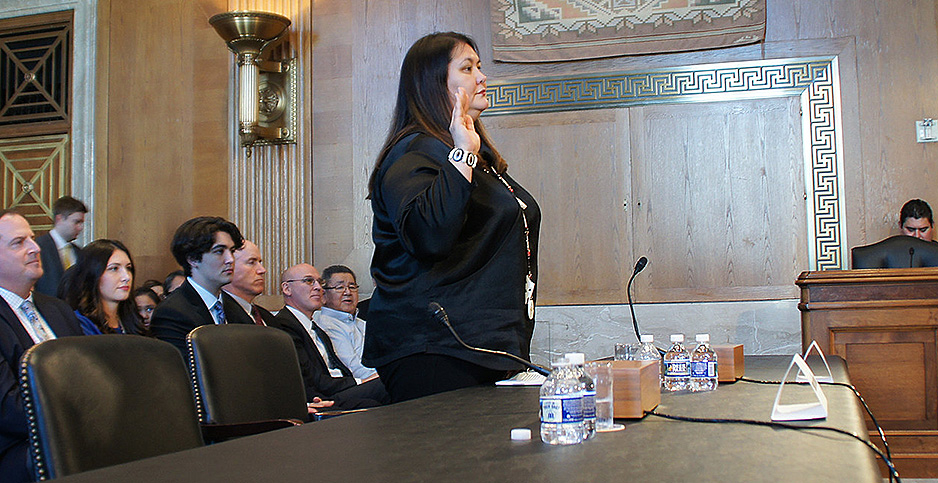 Their request is part of a growing dispute over $8 billion Congress approved for tribes in the last major coronavirus pandemic stimulus bill. The issue is dividing lawmakers and has reached the courts.

The House members, who all sit on the House Natural Resources Committee, contend that Sweeney "recommended a dubious interpretation" of the relief bill language that would make Alaska Native corporations (ANCs) eligible for some of the money. ANCs are for-profit companies.

Citing news accounts, the six Democrats stated that "to guide the disbursement of these funds, the Department of the Treasury consulted with" Sweeney.

Sweeney previously served as a vice president for the Arctic Slope Regional Corp., the largest ANC in terms of revenue. She remains a shareholder, the lawmakers noted in the two-page letter to Inspector General Mark Lee Greenblatt.

"Her active financial interest in Arctic Slope raises questions about whether her involvement in determining ANCs would be eligible for … funding specifically intended for federally recognized tribal governments violated ethics rules and/or pledges," the Democrats wrote.

The letter sent to Greenblatt on Friday was signed by Natural Resources Chairman Raúl Grijalva (D-Ariz.) and all five of the panel’s subcommittee chairs.

Greenblatt spokeswoman Nancy DiPaolo said the IG’s office was coordinating with the Treasury inspector general and "reviewing the information provided by the committee."

Natural Resources Democrats have also been pressuring the administration into releasing funds for the tribes.

House Speaker Nancy Pelosi (D-Calif.) weighed in on the dispute last week. "It’s just ridiculous that they would be getting in line to get funds for this," she said of the Alaska Native corporations.

Several tribal nations filed a federal complaint last week in U.S. District Court for the District of Columbia, including the Cherokee, over Treasury delays in releasing the money.

Tribes also sued the government last month over the prospect of money going to ANCs. U.S. District Judge Amit Mehta blocked that from happening pending litigation, but the administration says it’s still deciding how to dole out the cash.

Sweeney was Arctic Slope Regional’s executive vice president of external affairs, handling government affairs and communications for the $2.6 billion corporation, which is based in Barrow, Alaska. It is owned by nearly 13,000 native Iñupiat shareholders and, according to the most recent records, employs about 12,000 people (E&E Daily, March 1, 2018).

Arctic Slope Regional is one of the 200-plus ANCs created by Congress that are autonomous from the federally recognized tribal governments in Alaska.

Interior, in turn, cites a statutory definition of Indian tribe as "any Indian tribe, band, nation, or other organized group or community, including any Alaska Native village or regional or village corporation as defined in or established pursuant to the Alaska Native Claims Settlement Act."

Sweeney was paid more than $1 million for 2017 and part of 2018, as well as additional incentive payments, according to her financial disclosure statement.

"My expertise is in business, government relations and policy development that facilitates good business practices," Sweeney told senators in 2018. "However, business is but one facet of the well-being of Native peoples."

In a March 2018 ethics agreement, Sweeney pledged that for a period of two years, she "will not participate personally and substantially in any particular matter involving specific parties in which I know the Arctic Slope Regional Corporation is a party or represents a party, unless I first receive a written waiver."

The Senate confirmed the Cornell University graduate in June 2018.

The Interior Department noted that Sweeney is a member of a Native corporation by birthright and has worked to assist all tribes during the pandemic. A statement said career ethics officials authorized her to participate in Coronavirus Aid, Relief and Economic Security Act matters.

"Assistant Secretary Sweeney is committed to supporting all American Indians and Alaska Natives, and any suggestion that she is attempting to divert funds away from American Indians is outrageous and completely false," the department said.

"Her approach has always been focused on inclusiveness, transparency and partnership, and it is unfortunate that some are seeking to sow division during a time of crisis."

All three members of Alaska’s congressional delegation wrote an op-ed last month in the Anchorage Daily News suggesting people were confused about the status of Alaska Natives and, therefore, making "baseless personal attacks."

"To the extent ANCs make expenditures to respond to the public health emergency, it is only fair they be able to access relief funds," wrote the Republicans.