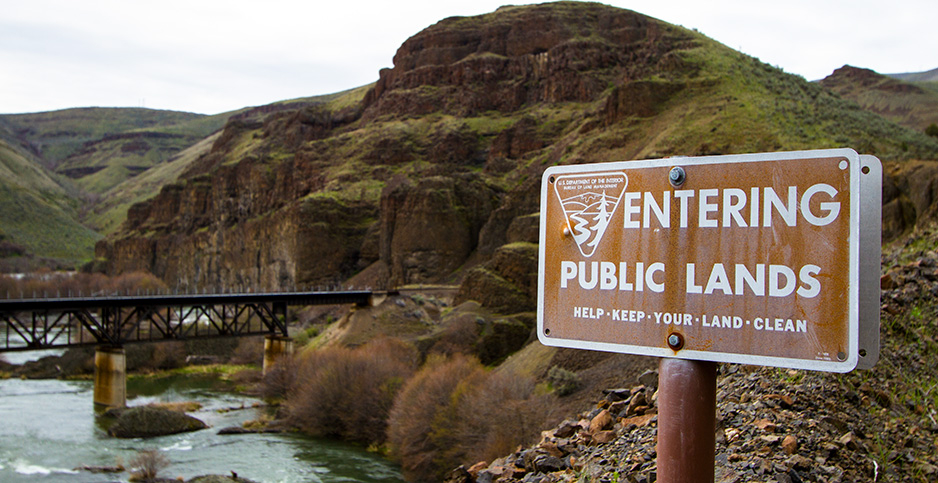 A Bureau of Land Management sign in Oregon. Greg Shine/BLM/Flickr

Interior Secretary David Bernhardt can expect lots of questions and pushback from congressional Democrats regarding his plan to relocate hundreds of senior positions within the Bureau of Land Management from its Washington, D.C., headquarters to various Western states, several members of both parties said yesterday on Capitol Hill.

"Well, we’re going to do everything we can to stop this effort," said Sen. Chris Van Hollen (D-Md.), an appropriator who has a large federal employee constituency. "We obviously have the upcoming appropriations bills, and those will be an opportunity to try to stop this from happening."

On the other side of the Capitol, Rep. Jared Huffman (D-Calif.), a member of the House Natural Resources Committee, agreed that he anticipated Democrats will try to block the move by barring funding for it in the annual Interior-EPA appropriations bill, which includes BLM.

Van Hollen and Huffman are among those who believe the BLM reorganization is just an attempt by the administration to hollow out the agency, ridding it of senior scientists and resource specialists who don’t want to relocate.

"It’s a way for them to get rid of a lot of professional staff here in Washington," Huffman said, adding it was a "superficial" appeal to Westerners.

The proposal, outlined yesterday in a letter that Assistant Secretary for Land and Minerals Management Joe Balash sent to appropriators, would shift nearly 300 positions, some vacant but many of them occupied, to offices in several Western states from Alaska to Wyoming (E&E News PM, July 16).

Twenty-seven other positions are slated for a new BLM headquarters located in Grand Junction, Colo.

The administration’s idea is to put more senior jobs where it makes sense in regions closer to the public lands that the agency manages. Interior officials also want to save money on personnel, travel expenses and building leases, all of which cost more in D.C.

Of the 550 positions the department studied, 61 will stay in the Washington area, including jobs related to budget, legislative affairs and regulatory issues. "We do need to keep a core set of functions here in the nation’s capital," Balash said during a call with reporters yesterday outlining the realignment.

The assistant secretary said appropriators and other members "have a lot of questions, [and] we will be working with them through that process."

But Republicans on Capitol Hill who support the move agreed Democrats will fight it.

"It’s good as far as I am concerned, but I do expect some pushback," said Sen. Kevin Cramer (R-N.D.), who called the idea "fantastic" because it would decentralize the agency.

Rep. Mark Amodei (R-Nev.), a senior appropriator who has long criticized BLM for not having more personnel in the West, said he favors moving the agency closer to its users.

He added, however, he wanted to hear about the rationale, costs and logistics for the relocation before formally endorsing it.

Amodei said he expects Democratic appropriators, as well as those on the Natural Resources Committee, to resist the move.

Top Democrats with oversight over Interior’s purse strings also expressed strong reservations about the department’s proposal — officially unveiled yesterday afternoon after days of leaks — and promised to keep demanding more details. They expressed consternation that the decision to move was done without talking to members of Congress first.

"This decision was not made with advance consultation with Congress and the scrutiny and forethought deserving of any action impacting our public lands," Minnesota Democratic Rep. Betty McCollum, who leads the House Interior and Environment Appropriations Subcommittee, said yesterday.

"After my discussion with Secretary Bernhardt this morning, serious questions remain: What are the benefits to the Interior Department and to the American public? What problem will this move solve? Why is BLM singled out for this move? How much will the move cost?"

"Congress needs much more information from the Interior Department about this proposal to evaluate whether it is legal or advisable, as well as how much taxpayer money it would cost," the Democrat said.

Udall said he supported "putting more land management staff and resources on the ground in Western states" but added that "BLM leadership must be accessible and accountable to all affected states and to Congress, which sits in Washington."

House Natural Resources Chairman Raúl Grijalva (D-Ariz.), who leads the authorizing committee over Interior, pledged to communicate with appropriators "that there has to be some tight restrictions about not moving money into that account and not necessarily giving them the money they want."

But it’s not clear how easy it will be to prevent the relocation, which will start in the next 15 months.

Congress gave the department $14 million for its proposed reorganization in fiscal 2019; of that amount, $5.6 million is slated for the BLM realignment.

The plan to shift more senior personnel and resources out West to where public lands are located was always part of the overall proposed restructuring.

"They know that the administration has been studying that," said Rep. Mike Simpson (R-Idaho), a senior appropriator, referring to his Democratic colleagues on the committee. Simpson said the idea makes sense to him but that he needed to look at it more. "It’s the Bureau of Land Management, and all the BLM land is in the West."

Sen. Lisa Murkowski, who leads the Interior authorizing and appropriating committees, said she believes the department has the authority it needs to implement the relocation out West. "I think they’re good," she said.

But the Alaska Republican also didn’t commit to giving it more money. "Well, I think that that’s, again, something that we need to discuss with the secretary and his folks about how this implementation works," she said.

The administration requested $28 million for Interior’s reorganization in fiscal 2020; the House bill does not include any funds for the initiative.

"I would think they would certainly need appropriations for it, and so I intend to look very closely at any proposals that come forward on this to make sure that they actually make sense, not just for one individual state but for the BLM as a whole and for America’s public lands," said Sen. Martin Heinrich (D-N.M.), a member of the Energy and Natural Resources Committee.

Murkowski said she spoke to Bernhardt earlier this week "about how they are going to be moving forward" with the BLM reorganization.

"It’s going to roll out over a longer period of time, which, again, gives folks the opportunity to look and see how this works for them," she said.

"You can’t just make an announcement on a Monday, and people are like, scrambling, ‘Oh, my gosh, I’ve got to sell my house, because I have to report to work on the first of August.’ You don’t do that to people," Murkowski said, adding, "And the secretary knows that. It’s not his intention to do that."