Democrats: ‘We will turn this report into law’ 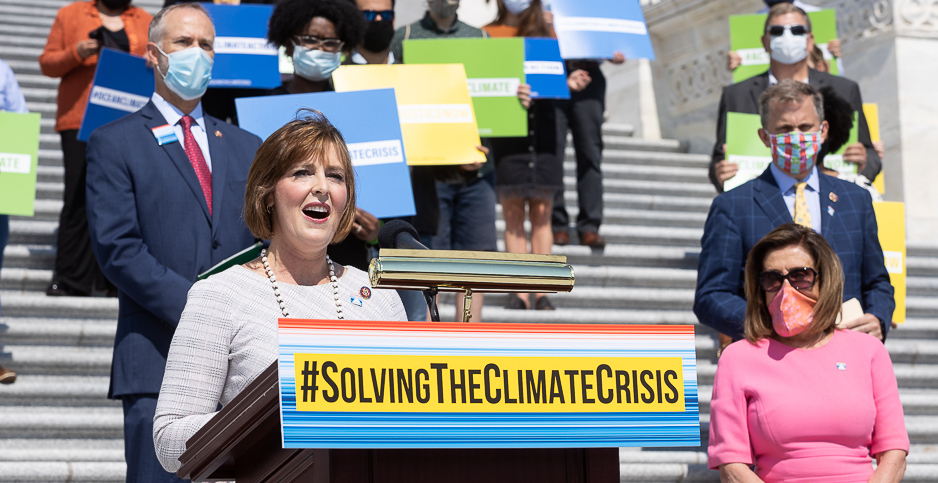 House Democrats pledged to turn a wide-ranging vision for U.S. climate policy into law this morning at a sweltering-hot news conference on the steps of the Capitol, drawing effusive praise from most major environmental groups.

Chairwoman Kathy Castor (D-Fla.) sold the report as a "transformative road map" for climate policy. "We chart the course to good-paying American jobs in solar and wind energy, in manufacturing American-made clean energy and clean electric vehicles," she said.

Despite their celebration, most of the report’s recommendations are unlikely to become law anytime soon, and it may not even solve the divisions about certain aspects of climate policy — namely nuclear power and ending fossil fuel development — pulsing through the Democratic Party.

But it’s significant in that it reflects the views of Pelosi and other House leaders and offers a vision for what a Democratic Congress would do under a President Biden, should Democrats sweep the elections in November.

It’s also a more inclusive view of environmental policy than Democrats and major green groups have espoused in the past, with a hefty emphasis on environmental justice amid ongoing protests around the country.

Pelosi pledged to turn the recommendations into law with help from her environmental backers. "With your leadership, all of you, we will turn this report into law, into saving the climate," Pelosi said this morning. "Democrats know that the climate crisis is the essential crisis of our time."

Environmental groups, many of which were involved in drafting the report, offered their own thanks to Pelosi and praise for Castor.

"The report offers a strong foundation for climate action," Ken Kimmell, president at the Union of Concerned Scientists, said in a statement. "It’s now incumbent upon Congress and the president to answer the call of the broad-based, powerful climate justice movement and transform the hundreds of policy recommendations into actionable rules and laws."

The report offers a range of policy recommendations across the economy, including a clean energy standard for the power sector, a price on carbon, and investments in infrastructure and public lands.

It would also end tax breaks for oil and gas extraction, extend credits for solar and encourage natural carbon sequestration through the agriculture sector.

The report includes several new proposed programs that have been well-trod in environmental circles in recent years. They include a National Climate Bank and a reestablished Civilian Conservation Corps to build climate resilience projects.

Environmental justice is a major focus throughout, but the report also recommends Congress enact the "Environmental Justice for All Act," the sweeping EJ bill written over the past year by Reps. Raúl Grijalva (D-Ariz.) and Donald McEachin (D-Va.), with input from communities around the country.

All together, the report recommends more than 100 bills that have already been introduced, on top of its more abstract ideas about carbon pricing policy.

"None of these policies individually are silver bullets," Rep. Sean Casten (D-Ill.) said at the news conference. "Together they represent a serious — and more importantly, necessary — approach to reducing our emissions."

The green celebration was not universal, and the report certainly will spark debate on the left end of the environmental spectrum.

For one thing, the clean energy standard it recommends, which would aim to hit net zero emissions from the power sector by 2040, leaves the door open for nuclear and fossil fuel energy with carbon capture, both taboo subjects among progressive environmentalists.

The report also would not immediately ban fossil fuel extraction on public lands. Instead, it would phase down emissions from public lands and waters by 2040, while leaving much of the planning up to Interior and other management agencies.

"These recommendations don’t include many of the bold and immediate actions needed to avert a climate catastrophe," Brett Hartl, government affairs director at the Center for Biological Diversity, said in a statement.

"The report has hundreds of positive suggestions, but it’s far too vague on some of the most urgent climate policy issues. We need specific plans for rapidly phasing out oil and gas drilling, slashing carbon emissions by 50 percent by 2030 as scientists recommend, and other crucial steps."

Meanwhile, the panel’s Republicans are already complaining they were left out of the process. Because the select committee never held a vote on the document, it’s a majority staff report, representing only Democratic views.

"It is disappointing that the full committee process did not occur as originally planned, including an amendment process where all committee members could vote on recommendations to report to Congress," select committee Republicans said in a joint statement.

But the "new reality" of COVID-19 — including soaring unemployment — cannot be ignored, they said.

"Bipartisan recommendations to increase the resilience of our communities and address global emissions — while strengthening the American economy and getting families back to work — are worth pursuing," Republicans said. "We expect this effort to continue in the committee."

Still, that rosy talk does not reflect the reality on Capitol Hill right now, and the parties remain divided on the fundamentals of climate policy.

While it may not be as aggressive as some progressives would like, the select committee report would ultimately aim to reduce the use of fossil fuels, particularly for transportation, where it recommends that all new vehicles have zero emissions by 2035.

Republicans on the committee have spent much of the last year of hearings pitching the benefits of oil and natural gas as climate solutions, pointing to emissions reductions as the power sector has switched from coal to gas and renewables.

"Economic growth and energy security do not have to be sacrificed in order to improve the environment," Republicans said in this morning’s joint statement. "In fact, increased production of American shale natural gas helped produce the greatest emissions reduction in history."

"There are a number of bipartisan solutions that help make the clean energy transition cheaper and faster while preserving economic growth and reflecting the global nature of the challenge," Powell said in a statement. "But, this report includes a host of contentious recommendations unrelated to climate change seemingly designed to push the parties further from a bipartisan solution."

Still, House Democrats are poised this week to pass many of the report’s ideas as part of the "Moving Forward Act," H.R. 2, their $1.5 trillion behemoth infrastructure bill (E&E Daily, June 30).

That bill, said Natural Resources Defense Council President Gina McCarthy, will be a "down payment" on the select committee report.

And despite Republican complaints, both the report and the infrastructure bill are to some extent a messaging exercise that offers visions for potential Democratic governance in 2021.

"All of this work did not happen by accident," Rep. Joe Neguse (D-Colo.), a member of the select committee, said this morning at the news conference.

"It happened because the speaker decided as one of her first actions of the 116th Congress to impanel the Select Committee on the Climate Crisis."