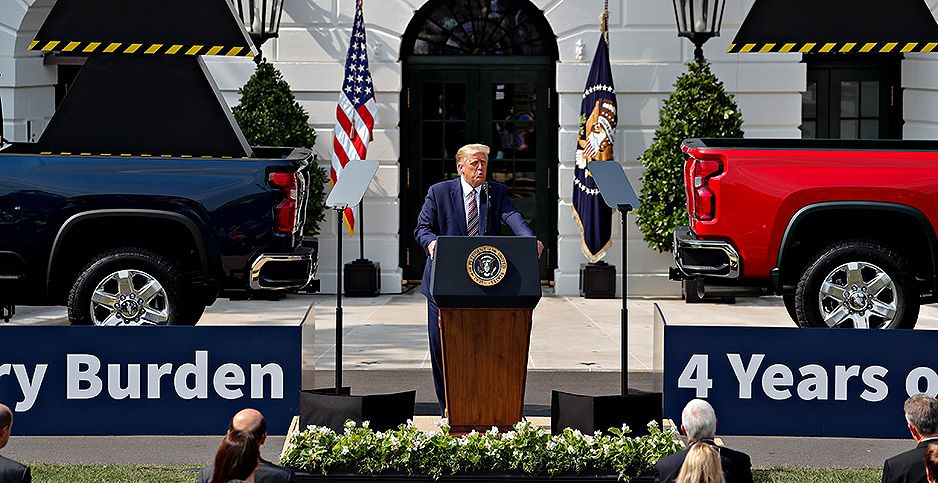 For two days in a row, President Trump touted his regulatory rollbacks at campaign-flavored events.

Her comments came as Democrats prepare for the possible end of the president’s time in office and ponder their own plans for erasing his legacy.

"I yearn for other Republican presidents," Pelosi told reporters yesterday. "While we may have disagreed on many points, at least we had a shared commitment to the governance of our country."

She specifically pointed to Trump’s weakening of the methane and mercury rules as well as his latest regulatory action on the National Environmental Policy Act (E&E News PM, July 15). President Nixon, a Republican, signed NEPA into law 50 years ago, she said.

A House Democratic aide said on background that all options were on the table for responding to Trump’s NEPA rule rewrite.

At the White House, without offering specifics, Trump yesterday boasted about repealing the Obama-era Clean Water Rule and easing efficiency standards on many household appliances such as showerheads, old-style lightbulbs and dishwashers.

"My hair — I don’t know about yours — has to be perfect," he said, adding that his rules saved money for the average consumer.

"Before I came into office, American workers were smothered with an avalanche of wasteful and expensive and intrusive federal regulation," he continued.

To illustrate his argument, he parked two new American-made pickup trucks on the White House South Lawn. In front of a pointedly blue truck, with oversized weights sitting in the bed, a sign read, "Four years of Regulatory Burdens."

A second truck — which was red — had the same weights being lifted by a crane with a sign that read, "Four years of Regulatory Freedom." His point: His administration was the crane lifting the heavy weight of regulation.

Democratic lawmakers — who are increasingly optimistic about the November elections — are privately talking about their strategies for undoing Trump’s environmental and public health rollbacks.

In one scenario, Democrats retake the Senate and win the White House, allowing them to quickly repeal Trump regulations finalized within 60 legislative days, under the Congressional Review Act.

"We’re going to reverse Trump’s rollbacks of 100 public health and environmental rules and then forge a path to greater ambition," Biden said.

The pandemic has upended the congressional calendar, and several regulatory scholars have expressed confusion about exactly when the CRA deadline occurs.

"Don’t know if that is still true," he wrote via email. "Of course there has never been an election year during a pandemic and global economic crisis. So … who knows?"

Pelosi did not mention the CRA, which Republicans used to revoke 16 Obama rules at the beginning of the Trump term, but she did not mince words in expressing her disapproval of Trump’s deregulatory streak.

She said it reflects a continuing pattern with his administration doing "bad things" to the environment.

Should they win in November, Democrats may indeed want to overturn major Trump rules. But there are risks involved, noted James Goodwin, an attorney at the Center for Progressive Reform.

For one, repealing the rules would prevent Democrats from implementing their own "substantially the same" regulation, also known as the "salt the earth" provision.

He explained that if Democrats are worried that a future administration might be prevented from issuing a tougher rule, then that Trump regulation would not be a good candidate.

In effect, the Congressional Review Act is meant to ax regulations rather than implement stronger ones.

"If you’re the Biden administration and you think you have a good chance of issuing a stronger replacement for a Trump rule, then maybe that Trump rule isn’t a good candidate for the CRA," Goodwin said.

Many progressives are largely opposed to using the law, a tool for those who want to outright eliminate regulations. They often refer to it as a "blunt instrument" that does not allow for thoughtful rulemaking with public participation.

"There is a process to administrative rulemaking, but it is an important process, so if you have good leadership in the White House, then going that route is the best way forward," said Matthew Davis, legislative director at the League of Conservation Voters.

Andrew Rosenberg, a director at the Union of Concerned Scientists, generally called it "just a bad way to make policy." He said on NEPA that he’s heard talk of calling for use of the law but "nothing more than that."