Democrats weigh whether to go it alone on climate 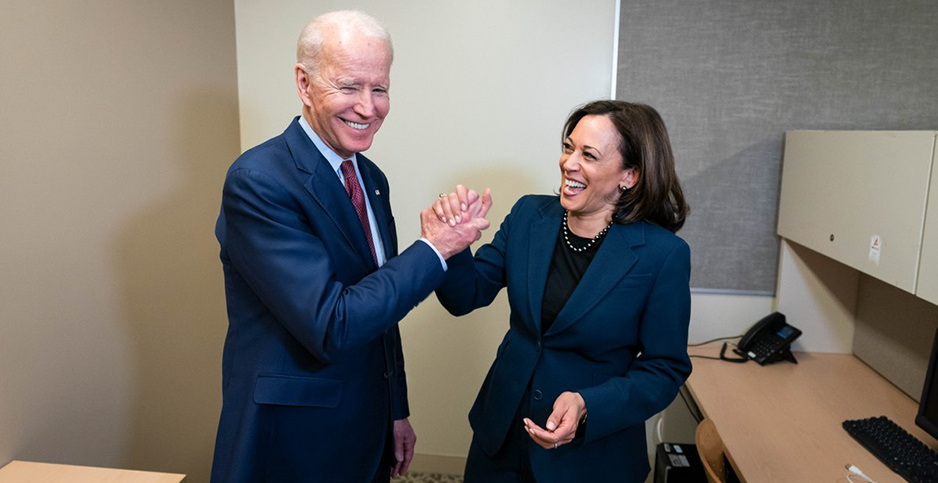 Democratic presidential nominee Joe Biden clasps hands with running mate Sen. Kamala Harris (D-Calif.). Democrats are divided on how much to work with Republicans and the private sector on climate. @JoeBiden/Twitter

Democrats of all stripes rallied this week around the party’s ambitious pledge to address climate change, with support coming from party insiders, socialist activists and corporate executives.

The exception was an uproar over the party platform. After the Democratic National Committee scrubbed platform language opposing fossil fuel subsidies, presidential nominee Joe Biden’s campaign reiterated that he would end them — spotlighting the unity between the party’s grassroots and the top of the ticket.

But beneath the rough consensus over what to do, the Democratic National Convention has revealed intraparty tension over how to do it.

Or, more specifically, whom to bring on board.

If Democrats take control of the government in 2021, a big question is how much the party should partner with Republicans and the private sector to put a climate plan in place. Tied to that question is what to do about the Senate filibuster, an obstacle to rapid legislative change that some Democratic lawmakers consider a time-honored tradition.

The convention and its side events have given different factions an opportunity to lay the groundwork for those fights.

Progressives are pushing Democrats to get comfortable with the idea of steamrolling the opposition, even as Biden staffers and donors have staked out a more conciliatory approach. But even among them, there are differences over the limits of inclusion.

Stef Feldman, Biden’s policy director, said the former vice president has demonstrated an ability to work with industry and Republicans — a skill she said would buoy the chances of big, lasting change.

"I think the vice president really does think that the moment is ripe for the country as a whole to rally around a big investment that allows us to do two things at one time: address the climate crisis and create good jobs," she said during a Monday panel.

The next day, Feldman suggested that Biden still sees a chance to win Republican support for his climate and infrastructure plans.

During the 2009 stimulus debate, she said, "Vice President Biden played a key role in going up to the Hill, getting those final three Republican votes needed to get that done. And he will do it again as president."

But other Biden advisers said that’s not the only way.

After such deliberative outreach, she said, lawmakers should get on board or get out of the way.

"Look, he’s going to use his executive authority from day one," said McCarthy, now the head of the Natural Resources Defense Council, during a Monday panel.

"And he’s going to make demands on Congress, as well, but he isn’t going to wait around for Congress to act. Those days are long past," she said.

‘Washington can’t do it alone’

Corporate leaders from General Motors Co., Dominion Energy Inc., United Airlines Inc. and other heavy polluting industries have tried to assure Democrats they would be enthusiastic partners in government.

Progressives have been wary of the corporate influence such cooperation could entail. Biden’s allies are more eager to work with industry, but their vision for decarbonization still could hurt some sectors.

Lauren Riley, managing director of sustainability at United Airlines, said her company has been investing in low-carbon jet fuel and other ways of cutting emissions. But the private sector can only do so much, she said, and she urged more funding for federal research.

"Washington can’t do it alone," she said. "Neither can industry."

Riley also suggested that companies are implementing sustainability policies as a way to retain credibility — and influence — on the issue.

"These [policies] really are going to be indicators of a progressive agenda that’s going to make you relevant, not just to the bottom line, but also to the public at large in the next 25 to 50 years. And quite honestly, if we don’t take action now, there’s not a whole lot of ability to be able to influence that down the line," she said.

But Biden’s infrastructure plan could squeeze airlines regardless of their policies.

Dennis Mehiel, a major donor and bundler for Biden, said one of the most popular parts of the nominee’s plan was expanding high-speed rail.

Jane Kleeb, chair of the Nebraska Democratic Party and a board member of Our Revolution, told activists that industry hurts people most when it makes decisions alone.

"We can’t make the same mistakes as Big Oil did 50 years ago, or 100 years ago, when they were creating that energy infrastructure," she said at a Tuesday event by the DNC Council on the Environment and Climate Crisis.

"We need to make sure that farmers, ranchers, union workers and climate advocates — along with the big clean energy corporations — are all at the table together, building out that clean energy future. If we don’t do that, we’re going to end up in a situation where folks’ land is being taken advantage of and they’re not profiting in the same ways that big corporations are."

"If we’re going to expand the clean energy economy, that’s going to require investment in the grid, investment in electric transmission, those kinds of things. And if we don’t have an understandable process for siting those kinds of projects — that have a beginning and an end — then I think it gets very challenging," he said, adding that permitting "should be rigorous, no question about that."

But progressives remain wary of such changes, especially at the behest of utilities like Dominion, which recently scrapped plans for the $8 billion Atlantic Coast gas pipeline in part due to permitting challenges from environmentalists.

Feldman assured industry players that Biden sees them as vital to his would-be administration’s success, even as he would prosecute environmental crimes more aggressively.

"One of the key lessons of [the 2009 American Recovery and Reinvestment Act] was that you need to effectively work with business leaders to leverage private sector investment," she said, describing government funding as an amplification of industry investments.

Biden, who served 36 years in the Senate, has sent mixed signals about whether he would push Democrats to eliminate the upper chamber’s 60-vote requirement to end a filibuster.

During the presidential primary, he ruled out nixing the filibuster. But in July, Biden cracked open the door to that possibility if Republicans refuse to work with him: "It’s going to depend on how obstreperous they become."

But some in Biden’s circle remain hopeful it won’t come to that. And while many progressives oppose the filibuster, some are preparing workarounds in case they can’t nix it.

Mehiel said Biden’s climate plans are so popular, and the need for economic stimulus so great, that his legislation could force a political realignment.

"We want it to pass with overwhelming majorities in both houses of the Congress," he said.

That’s an unrealistic expectation in the face of partisan division and corporate influence, progressives say.

If the filibuster remains, Biden still could maneuver part of his agenda — like a clean energy standard — through the budget reconciliation process, which requires only a majority to pass, said Julian Brave NoiseCat, vice president at the think tank Data for Progress.

If Democrats do get the votes to end the filibuster, he said, they should push ahead with an even broader package of democracy reforms. House Democrats already have passed bills to expand voting access and grant statehood to the District of Columbia.

Whether that happens, he said, depends on "how willing Democrats are to have the political will to weather through maybe a bad news cycle or two."

That question already rankles some people.

As NoiseCat described ways to circumvent or eliminate the filibuster over a Zoom-mediated happy hour, some participants spoke up in the chat.

"Very distressing to hear that Dems also see winning as the most important thing, even more important than checks and balances," one viewer, Nicholas Poggioli, wrote.