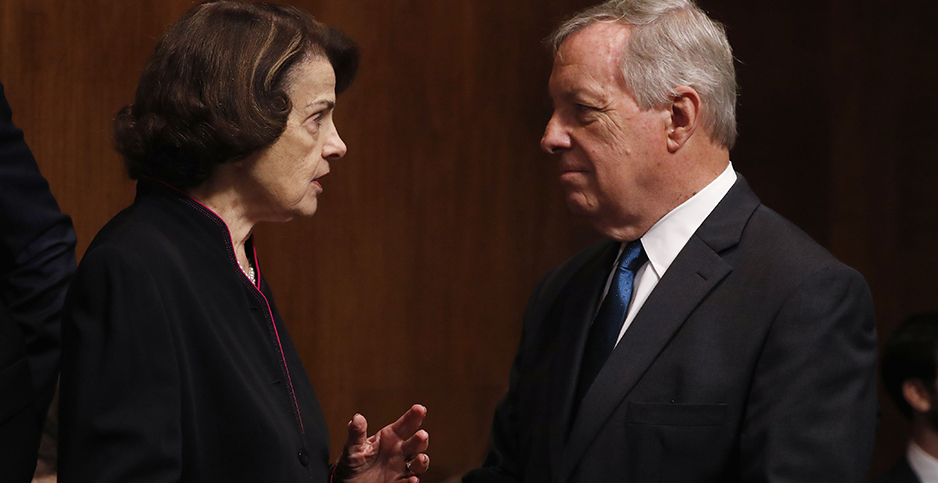 Activists are pressuring Senate Democrats, including Sens. Dianne Feinstein (D-Calif.) and Dick Durbin (D-Ill.), in the run-up to a vote on the "Green New Deal." Jim Bourg/SIPA/Newscom

If Senate Majority Leader Mitch McConnell (R-Ky.) calls a vote on the "Green New Deal," it looks likely that many — or even all — Senate Democrats would vote "present" to avoid a public intraparty fight, said activists, lawmakers and congressional aides.

The environmental group behind the climate resolution is not planning to punish Democratic lawmakers for doing so — a departure from the Sunrise Movement’s recent history of attacking both Democrats and Republicans who question the "Green New Deal," a massive government-led jobs program.

"This vote is a sham," said Evan Weber, co-founder and political director of the Sunrise Movement. "Mitch McConnell obviously doesn’t support [the "Green New Deal"] so he’s trying to put [the vote] forward as a political ploy."

Because of that motivation, Weber said he would be fine with Senate Democrats simply voting "present" on the resolution — as most of them did in July 2017 when Senate Republicans tried to split the Democratic caucus by holding a vote on "Medicare for All," a similar hot-button issue on the left.

"I think it’s perfectly reasonable and respectful for Senate Democrats to call it out for what it is, and if voting present is how they want to do that, by all means go for it," Weber said.

The maneuver also could spare Senate Democrats and the Sunrise Movement from a politically difficult or embarrassing result.

So far, about a dozen senators have co-sponsored a Democratic-led resolution in favor of the "Green New Deal."

And since McConnell first floated the idea of holding a vote on the "Green New Deal," there’s been little indication that Senate Democrats would come out in force to support the plan, which calls on the U.S. to rapidly "achieve net-zero greenhouse gas emissions."

That includes a 10-year goal of generating "100 percent of the power demand in the United States through clean, renewable, and zero-emission energy sources."

Asked last week how he would vote on the "Green New Deal," Senate Democratic Whip Dick Durbin of Illinois wouldn’t say. "At this point … I can’t tell you," Durbin said on MSNBC’s "Morning Joe" program. "I’ve read it and I’ve reread it and I asked [sponsor Sen.] Ed Markey [D-Mass.], what in the heck is this?"

Democrats will talk over strategy for the "Green New Deal" vote during their caucus meeting today and come away with a "consensus position," Sen. Ben Cardin (D-Md.) told reporters.

But the early signs suggest Democratic leadership will try to keep the caucus together to avoid political damage. To that end, several senators said yesterday they’re leaning toward voting "present" and using the opportunity to point out that Republicans have not brought any real measure to the floor to address climate change.

One of those was Sen. Brian Schatz (D-Hawaii), who said McConnell’s attempt to "troll" Democrats with the resolution vote is only giving them a bigger platform to talk about climate change.

"I think this was tactically clever on Leader McConnell’s part, but strategically not smart at all because now we’re talking about climate," he told reporters yesterday. "And that’s not terra firma for them."

Sen. Chris Murphy (D-Conn.) said a unanimous "present" vote would be fine with him, because it would discourage McConnell from using the Senate floor for "political theater."

"McConnell just said two weeks ago that he didn’t think we should spend time on the floor bringing up legislation that won’t get the president’s support," Murphy said. "When it’s an effort to own the libs, he thinks about the floor a little bit differently."

Still, widespread "present" votes on the climate resolution are unlikely to quell debate on the left over the proposal. Activists with the Sunrise Movement will fan out across the country today to lobby federal lawmakers, including moderate Democrats such as West Virginia Sen. Joe Manchin.

"What we would love for all Democrats to do is come to the table and begin to help flesh out the many policy details that will be needed to actually make the Green New Deal a reality," Weber said.

Whether the visits make a difference is another question. Sen. Dianne Feinstein (D-Calif.) drew the ire of Sunrise Movement proponents Friday for lecturing its supporters on climate politics and the "Green New Deal."

"I’ve been doing this for 30 years. I know what I’m doing," she told one group of young activists. "You come in here and you say it has to be my way or the highway. I don’t respond to that."

Instead, she offered a plan that would use policies such as a carbon tax to reduce climate-warming emissions (Climatewire, Feb. 25).

Inseparable from the "Green New Deal" debate is the high-stakes fight for the White House. At least six Democratic senators with presidential ambitions are co-sponsors of the climate resolution, a sign that they see the climate issue as a key to victory.

Former Senate Majority Leader Harry Reid (D-Nev.) likes it, too. "If you look at this Green Deal or whatever they call it, if you really look at it, I don’t know why anyone could oppose it," Reid told The Nevada Independent.

Republicans also see value in the "Green New Deal" — though mostly as a caricature to pillory. Not one Senate Republican indicated he or she would support the resolution when contacted by E&E News. Several were quick to lay out their opposition.

"It’s a socialist manifesto that lays out a laundry list of government giveaways, including guaranteed food, housing, college, and economic security even for those who refuse to work," Sen. John Barrasso (R-Wyo.) said in a statement. "As Democrats take a hard left turn, this radical proposal would take our growing economy off the cliff and our nation into bankruptcy."

Overhanging all this maneuvering is the expectation that there’s little chance for meaningful climate legislation to become law when the White House is occupied by President Trump, who has described global warming as a problem that can reverse itself (Climatewire, Nov. 15, 2018).

The lack of an actual bill to consider has thrust the "Green New Deal" into the spotlight, even though it’s little more than a symbolic resolution at this stage. The lack of specifics also makes it easier for both liberals and conservatives to use it as a political weapon.

It’s one reason why McConnell wants to bring the proposal up for a vote. And it’s also why several hundred protesters descended on his Capitol Hill office yesterday to protest his lack of action on climate change and the amount of campaign contributions he’s received from the oil and gas industry. (About $2.2 million over the course of his career, according to the nonpartisan Center for Responsive Politics).

More than 40 activists were arrested during the rally.

Clarification: This story was updated to provide a fuller representation of the "Green New Deal" and its goals of decarbonization.