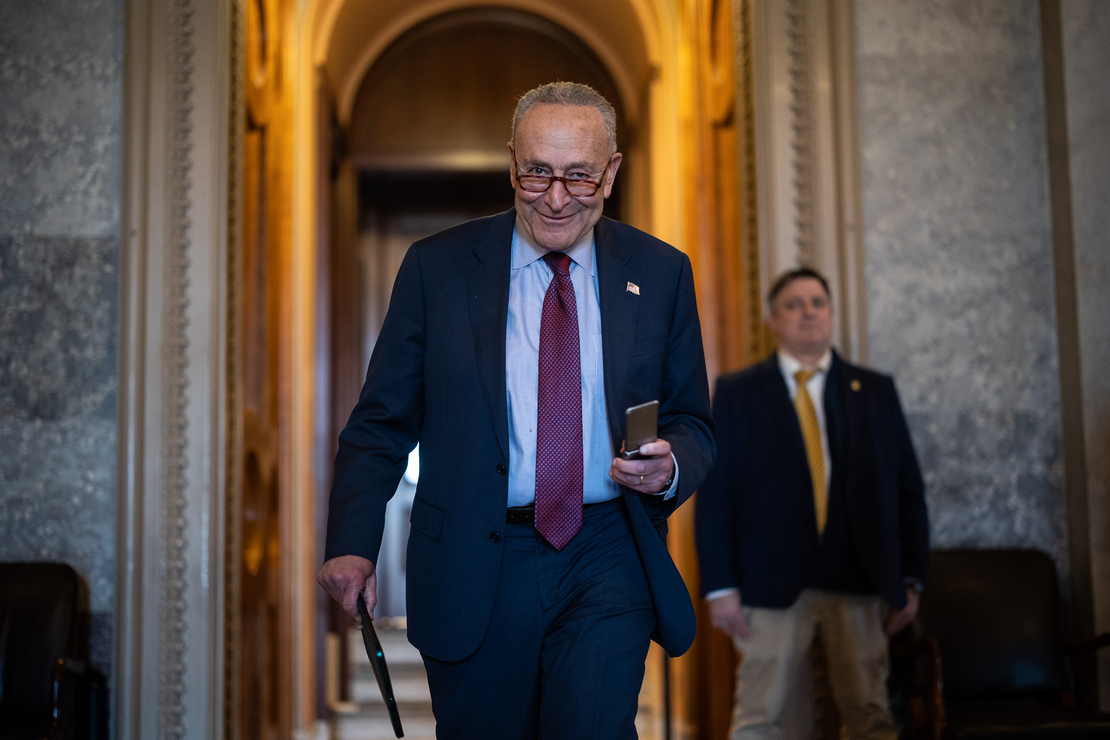 Democratic leaders yesterday called on executives of major oil and gas companies to stop stock buybacks and dividends and instead provide short-term relief at the pump and long-term investment in clean energy.

The challenge from Senate Majority Leader Chuck Schumer (D-N.Y.) and leaders of the House Oversight and Reform Committee, among others, could be a preview from Democrats as they plan to argue in multiple hearings this week that high gas prices are a consequence of corporate greed.

Central to that attack is a new focus on how oil companies allocate their profits.

Oil companies are “lining the pockets of their shareholders and their corporate executives in stock buybacks, which do nothing, absolutely nothing, to advance the American economy or to deal with the oil crisis,” Schumer said on the Senate floor yesterday.

“Maybe instead of giving the money to the shareholders, they should give money to their customers by lowering the price,” he added. Companies buy back open shares on the market in order to boost a stock’s value.

Democrats have scheduled hearings this week to investigate the transparency of the oil markets. The first of those hearings is this morning at the Senate Commerce, Science and Transportation Committee (E&E Daily, April 4).

Prices have spiked to highs not seen in over a decade as an already tight oil supply from the pandemic has collided with market uncertainty over Russia’s invasion of Ukraine.

Democrats suggested the companies would rather execute stock buyback purchases from windfall profits rather than produce more to keep prices lower.

A letter from Oversight Chair Carolyn Maloney (D-N.Y.) and Environment Subcommittee Chair Ro Khanna (D-Calif.) to leading executives of oil and gas producing companies called for the organizations to end stock buybacks in favor of more investment in clean energy.

“As Vladimir Putin’s illegal war against Ukraine is raising gas prices and hurting Americans at the pump, fossil fuel companies are taking advantage of the crisis by raking in record profits and spending billions of dollars to enrich their executives and investors,” the two wrote.

Prior to the current energy price spike, the two lawmakers were leading an investigation into oil companies’ involvement in spreading misinformation on climate change over the past five decades (E&E Daily, Nov. 2, 2021).

According to the letter, companies like Exxon Mobil Corp., Chevron Corp., BP PLC, and Shell PLC last year “spent more than $44 billion to enrich investors with stock buybacks and dividends.” That number could go at least to $32 billion this year, the two wrote, “while committing less than half that amount to urgently needed lower-carbon investments.”

“Big Oil must immediately stop profiteering off the crisis in Ukraine,” they added.

The oil industry and their Republican allies on Capitol Hill have placed the blame for high prices on the Biden administration. They have pointed to the cancellation of the Keystone XL pipeline and a pause on new lease sales for federal land as chief culprits. But experts have said such accusations are misleading and that their solutions would have little impact on prices at the pump (E&E Daily, March 15).

In recent weeks, Republicans have floated dozens of bills, many of them a repackaging of various hobbyhorses (E&E Daily, March 30). Lawmakers are expected to make the case that expanded domestic production of fossil fuels is a national security priority in the upcoming hearings.

To further that point, Energy and Commerce Republicans announced that retired Lt. Gen. H.R. McMaster, who served as national security adviser during the Trump administration, would appear as their witness for tomorrow’s hearing with executives from six of the world’s largest oil companies.

“No one understands this better than someone with the background and experience of H.R. McMaster,” E&C ranking member Cathy McMorris Rodgers (R-Wash.) said in a statement. “He will impress upon the Committee why America can’t cede its global leadership with a rush-to-green agenda that shuts down American energy, raises prices, emboldens Russia, and makes us reliant on China.”