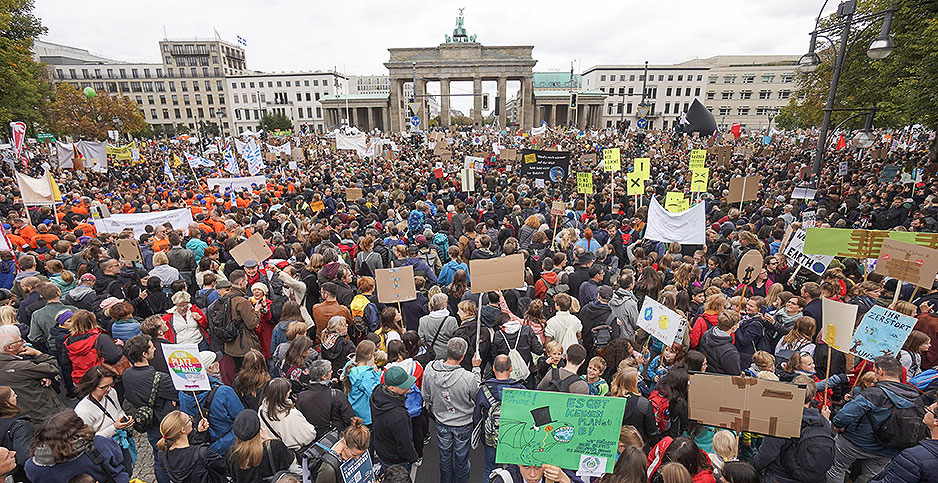 In Washington alone, more than 1,000 people toting banners and signs stretched down the portion of Pennsylvania Avenue leading up to the U.S. Capitol. Videos on Twitter showed packed parks and streets in other major cities, including Berlin and New York.

"Climate strikers" gathered at John Marshall Park on Pennsylvania Avenue and began marching toward the U.S. Capitol shortly after 11 a.m. They gathered at the foot of the Capitol, filling about two-thirds of the lawn between the building and the Capitol Reflecting Pool.

"There is no reason why one human being should be suffering on this planet. There is no need," Tokata Iron Eyes, a 16-year-old activist from the Standing Rock Sioux Tribe, told the crowd from a stage. "The Earth gives us abundance in every single area of our lives, everything we’ve ever needed. Why is it that humans have forgotten how to live with that?"

Signs included "Let the youth be heard" and "There is no planet B," among other common climate protest slogans. One striker carried a poster that simply said "YOLO" — the acronym for "You only live once," popularized by the rapper Drake.

The strike day, which comes ahead of the start Monday of U.N. Climate Change Summit, caps weeks of advocacy in the United States by Greta Thunberg, the Swedish climate activist who sailed the Atlantic last month to avoid the greenhouse gas emissions from flying (Climatewire, Aug. 9).

Thunberg, 16, began skipping school on Fridays a year ago to sit outside the Swedish legislature in Stockholm calling for action on climate change. Her lonesome protest has since ballooned into the worldwide Fridays for Future movement made up of thousands of teens and high school students. Today’s strikes highlighted just how large that coalition has become.

Thunberg spent this week at various events on Capitol Hill, meeting with lawmakers and appearing at a joint House hearing Wednesday. Her overarching message to U.S. lawmakers: Stop talking and start acting.

In a speech to lawmakers Wednesday, Thunberg said she is consistently surrounded by "fairy tales — business leaders, elected officials all across the political spectrum spending their time telling bedtime stories that soothe us and make us go back to sleep" (E&E Daily, Sept. 18).

"The problem we are facing is not the lack of ability to dream or to imagine a better world," Thunberg said. "The problem now is that we need to wake up. It is time to face the reality, the facts, the science."

Today, Thunberg is in New York City, where school officials said 1.1 million students would be excused from class for attending the strike.

"I think it needs to be elected officials who are here," he told E&E News. "After all this mobilization, we can’t just go back to our system."

Foster also highlighted the diversity of the protesters in D.C. and elsewhere.

"As a person of color [being here], it shows this movement isn’t just for one people," he said. "In every single continent, in every single country, youth are rising up. It shows how interconnected and how united we are as one people in crisis."

She added, "People who don’t believe in it [climate change] are dumb."

Alissa Weisman, 17, one of the strike’s organizers, said youth protests are increasingly important.

"In this day and age, in this environment, the youth are being taken more seriously, because youth activists are becoming more and more common," she said.

"Because it’s our future that is in jeopardy, we need to do everything we can take control and protect ourselves, because at the rate we are going, not enough change is going to be made," Weisman said.

Some of the strikers weren’t young but showed up to support the students.

"We’re here to support the kids," said Laura White, 71, of Montgomery County. "I’ve been in a lot of movements, and sometimes they just bubble up from the bottom and you’ve got to get behind it. So the adults are screwing up. They’re not taking it seriously."

Kathy Awkard, also of Montgomery County, said she was specifically inspired by Thunberg.

"She’s so young, but she really gets it," said Awkard, 58. "It’s taken me my whole life to really start to understand how connected everything is."

Jocelyn Smit, a member of a parent environment group at Oyster-Adams Bilingual School, said she was marching with students ages 4 to 11.

"We care about the environment. You’ll see for them it’s a really important thing," she said of the students. "They really need a planet to live. So they are all very motivated to come and do the march."

"The alarm bells have been sounding for an entire generation, but this is the moment for you to be heard," Barragán, a Green New Deal co-sponsor and member of the Energy and Commerce Committee, told the crowd. "You’re being heard across this city, across this nation and across this entire planet."

The strikers may have changed the mind of at least one other lawmaker.

Sen. Martin Heinrich (D-N.M.) announced during the strikes that he now supports the Green New Deal, after holding out on signing on to the resolution from Sen. Ed Markey (D-Mass.) and Rep. Alexandria Ocasio-Cortez (D-N.Y.).

"I’m supporting a Green New Deal because this rising generation of activists understands what we’re up against, and is willing to propose the kind of bold changes that equal the scale of that problem," Heinrich, a member of the Senate Energy and Natural Resources Committee, said in a video.

Climate activists are also planning to block traffic at various key points in Washington on Monday, the same day the U.N. climate summit is set to begin in New York City.

The Shut Down D.C. Strike Coalition said it is expecting "hundreds" of students and others, including author and activist Naomi Klein and climate activist Rev. Lennox Yearwood to participate in the blockade, intended as a preview of similar planned disruptions around the world on Oct. 7.

Marches around the world

Events kicked off in Australia, where protesters marched in 110 towns and cities, including Sydney and the national capital, Canberra. Demonstrators called for their country, the world’s largest exporter of coal and liquefied natural gas, to take more drastic action to reduce greenhouse gas emissions.

"Even though we ourselves aren’t sick, the planet which we live on is, and we are protesting and fighting for it," said Siobhan Sutton, 15, a student at Perth Modern School.

Organizers estimate more than 300,000 protesters took to Australia’s streets in what would be the country’s biggest demonstration since the Iraq War in 2003.

Hundreds of rallies took place across Europe, including in the Czech Republic, Germany, Britain and Poland, which is still widely coal-reliant and where many middle schools gave students the day off to enable them to participate in the rallies in Warsaw and other cities.

In Berlin, organizers said 80,000 people gathered in front of the capital’s landmark Brandenburg Gate, not far from Chancellor Angela Merkel’s office, where the Cabinet was hashing out the final details of a plan to curb Germany’s greenhouse gas emissions.

In Helsinki, the Finnish capital, a man dressed as Santa Claus stood outside Parliament holding a sign: "My house is on fire, my reindeer can’t swim."

"We need to reclaim our constitutional right to clean air and water," said Aman Sharma, a 16-year-old protester in India’s capital New Delhi.

In Tokyo, hundreds of students and environmental activists marched through the business and shopping district of Shibuya, chanting "Climate justice!" while holding hand-painted placards made of cardboard with messages such as "Go green," "Save the Earth," and "The Earth is on fire."