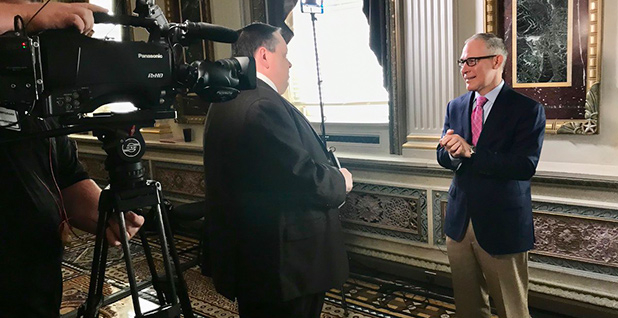 "Federal ethics laws prohibit public officials from using their position of authority for private gain. News accounts based on emails released pursuant to the Freedom of Information Act (FOIA) report that the Administrator discussed at least two business opportunities for his wife, Mrs. Marlyn Pruitt, with CEOs, apparently while on duty as EPA Administrator," the senators say in their letter.

Udall is ranking member on the Senate Appropriations subcommittee that oversees EPA. Carper is the lead Democrat on the Senate Environment and Public Works Committee, in which Whitehouse is also a member.

EPA IG spokesman Jeff Lagda confirmed that the watchdog office had received the letter but declined to comment further.

In May last year, a former EPA aide said in an email to a Chick-fil-A executive that Pruitt wanted to discuss "a potential business opportunity" with the company’s CEO.

That opportunity turned out to be Pruitt looking to secure his wife Marlyn a franchise restaurant with the company based in their home city of Tulsa, Okla., which ultimately didn’t come to fruition, The Washington Post reported this week.

The newspaper also reported that after Pruitt approached Concordia’s CEO, the group paid Pruitt’s wife $2,000 plus travel expenses for helping to plan a 2017 conference where the EPA chief was also a speaker.

Pruitt was asked by a local television reporter this week about him helping his wife secure a Chick-fil-A franchise. The administrator said he and his spouse were excited about joining the company and they were big fans (E&E News PM, June 6).

"I love, she loves, we love Chick-fil-A as a franchise of faith, and it’s one of the best in the country. So that was something we were very excited about," Pruitt said. "We need more of them in Tulsa. We need more across the country," he said. "So anyway, it’s an exciting time."

The senators cited the interview in their letter, saying, "The Administrator used the opportunity to promote the private business on television — another possible federal ethics violation."

They also noted that they had already asked the IG to review a Pruitt aide searching for new housing on behalf of the administrator as well as completing other personal tasks, including trying to buy a used Trump Hotel mattress (E&E News PM, May 31).

"We would like you to either supplement that investigation or open a new one to review whether the Administrator used his position — acting in his own capacity or through his official staff — to pursue private business opportunities to enrich himself or any members of his family regarding these two cases and any other financial opportunities for Administrator Pruitt’s family," said the senators.