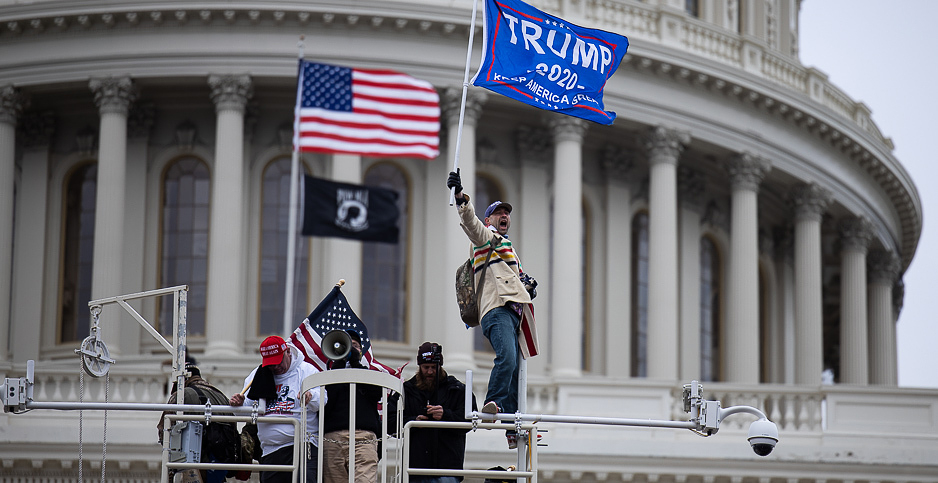 Democrats woke up early yesterday morning — if they’d even slept at all the night before — bleary-eyed but full of plans for what they’d do in a newly unified government.

In the two decisive Georgia runoff elections Tuesday, Democrat Raphael Warnock had been declared the winner in his bid to unseat incumbent Republican Sen. Kelly Loeffler, and it appeared Jon Ossoff, another Democrat, was on his way to beating former Republican Sen. David Perdue.

Their twin victories would split the Senate down the middle, 50-50, and, with Vice President-elect Kamala Harris serving as the tiebreaker, it would put Democrats in control of the Senate. All they had to do was get through a marathon joint session of Congress to certify the 2020 election for President-elect Joe Biden.

But by the time the Associated Press called Ossoff’s race at 4:16 p.m., the Capitol had been shut down for nearly two hours as a violent, pro-President Trump mob tore through the building in an unprecedented and frightening security breach that left at least one person dead and various others injured.

And while the events of the day didn’t derail lawmakers’ plans to reconvene hours later to finish the Electoral College certification, the episode could have profoundly changed the calculus for the weeks ahead, both leading up to Biden’s Jan. 20 inauguration and beyond.

Lawmakers returned to complete the certification process shaken and raw. Democrats blamed Republicans for enabling Trump’s false claims of election fraud, leading to what was tantamount to attempted insurrection. Many Republicans also condemned the violence but stopped short of directly condemning Trump and his role in inciting the chaos.

The preceding several hours of terror took the wind out of the sails of the GOP’s plan to challenge multiple states’ electoral college votes — and prompted many Republicans in both chambers to change their minds about taking a symbolic, but divisive, stand against Biden’s clear victory in November.

Even Loeffler, fresh from her loss to Warnock, took to the Senate floor to share that "the events that have transpired today have forced me to reconsider, and I cannot now in good conscience object to the certification" of electors.

"It is clear this Congress will not be the same after today, and I hope it will be the better," said House Minority Leader Kevin McCarthy (R-Calif.), who still voted to object to Arizona’s electoral votes going to Biden.

The days to come, however, will determine the extent of the GOP’s enduring loyalty to the outgoing president, which will in turn determine what the two parties can do together to enact a legislative agenda — from further COVID-19 relief to an infrastructure bill to combatting climate change to overhauling the nation’s health care system.

Whatever comes next, it’s not likely the Senate will do much until after Biden’s swearing-in. Well in advance of the Georgia runoffs, both parties agreed not to pursue any new legislation until after Jan. 20.

Though Republicans could technically enjoy and assert their majority for another two weeks until Harris becomes the tiebreaker, Democrats hold enough of an edge currently to thwart the other party’s ability to get anything meaningful done. Even seating Warnock and Ossoff before Inauguration Day would have little immediate effect on legislating.

The prospects for scheduling confirmation hearings for Biden’s Cabinet nominees prior to the inauguration also seem slim at this point, even as the president-elect is nearly finished filling out his team and many of his picks have started making the rounds to lawmakers for their courtesy visits, including Interior nominee Sen. Deb Haaland (D-N.M.), Energy nominee Jennifer Granholm and EPA nominee Michael Regan.

Democrats would rather not wait to get this process started, having pointed out that there is precedent for beginning confirmation proceedings prior to a new president’s swearing-in. However, the Tuesday election results have at least buoyed their confidence in getting these nominees confirmed more easily.

Sen. Tom Carper (D-Del.), who expects to be the next chairman of the Senate Environment and Public Works Committee, expressed hope for a smoother path to confirmation for Biden’s Cabinet nominees.

"He has nominated just a terrific team," said Carper. "And I think the outcome of yesterday’s votes in Georgia better ensure that that team will be largely confirmed expeditiously, and they can go to work for our country."

What’s more likely to occur is that the next two weeks will serve as a transitional period, where Democrats start preparing for their unexpected reversal of fortunes and in many cases switch offices with their Republican counterparts, who will go from majority leaders to minority leaders, committee chairs to ranking members.

It wasn’t clear yesterday, however, whether Senate Minority Leader Chuck Schumer (D-N.Y.) had a chance to speak substantively yet with Senate Majority Leader Mitch McConnell (R-Ky.), who will be switching roles in the coming days.

"We have a lot of things to discuss," said Schumer.

It’s hard to foresee when they would have had time to sit down given the turn of the day’s events. As of late yesterday, McConnell also had yet to publicly acknowledge the Democrats’ victories in Georgia.

The day started out with Democrats jubilant about the Georgia results, united across ideological lines in their shared excitement to be in control of the legislative and executive branches of government for the first time since 2010.

In the morning, Senate committee ranking members were cheerfully calling each other "chairmen" and speculating about the legislation they would shepherd through their panels.

Sen. Brian Schatz (D-Hawaii) said a Democratic majority would breathe new life into hopes of advancing a bill to address the climate crisis.

"Having the gavel is everything," Schatz said. "It’s still a closely divided Senate, and we’re still going to want to do things on a bipartisan basis, but you never really have a chance to initiate climate legislation if Mitch McConnell has the authority to determine what hits the floor."

On the other side of the Capitol building, members of the fiscally conservative Blue Dog Coalition were thumping their chests about what clout they’d have in setting new policy agendas.

"Blue Dogs intend to play a very active role in the development of the legislation and the legislative agenda this coming Congress," said Rep. Stephanie Murphy (D-Fla.), adding, "the House majority runs through Blue Dogs."

But by yesterday evening, nobody was talking about the Georgia elections or a unified agenda. In fact, some of the highest-ranking House Democrats were talking about impeaching Trump, with just days left in his tenure, for fanning the flames of violence and doing little to condemn the insurrection. Some were collecting signatures calling for Vice President Mike Pence to invoke the 25th Amendment to remove Trump from office.

It’s a position that could divide Democrats looking to unite around shared priorities and further alienate them from Republicans still sore about losing the White House.

"I don’t think that’s going to happen in a short time frame," said Sen. Tammy Duckworth (D-Ill.), "and frankly that’s not something that will help the situation."

Meanwhile, Democrats were making statements yesterday that will not engender bipartisan compromise and could undermine efforts to renew goodwill across the aisle and chambers.

Rep. Tim Ryan (D-Ohio) tweeted his disgust watching Sen. Ben Sasse (R-Neb.) deliver a speech critical of Trump when he had supported him months earlier in a bid to spare himself a primary challenger.

"He was silent. He enabled this madness," said Ryan. "We remember."