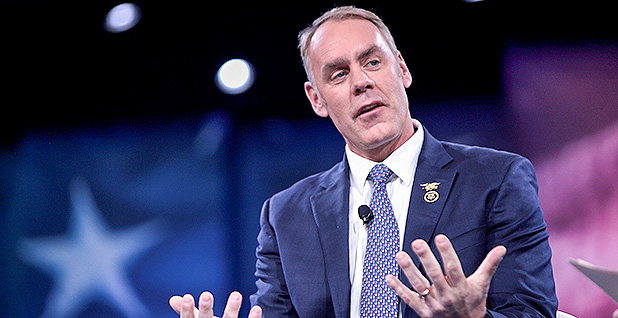 Democrats crafted a massive opposition book on Rep. Ryan Zinke last summer that could help fuel questions about his business affiliations in the weeks before his confirmation hearing as Interior secretary under President-elect Donald Trump.

The Democratic Congressional Campaign Committee contracted an outside group to prepare the 700-page opposition research report, which provides thousands of details about the second-term Montana Republican. Topics range from Zinke’s business and personal finances to his voting record and offhand comments captured by the press. He once called Hillary Clinton the "Antichrist."

The research is so granular that it even points to a Santa Barbara, Calif., boat slip in his wife’s name.

The document is posted on the DCCC website and is connected to a page outlining 2016 congressional races.

Although it appears to offer little that has not already been previously reported by local and national media, the document details various political issues that have arisen during Zinke’s time in public office. For example, it includes a section alleging that Zinke didn’t really live in Montana but had instead relocated to California.

As evidence, the report includes a color photo of an invitation email detailing a 2016 fundraiser hosted by the congressman and his wife, Lola. The event was held in Santa Barbara, Calif.

Previous news reports by the Independent Record in Helena, Mont., questioned why then-candidate Zinke had posted campaign signs in a Santa Barbara suburb. Zinke told the newspaper that he and his wife, who is from the area, had moved back in the winter to care for her sick mother.

Another sticky point highlighted in the report centers on allegations that his campaign coordinated with a super political action committee that Zinke started in 2012. He later severed ties with the group a month before announcing his run for Congress.

The Special Operations for America PAC, or SOFA, spent more than $175,000 in independent expenditures, which can include sending mail or buying ads, for Zinke from 2014 through 2016, according to data compiled by OpenSecrets.org.

The DCCC document lays out a litany of complaints concerning Zinke’s interaction with the super PAC. "He has made a mockery of campaign finance rules, which require Super PACs to operate independently from campaigns without ‘coordination,’" it says.

According to documents filed by SOFA with the Federal Election Commission in 2013, the PAC paid $5,000 to Continental Divide International LLC, a company of which Zinke listed himself as a co-owner in a 2012 document filed with the state of Montana. The DCCC report says FEC documents show that the super PAC paid the company nearly $40,000 between 2012 and 2014 in consulting fees and expense reimbursements.

In 2014, the Campaign Legal Center filed a complaint with the FEC asserting that the super PAC and Zinke’s campaign paid for and shared photos of the candidate, which he used in campaign materials.

"It’s fair to say Zinke broke new ground when he turned over the reins of his super PAC to a trusted ally, then ran for Congress and relied on the support of that super PAC," said Brendan Fischer, associate counsel of the Campaign Legal Center.

A spokeswoman for Zinke did not respond to requests for comment.

It appears research books were not compiled for every Republican running for a House seat in the 2016 election, an analysis of the website found. Books that were created varied in length from just over 100 pages to 738 pages for Republican Rep. John Mica, a 12-term congressman defending his seat in Florida’s 7th District.

Nearly all of the books posted for the 2016 House races were created by the DCCC’s in-house research team; however, DCCC spokesman Tyler Law confirmed that an outside firm had compiled the report on Zinke.

The expansiveness of the research may be related to reports that Zinke was approached by GOP leadership in the Senate as a possible replacement for Democratic Sen. Jon Tester of Montana (Greenwire, Dec. 19, 2016).

Law played down the size of the research book.

"While this book is not necessarily lengthier than usual, there’s no question that Congressman Zinke has a lot of troubling positions and questionable associations that needed to be brought to light," he said in an email.

A spokeswoman for the Montana Democratic Party said she was sure that "part of it" was used by the campaign of Denise Juneau, but could not confirm how much. Juneau, Montana’s state superintendent of public instruction, challenged Zinke for his House seat last year. Zinke, the incumbent, won the election with 56.2 percent of the vote.

Mike Phillips, a former research consultant and founder of Vigilant Web, a startup that builds public records research tools, said he was not surprised by the existence or length of the DCCC research book on Zinke.

"Research is becoming more and more comprehensive, and folks are digging deeper into the profiles and experience of candidates that are running for office and hoping to serve," he said. "Part of that is being facilitated by the development of more expansive technologies and greater access to data on the internet as well as more powerful tools."