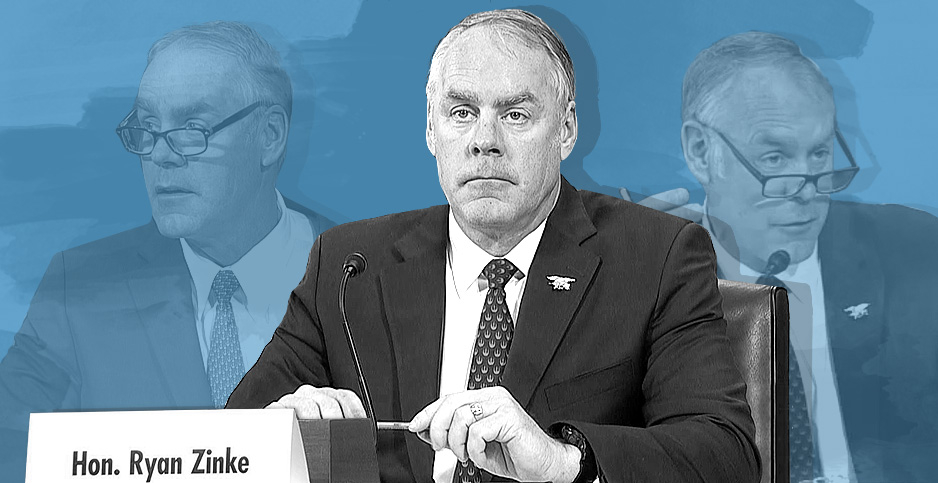 A Democratic-controlled House would bring the hammer down on the Trump administration’s Interior Department.

It could get messy, fast.

Oversight hearings would accelerate from slow pitch to hardball. Lawmakers who now can’t get their letters answered would wield gavels and subpoenas. Trump’s Interior budget proposals for the next two years would be dead before their arrival on Capitol Hill.

Interior Secretary Ryan Zinke’s big idea of reorganizing the department of some 70,000 employees could shrink or simply vanish. Top Interior vacancies could become even harder to fill, as potential contenders weigh the escalating hassles.

Current appointees, meanwhile, could start eyeing the exits; some wonder whether Zinke himself would find a 2020 gubernatorial candidacy in his home state of Montana more congenial or whether the former Navy SEAL would stay and fight.

"I was trained never to quit," Zinke recounted in his autobiography, "American Commander."

The House Natural Resources Committee under a chairmanship of Arizona Rep. Raúl Grijalva promises to heighten scrutiny of Zinke and his department.

Currently the resource committee’s senior Democrat, the 70-year-old Grijalva has a clear path to the chairmanship if his party secures the 23 seats needed to reclaim control of the House (E&E Daily, Oct. 4).

"What I would want to do if we’re in the majority, and I don’t want to jinx it, is to act as a co-equal branch of government," Grijalva told E&E News in an interview, adding that "we don’t want to start with threats … how Zinke deals with this will dictate how we go forward."

Pointedly, Grijalva spoke of a need to "beef up our investigative side and our legal" team.

The oversight and investigations subcommittee of the House Natural Resources Committee held its last hearing in March 2018. It was the oversight panel’s seventh hearing this Congress, and they have not been very adversarial, featuring cozy setups like "Policy Impacts of Excessive Litigation Against the Department of the Interior."

The full House committee has conducted hearings billed as oversight, as well, such as one last month about the Columbia River power system’s importance to the Pacific Northwest’s economy. Last month, the committee’s chairman, Rep. Rob Bishop (R-Utah), wrote to Zinke to request documents regarding workplace misconduct policies.

That’s not enough, according to Grijalva.

"Nonexistent," the Arizona Democrat said of the GOP oversight. "The [hearings] we did have were on things like how bad the Endangered Species Act was or the need to expedite the process of extraction."

Get ready for subpoenas

While under GOP command the last two years, the resources committee has not issued any subpoenas. During the Obama administration, the committee issued multiple subpoenas demanding Interior documents.

And the House resources panel isn’t the only committee likely to be targeting Interior.

Also on that list: the House Oversight and Government Reform Committee.

Gowdy didn’t act. But if Cummings assumes the chair next year, he can follow through.

The Oversight and Government Reform Committee also fields an Interior, Energy and Environment Subcommittee, whose hearings during the Trump administration have selected GOP-friendly topics like "Preserving Opportunities for Grazing on Federal Land."

The ranking member is Del. Stacey Plaskett (D-V.I.). If elevated to subcommittee chairwoman, she’d likely turn her panel’s attention to Interior’s often-overlooked Office of Insular Affairs, which has an annual budget of $628 million.

"It is my plan to bring much needed attention, through hearings, field work and investigations, into the federal government’s role in regulating our resources," Plaskett said last year when appointed as ranking member.

"The harm done by the Trump Administration extends beyond drilling and mining issues and has impacted the integrity of science, access to our parks, and now threatens to disrupt the entire Interior Department as you propose to create a new organizational model with no foundational analysis," McCollum told Zinke last April.

"Many of the ‘issues’ that they send press releases about, demanding expensive and time intensive investigations, the [inspector general] drops because there is nothing there," one Interior official said, speaking on the condition of anonymity. "They make for sexy press releases and clickbait, but there’s nothing to it."

Beyond intensified oversight, a Democratic-controlled House would move different kinds of natural resources bills. Some would simply send new messages about hot topics like the Endangered Species Act. Others could bring the Senate and Trump administration to the table.

"I think there are great opportunities on the issue of water, where in this Congress we continued to fight the last war of fish versus farms and gutting environmental protections," said Rep. Jared Huffman (D-Calif.), who’s in line to chair the House Natural Resources Subcommittee on Water, Power and Oceans.

Huffman cited his intention to resurrect proposals on "all sorts of clean water infrastructure investments" and on public lands wildfire resilience, among other priorities.

This Congress, Huffman introduced 10 bills that were referred to the resources committee. Only two received hearings or markups.

Overall, though, the Natural Resources Committee has been the most prolific House panels over the past two years, sending 181 bills on to House passage. Thirty-seven of those have become law, including 11 authored by Democrats.

Even without a more aggressive House, the two-year mark for any administration can trigger departures by officials at Interior and other departments seeking a change. It’s been that way a while.

"The turnover among political appointees running many federal agencies is such that the median length of service for these government executives is only 2.1 years, hindering the stability and continuity of leadership essential for effective management," the agency now called the Government Accountability Office reported in 1994.

Academic researchers similarly noted in a 2001 study that between 1933 and 1960, assistant secretaries in federal agencies served an average of 2.7 years while they served 2.3 years between 1964 and 1984. Other positions share roughly the same turnover rate.

During the Obama administration, for instance, James Watson joined the Bureau of Safety and Environmental Enforcement as director in December 2011 and departed in September 2013 for a job with the firm American Bureau of Shipping (Greenwire, July 9, 2013). Tom Strickland, who was Interior’s chief of staff and assistant secretary for the National Park Service and Fish and Wildlife Service under Obama, served at Interior from 2009 until 2011 (Greenwire, Jan. 10, 2011).

Both of Obama’s Interior secretaries — Ken Salazar and Sally Jewell — stayed on the job for about four years. During the George W. Bush administration, Interior Secretary Gale Norton held her post for about five years; Dirk Kempthorne was secretary for two years and seven months.

As for Zinke, unnamed administration officials reportedly told Fox News several weeks ago that he was under consideration for U.S. ambassador to the United Nations. There’s been no official announcement on that front since.