Dems debate in Motor City. Will cars and climate be a focus? 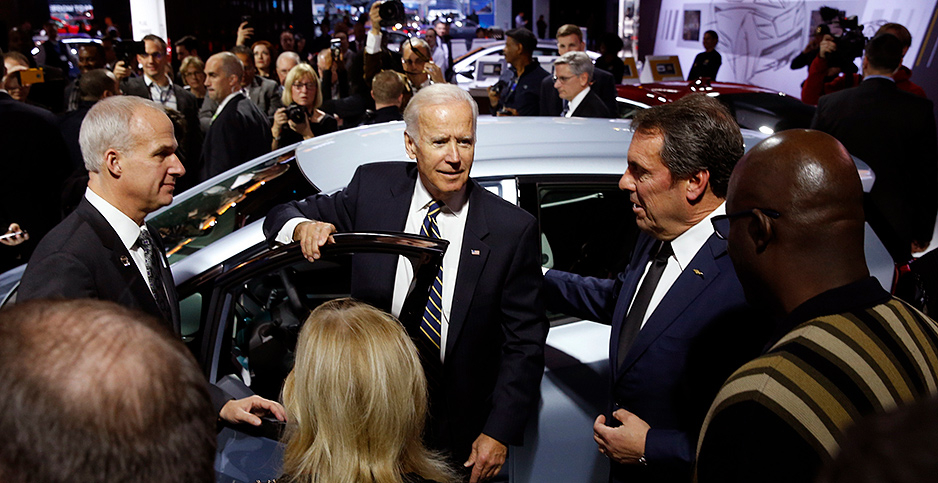 Joe Biden inspected a Chevrolet Bolt in January 2017 as vice president. He and other Democratic candidates for president will be in Detroit for a debate next week. Brendan McDermid/Reuters/Newscom

Environmentalists say one topic should take center stage at the Democratic presidential debates in Detroit next week.

It’s car companies and their contribution to climate change.

All three companies have headquarters in Detroit, where CNN is hosting two nights of debates at the historic Fox Theatre on July 30 and 31.

The debates come as the Trump administration prepares to dial back Obama-era clean car standards. The rollback stands to dramatically increase oil consumption and tailpipe pollution.

The Detroit matchup also comes after the transportation sector surpassed the power sector as the country’s largest source of carbon emissions. Cars and light trucks are responsible for the bulk of those emissions.

The candidates could harness the setting’s symbolism as the birthplace of cars to challenge automakers to address a major environmental problem, some climate advocates say.

"With transportation being the leading source of carbon pollution, the continued transition to cleaner vehicles is not merely an obligation but a huge opportunity for Detroit," said Ariel Hayes, political director for the Sierra Club.

Making up for Miami

At the last debates in Miami, climate change was discussed for less than 17 minutes (E&E Daily, June 28).

* Candidates are listed in the order they will appear on stage from left to right.

That’s despite the fact that Miami is often referred to as "ground zero" for climate change. The city is projected to see 1 to 3 feet of sea-level rise by 2060. And by midcentury, residents could face up to four months of scorching hot days that feel like 100 degrees, according to the Union of Concerned Scientists.

"This is a crisis facing our country and future generations. So I think we hope that this debate will be different," said Sara Jordan, clean energy program director at the League of Conservation Voters.

Unlike Miami, Detroit is not an obvious poster child for the effects of global warming. The city has a temperate climate for most of the year, with cold and snowy winters. It also sits 600 feet above sea level, meaning rising oceans pose a less imminent threat.

Even so, the Great Lakes saw record high water levels in May. While experts disagree about whether the flooding can be attributed to climate change, they warn that such events will become more common and costly as the planet heats up.

In addition, Detroit is the historic homeplace of the American auto industry, one of the nation’s top polluters.

In 2010, NASA published a study asserting that automobiles — not power plants — were officially the largest net contributor to planet-warming pollution in the world.

"Cars, buses, and trucks release pollutants and greenhouse gases that promote warming, while emitting few aerosols that counteract it," the study read. "In contrast, the industrial and power sectors release many of the same gases — with a larger contribution to [warming] — but they also emit sulfates and other aerosols that cause cooling by reflecting light and altering clouds."

Becker of the Safe Climate Campaign said it’s imperative that the candidates "address the automobiles that Detroit is a leading producer of and that are a major source of air pollution."

At the debates in Miami, Sen. Kamala Harris of California got into a tense exchange with former Vice President Joe Biden over his past criticism of federally mandated school busing as a means of desegregation.

* Candidates are listed in the order they will appear on stage from left to right.

In Detroit, the two candidates are slotted to take the stage together on the second night.

They’ll have a lot to talk about when it comes to clean car standards.

As vice president, Biden oversaw the historic 2010 agreement among major automakers to improve the fuel economy of cars and light trucks under the supervision of EPA, the Department of Transportation and California.

"Obviously, Joe Biden is connected to the Obama rules, and I would think he would want to talk about how important it is to repair the damage that Trump is doing," Becker said.

Still, Biden has a more complicated track record with the car rules than his time in the Obama administration suggests.

While the provision ultimately failed, his outlook had clearly changed.

"It seems to me our failure to set a national energy policy and reduce our consumption of oil has handcuffed our foreign policy and weakened us economically," Biden said at a 2006 hearing on energy dependence.

Harris, for her part, has been an outspoken critic of the Trump administration’s proposed rollback of the car standards (Climatewire, Jan. 22).

She grilled former EPA Administrator Scott Pruitt about the car rules during his confirmation hearing in January 2017, when she was still serving on the Environment and Public Works Committee. (She gave up her seat on EPW last year for a spot on the Judiciary Committee.)

Harris repeatedly pressed Pruitt on whether he would seek to revoke a Clean Air Act waiver that allows California to set more stringent vehicle emissions benchmarks than the federal government.

Pruitt refused to give a straightforward answer. But the Trump administration is widely expected to revoke the Golden State’s waiver when it finalizes the rollback this fall.

"I would stress Sen. Harris’ leadership when she interrogated Scott Pruitt about the waiver at his confirmation hearing," Ann Carlson, a professor of environmental law at UCLA, previously told E&E News.

"She pressed him hard and made clear that the waiver is crucial to California for both climate change and air pollution," Carlson said. "Her intervention was an important opening salvo in what we knew would be a long fight."

Biden is leading the field of 2020 contenders, with Sens. Bernie Sanders (I-Vt.) and Elizabeth Warren (D-Mass.) tied behind him, according to an NBC News poll released Friday.

‘A whole bunch of candidates’

Several other candidates have also supported legislation that would prevent the Trump administration from rolling back the car rules.

The bill would essentially reinstate the Obama-era standards and block President Trump from weakening them.

It’s co-sponsored by a raft of Democratic presidential contenders, including Biden; Warren; and Sens. Michael Bennet of Colorado, Kirsten Gillibrand of New York and Amy Klobuchar of Minnesota.

"There are a whole bunch of candidates who would be well-equipped and knowledgeable" about the car rules, Becker said.

When contacted for this story, some auto companies pushed back against the notion that they were laggards on climate.

"You may want to ask Detroit’s critics what happened here," he said.

"FCA will continue optimizing the fuel economy of the vehicles consumers are buying," he added in a follow-up email. "In addition to reducing emissions, this strategy ensures economic viability, which drives employment."

Of the multiple Democratic presidential campaigns contacted for this story, only the campaign of former Texas Rep. Beto O’Rourke responded in time for publication.

"We’re not yet sharing any plans for the debate at this time," a spokeswoman for O’Rourke said in an email.