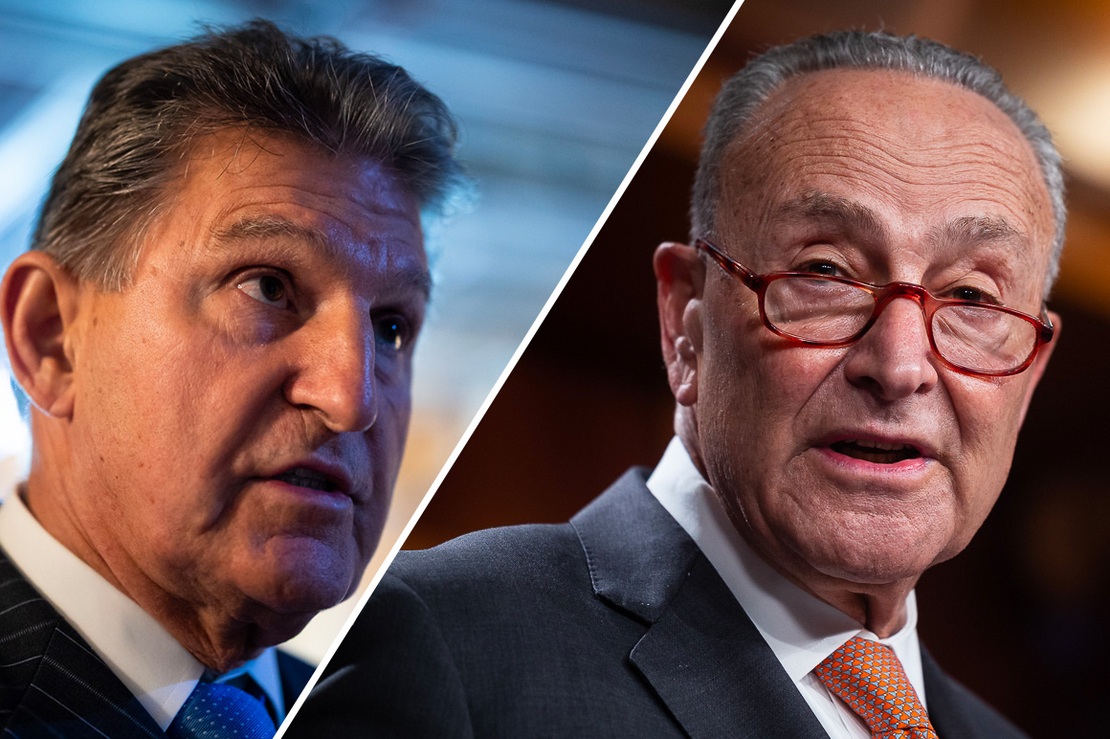 West Virginia Sen. Joe Manchin left his party in a climate bind, as Democrats prepare to move ahead this week on a budget reconciliation bill without the clean energy provisions they negotiated for nearly a year.

President Joe Biden on Friday called on Congress to pass a narrow bill that includes only an agreement on drug pricing and Affordable Care Act subsidies after Manchin said he would not vote on climate provisions and tax hikes this month in the wake of another round of high inflation numbers.

It would effectively mean meeting Manchin’s requests and putting an end to Democrats’ effort to pass climate policy along party lines under the Senate’s reconciliation rules.

Manchin said he was open to finalizing a climate deal in September if next month’s Consumer Price Index numbers improve (Greenwire, July 15).

But with the midterm elections nearing — and potential ACA premium increases next month ahead of the midterms — the prospect for legislating on climate change in this Congress is all but dead.

It’s a stinging defeat for climate activists and Democrats who watched the last major congressional effort to legislate on climate change die in the Senate in 2010.

“The problem was that we continued to talk to Manchin like he was serious. He was not,” Sanders said. “This is a guy who is a major recipient of fossil fuel money, a guy who has received campaign contributions from 25 Republican billionaires.”

Democrats are left with few remaining options. Some want to continue negotiating for a bigger legislative deal in the next two months, and most are calling for more robust executive action on climate from the Biden administration. Others are holding out slim hopes of simply electing more Democrats to pass a climate bill in the midterms.

“If the Senate will not move to tackle the climate crisis and strengthen our domestic clean energy industry, I will take strong executive action to meet this moment,” Biden said in a statement last week (E&E News PM, July 15). “My actions will create jobs, improve our energy security, bolster domestic manufacturing and supply chains, protect us from oil and gas price hikes in the future, and address climate change.”

It’s not entirely clear yet what that would entail. Biden has pledged to slash U.S. emissions 50 to 52 percent by 2030 compared to 2005 levels, and the clean energy provisions under negotiation were seen a crucial policy to get there.

For now, Senate Majority Leader Chuck Schumer (D-N.Y.) is preparing to move ahead with the narrow drug pricing deal this week, POLITICO reported, sending it to the parliamentarian for review.

Negotiations on the bipartisan innovation and competition bill have gotten tied up with reconciliation after Senate Minority Leader Mitch McConnell (R-Ky.) threatened to kill it should Democrats move forward on their social spending package.

The Senate is set to move ahead with a slimmed down version — centered on $52 billion for the semiconductor industry — this week, but it’s unclear what the package might look like.

Sen. John Cornyn (R-Texas), who is close to McConnell, tweeted that the demise of the Democrats’ broad budget reconciliation effort with climate spending and new taxes would pave the way for bipartisan action on innovation.

Still, the atmosphere on Capitol Hill remains tense. Many Democrats are bitterly disappointed and distrustful of Manchin, who whittled away at their climate policy options for months before sinking them entirely last week. Progressives, in particular, viewed climate legislation as a key selling point to younger voters ahead of the midterms.

“We’re going to have to get two more Democrats, real Democrats [in the Senate], who will actually help us to implement the president’s agenda, not obstruct it,” Jayapal told reporters.

Key House committee chairs, however, said last week they would be willing to continue waiting it out until September if it meant they could secure a broader deal.

“If he’s leaving a gap in the door, then that’s the way it is,” said House Natural Resources Chair Raúl Grijalva (D-Ariz.).

Ways and Means Chair Richard Neal (D-Mass.) similarly noted that House lawmakers have spent a lot of political capital negotiating and working on a framework for a larger deal over the last year.

“I want to believe, for the purpose of getting a big deal, that [Manchin] wants to act in good faith,” Neal told reporters.

Despite the fact that talks have fallen apart multiple times over the last year, “it’s never a bad deal to try and reengage,” said House Budget Chair John Yarmuth (D-Ky.).

Many environmental groups have essentially written Manchin off and even called for him to be removed as chair of the Energy and Natural Resources Committee.

But Tiernan Sittenfeld, senior vice president for government affairs at the League of Conservation Voters, said she’s not giving up on a legislative deal quite yet.

“The Senate is not supposed to go out for August recess for three weeks,” Sittenfeld said Friday at a news conference on Capitol Hill. “That is plenty of time for Sen. Manchin to come back to the table today, right now, and get this bill passed before they go out on their August recess.”

The focus for many Democrats now is on the executive branch, where Biden still has power to stiffen emissions regulations and halt new fossil fuel projects.

Top of the mind for progressives is declaring a climate emergency. Many Democrats have called for Biden to do it for years now, and now they see an obvious opening because Biden no longer has to walk a delicate line to please Manchin.

As Rep. Jared Huffman (D-Calif.) put it, Biden should “open the full suite of emergency authorities to do big things on the clean energy transition.”

It would offer the administration authority to support lawsuits against the fossil fuel industry and accelerate things like heat pump manufacturing and the transition of the federal fleet to electric vehicles, Huffman said.

“We’re not powerless, and I think it’s important to make that distinction,” Huffman said. “Nobody is surrendering here. Nobody is putting up the white flag and saying, ‘Joe Manchin wins,’ but it is time to change tactics.”

Sen. Sheldon Whitehouse (D-R.I.) offered up a ten-point plan for executive action. It includes buffing up the federal social cost of carbon, requiring all major emitters to install carbon capture, using the bully pulpit to call out corporations who obstruct climate action and limiting co-pollutants from fossil fuel power plants.

Still, gas price politics remain a factor. The Biden administration — and many moderate Democrats — are wary of the optics of any move that could be seen as exacerbating high energy prices with the midterms around the corner.

The Manchin news last week, for instance, came as Biden was in oil-rich Saudi Arabia, where the president said he was “doing all I can to increase the supply for the United States of America.”

And the reality is that executive action would be fundamentally limited in scope without Congress pumping big money into the deployment of new and existing clean energy technology.

“I’m not there yet. I think some stuff you have to do through legislation,” Rep. Scott Peters (D-Calif.) said in an interview. “I wouldn’t want to suggest this is something you can’t backfill with executive action — you can — but this is something we will not have the opportunity to do again.”

“It’s clear that there needs to be swift progress on all fronts of government if the US is going to get on track to achieving the target. This means that Congress, the Biden administration, and states all need to accelerate progress this year towards closing the emissions gap,” researchers at the Rhodium Group wrote this month. “If any front fails to act, it will be increasingly difficult to see a reasonable path to the 2030 climate target.”

With current policy trajectories, the Rhodium Group found the United States is on track to cut emissions 24 percent to 25 percent below 2005 levels in 2030. That’s well under Biden’s promise under the Paris agreements to halve emissions by 2030.

“I don’t know,” he told reporters Friday when asked what executive action the administration should take. “It’s something you can’t delay, and you can’t hide it with smoke and mirrors. Essentially, no action and the crisis gets worse.”

With little legislative recourse left, Democrats on Capitol Hill have largely been left to fume at Manchin and unleash months of pent-up frustration.

And even if some want to hold out for the broader deal, Manchin has repeatedly called for delays and slimmer spending since Democrats began talking about a reconciliation bill last year.

In September of last year, the West Virginia Democrat called for a “strategic pause” and said he would not support the original proposed price tag of $3.5 trillion.

As negotiations continued, Manchin ruled out the so-called Clean Electricity Performance Program — once the centerpiece of the bill’s climate provisions — and took issue with electric vehicle incentives and the fee on methane emissions. He eventually sunk the entire effort in December amid increasing inflation fears.

When Schumer and Manchin began talking again this year, discussions centered around a much smaller package with some $500 billion in spending and $1 trillion in revenues.

Adding to the current Democratic frustration is the fact that the pair were close to a deal on the climate provisions, according to staffers familiar with the negotiations and Democratic lawmakers. Manchin himself said Friday that climate talks had been headed in a “very, very productive” direction.

The House-passed version of the “Build Back Better Act” contained $555 billion in climate spending. In the latest round of talks, Schumer had agreed to slash that to $375 billion to secure Manchin’s support, according to a Democrat briefed on the matter.

“Sen. Schumer will have to decide whether he wants to continue this tease with Joe Manchin, but I think we should stop empowering this guy to be his own branch of government,” Huffman said. “And if you care about climate in particular, it’s time to just accept that he’s going to screw us every single time.”

Manchin, for his part, said he had simply told Schumer he supports much of the clean energy package but could not move on it immediately while inflation is at 9.1 percent.

“He took that as ‘no,’ I guess, and came out with this big thing last night. I don’t know why they did that, I guess to try to put pressure on me, but they’ve been doing that for over a year now,” Manchin told Hoppy Kercheval of West Virginia MetroNews on Friday.

However, since last year, Manchin has gone from from supporting the climate portion of the reconciliation package to questioning its price tag, its provisions and its very purpose. Manchin has expressed concerns about the minerals needed for clean energy and said the transition to renewables is already happening.

But Manchin’s view, Schumer’s move “doesn’t make any sense at all.”