Dems know it’s warming but not how to fix it 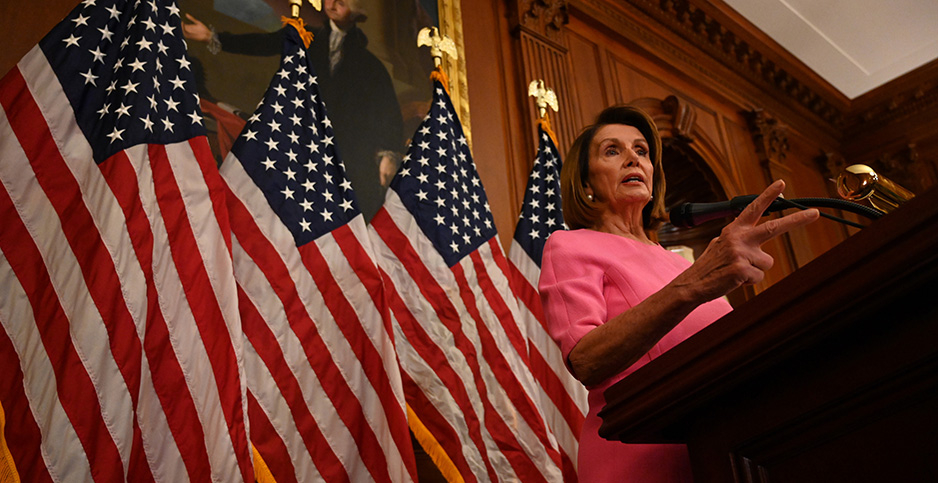 House Minority Leader Nancy Pelosi (D-Calif.), who is seeking to regain the House speaker gavel, wants to restart a select committee on global warming. The plan has revealed divisions among Democrats on what to do to address climate change. Pat Benic/UPI/Newscom

Climate change is the first big fight for congressional Democrats as they prepare to take control of the House next year. It’s fracturing the party along fault lines of turf, strategy and age.

At issue is which lawmakers should lead the way, as well as the scope of potential legislation. How the intraparty feud plays out could foreshadow the aggressiveness with which House Democrats try to tackle climate change over the next two years, a critical period that will shape the party’s positions on the environment as it tries to rip the White House away from President Trump.

Over the next six weeks, the battle could also impact the power struggle over party leadership, including Minority Leader Nancy Pelosi’s (D-Calif.) bid to reprise her role as speaker.

"There is not one group or caucus that has enough votes to hijack everything," said Rep. Kathleen Rice (D-N.Y.).

She said House Democrats aren’t unified on a single climate policy because there are multiple constituencies pushing different priorities. All of them, she added, are fighting for position right now.

"What you’re going to see is what I hope is a robust discussion about what direction we go in," said Rice, one of several Democrats who want someone other than Pelosi to become speaker.

One climate activist had a different take.

The first sign of friction arrived on Congress’ first day back after Election Day, when newly elected Rep. Alexandria Ocasio-Cortez (D-N.Y.) joined protesters outside Pelosi’s office to demand a new approach to a warming planet.

Specifically, they wanted her to support the creation of a committee that would draw up plans for a "Green New Deal" — in essence, a new government jobs program that would invest heavily in sectors such as renewable energy.

What’s more, they want to limit membership in the proposed committee to lawmakers who don’t take contributions from the fossil fuel industry. Some protesters said they’d like to apply that same restriction to the next slate of House Democratic leaders — a major ask for a party still struggling to figure out how it wants to handle the oil and gas sector.

In response to the demands, Pelosi floated the idea of a different kind of climate change committee — one based on a panel that Democrats created the last time they were in control of the House. "I have recommended to my House Democratic colleagues that we reinstate the select committee to address the climate crisis," she said Tuesday in a statement.

The proposal was criticized almost immediately. Critics on the left saw it as a toothless gesture that wouldn’t lead to anything. At the same time, establishment Democrats saw it as an attack on their jurisdiction. Rep. Frank Pallone (D-N.J.), who’s in line to lead the Energy and Commerce Committee, has laid claim to climate change as an issue.

"We got a lot of people on the committees that are real champions, so I don’t think it’s necessary," Pallone said earlier this week of the select committee.

The divide can be broken down roughly into four camps: those with Pelosi and her idea of bringing back the select committee; those with Ocasio-Cortez and her plan of focusing the panel on a Green New Deal and limiting its membership to fossil fuel opponents; those with Pallone and his preference to keep the committee structure as it is; and then finally those Democrats who haven’t publicly made up their mind — fence-sitters who are waiting, perhaps, for the broader leadership fight to shake out.

Incoming Rep. Joe Neguse (D-Colo.) said he supports the idea of giving climate change its own committee, though he was open-minded about its focus — so long as House Democrats use it to develop far-reaching solutions.

Climate change is a "crisis of epic proportions, and it merits an epic response on the part of the federal government," he said. "It should be big, it should be bold, it should be comprehensive."

One major question is how quickly House Democrats want to attack the problem of rising temperatures legislatively, given that Republicans will maintain control of both the Senate and the White House and can stymie any bill that leans too far to the left.

New members, such as Ocasio-Cortez, who want the party to put forward bolder ideas on climate have support from Rep. Raúl Grijalva (D-Ariz.), who plans to use his position as the presumed head of the Natural Resources Committee to lead on the issue.

"I would agree with some of their criticism — I think we’re baby-stepping it," he said. "I can understand us doing some incremental stuff, but I think fight No. 1 is to elevate the discussion of science up. That’s going to be our first task sending out our own directives about the impacts of climate change on public lands, what’s going on, because it’s been dumbed down by this administration and in fact denied."

In private, there’s a sense among some Democrats that the party should wait until after the 2020 elections to be more forceful.

Related to that worry is the idea that Democratic leadership shouldn’t vote on ambitious climate bills that likely won’t pass the Senate because it could force its members in more conservative, fossil-fuel-friendly districts to take tough votes.

A number of Democratic operatives and congressional staffers privately acknowledged this week that the party doesn’t have an off-the-shelf policy it needs on climate right now.

Many Democrats were reluctant to speak on the record because they didn’t want to highlight intraparty squabbles. But they pointed to Pelosi’s significant track record on climate, which includes passing the Waxman-Markey bill, a cap-and-trade system that would have significantly cut greenhouse gas emissions if it had not stalled in the Senate.

They argued that the current climate fight was essentially a proxy for the struggle over the soul of the party, with new members jockeying for a way to make their name on an issue that’s important to younger voters.

"It’s not going to change anything I do," said Rep. Eddie Bernice Johnson (D-Texas), who is expected to head the Science, Space and Technology Committee.

Johnson, along with the heads of the Natural Resources and Energy and Commerce committees, pledged to hold two days of hearings on climate science as soon as the 116th Congress is seated in January. The announcement was seen by some Democrats as a rebuke to Pelosi’s notion that a select committee would take over their work in going after the Trump administration on climate policy.

For now, Johnson and Pallone have the backing of Rep. Steny Hoyer (D-Md.), who appears to have locked up the votes to become the next majority leader, the No. 2 spot in House leadership.

"I know that [Minority] Leader Pelosi has talked about a special task force, which we had before," Hoyer said. But "I’ve talked to Mr. Pallone about it — he believes that they can handle it and want to handle it and are enthusiastic about that — I think that can be done through the committee."

Meanwhile, green groups are getting restless.

The Sunrise Movement, which organized the protest in Pelosi’s office, criticized Pallone for not supporting Ocasio-Cortez and her plan to have a select committee on the Green New Deal, which seeks to shift the nation away from fossil fuels and toward renewables.

"If he’s our champion, we’re fucked," the group tweeted, working in a reference to Ariana Grande’s new breakup song: "thank u, next."

Now, two months before House Democrats assume power, the party remains split on the best way to handle climate change in the next Congress — despite a general agreement that global warming poses an existential threat.

"We’re fighting over what to do with power we don’t have," said one congressional staffer.