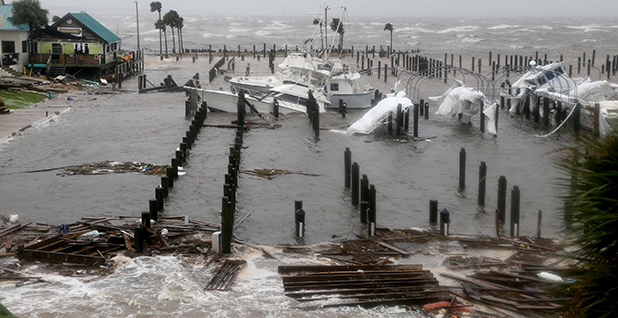 Senate Democrats predicted yesterday that climate change would become a "supercharged" issue at the ballot box in November, as Hurricane Michael wreaked havoc on the Gulf Coast shortly after an international group of scientists issued a dire warning about rising temperatures across the planet.

The report issued earlier this week by the U.N. Intergovernmental Panel on Climate Change offers a bleak outlook if greenhouse gas emissions aren’t curbed in the next decade and if warming spikes above 1.5 degrees Celsius over preindustrial levels.

Just a few days later, Michael made landfall as a Category 4 hurricane, bringing storm surge and 155 mph winds to the Florida Panhandle.

"We’ve had lots of warnings about the dangers of climate change, but this most recent U.N. report is like the big scream," Sen. Chris Van Hollen (D-Md.) said on a call with reporters yesterday.

Democrats are hoping that the foreboding nature of the report, combined with the noticeable effect more intense storms can have on individual communities, will drive people to the polls to vote out Republican candidates who often downplay or outright deny climate change.

"This issue is on the ballot," said Sen. Ed Markey (D-Mass.). "People are going to vote on it, young people especially."

Schumer’s comments on the floor and to reporters are more often focused on health care and President Trump’s controversies, two issues Democrats see as being at the top of the list for their base headed into the midterms.

"While we’re thinking about the people of Florida and Georgia and South Carolina and North Carolina, and everyone in Hurricane Michael’s path, let’s remember we are running out of time to do something about climate change, and the kinds of storms we are seeing now will only increase if this body continues to keep its head in the sand," Schumer said before pivoting to talk about health care.

Sen. Ron Wyden (D-Ore.) added that younger voters want to see something besides lawmakers "throwing fruit at each other" on climate science on Capitol Hill.

"I think particularly young people are interested in hard, objective, scientific facts," Wyden said. "They see very often that kind of is an afterthought in the debates going on in Washington, D.C., and I think they’ll respond positively."

On the press call yesterday, League of Conservation Voters President Gene Karpinski pointed to the Senate races in Florida, Nevada and Arizona as places where climate change could be "sharpened" as a political issue in the wake of natural disaster and the IPCC report. LCV’s political action committee has thrown its weight behind candidates in all three states.

The group, for example, has panned Florida Gov. Rick Scott — in a tight race against Democratic Sen. Bill Nelson — for his handling of the state’s algae blooms in a partnership with American Bridge (E&E News PM, Sept. 6).

Nelson, for his part, laid blame for Michael’s widespread devastation on climate change during an appearance on CNN yesterday.

"The Gulf of Mexico was 4 degrees hotter than is usual," Nelson said. "Listen to the scientists … and they’ll tell you that the Earth is heating up and the ferociousness of these storms is as a result, in part, of that heating up."

LCV has also run ads against Republican Sen. Dean Heller in Nevada and is backing Democratic Rep. Kyrsten Sinema for Senate in Arizona.

All told, it plans to spend $25 million backing Democrats for the House and Senate and touting their credentials on climate change and the environment, and green groups are hoping the events of the past week will magnify their efforts.

Climate change will also get a more direct referendum in Washington state, where environmental groups and the oil industry have both spent millions of dollars on opposing sides of a carbon fee ballot initiative (Climatewire, Aug. 23).

But the easiest way to make it an issue would be to make acting EPA Administrator Andrew Wheeler and other environment and energy officials in the Trump administration "famous" through oversight hearings, Markey said.

"There’s no question that the whole dynamic changes just because the hearings are conducted in a way that reflects respect for the science," he said.

In the more immediate future, Congress may have to consider a supplemental package of disaster aid for victims of Michael, which has prompted emergency declarations as far north as Virginia.

"This is going to take a lot of money and a lot of time to sort of rebuild, and obviously the federal government is going to have to be a big part of it," Rubio said, who added that he planned to visit Federal Emergency Management Agency headquarters before flying to northwest Florida to view the damage firsthand.

Rebuilding "will be expensive because it will be rebuilt to the new code that we have in Florida post-Andrew, which is costlier, safer, but costlier than some buildings that might have been grandfathered in," he said.

Rubio added that it will be a "multiyear recovery effort," including possibly rebuilding the electric grid around Panama City.

Sen. Richard Burr (R-N.C.) said he was awaiting word on Michael’s impact on his state, which is still recovering from last month’s Hurricane Florence. "I’m more worried about power outages," he told E&E News yesterday afternoon. "Just the wind and the trees."

House Appropriations Chairman Rodney Frelinghuysen (R-N.J.) said in a statement yesterday that FEMA "has sufficient funds for immediate disaster response" but that his panel would be prepared to put together additional money quickly.

Senate Appropriations Chairman Richard Shelby (R-Ala.), meanwhile, said he had not heard from the White House or FEMA on any funding needs associated with the storm.

But he raised the possibility of packaging disaster relief with the remaining appropriations measures in the lame-duck session. That could attract enough votes for a potentially controversial package that could also include money for Trump’s border wall.

"They seem to be on top of things, but they’ll probably need more money down the road," Shelby said of FEMA. "The Carolinas are getting hit again, which is a double whammy."