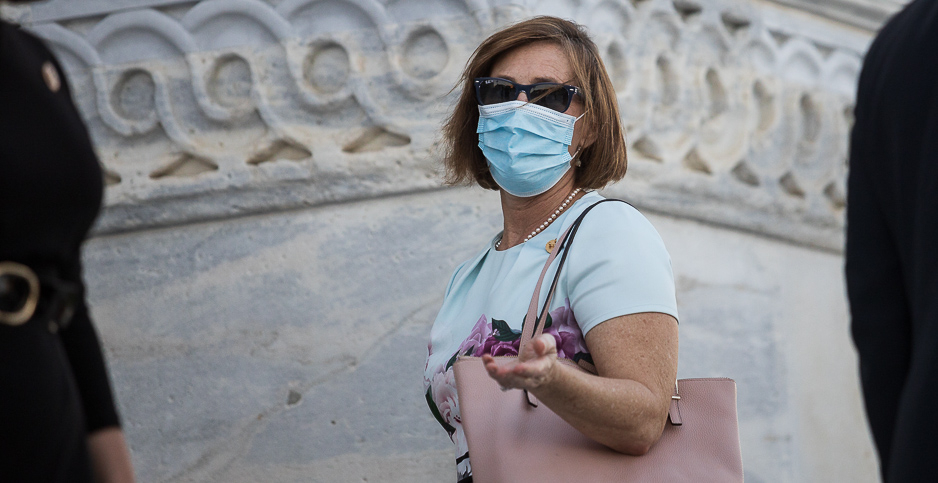 The House Select Committee on the Climate Crisis will call on Congress today to get the United States to net-zero greenhouse gas emissions by 2050 and slash pollution in communities afflicted by environmental injustice.

The 538-page "Climate Crisis Action Plan" will recommend policies aimed at achieving zero-carbon energy and green transportation, including a clean power standard for electric utilities, a price on carbon and a zero-emissions vehicle standard.

"Working together, we will avert the worst impacts of the climate emergency and build a stronger, healthier, and fairer America for everyone," the report says.

"The Climate Crisis Action Plan outlined in this report provides a roadmap for Congress to build a prosperous, clean energy economy that values workers, advances environmental justice, and is prepared to meet the challenges of the climate crisis."

Committee Democrats will release the majority staff report at a press conference this morning with House Speaker Nancy Pelosi (D-Calif.).

It will endorse setting a clean energy standard that would get to net zero by 2040, while the transportation sector would get a technology-neutral zero-emissions vehicle standard.

Also in the package is a National Climate Adaptation Program to help states, tribes and localities prepare for the effects of climate change and a proposal for launching the "Climate Resilience Service Corps."

Throughout the report is an emphasis on achieving environmental justice and fighting racial inequality.

The report will recommend prioritizing environmental justice communities for investments in clean energy infrastructure and creating a strategic plan to help vulnerable communities respond to climate-related disasters and health risks.

Environmental justice is a pressing concern amid nationwide racial injustice protests and the COVID-19 pandemic, which has disproportionately affected people of color.

The House passed its last major climate bill — the "American Clean Energy and Security Act" — in 2009, and it’s unlikely to move on most of the big ideas in the report this year.

For one thing, committee Republicans say they have not seen the report and were not involved in writing it.

Although they may support some of the adaptation policies in the document, Republicans on both sides of the Capitol are likely to oppose the big-ticket ideas to reduce greenhouse gas emissions.

House Democrats are looking to pass this week a massive, $1.5 trillion infrastructure package that includes many policies laid out in the select committee report, but that measure is widely seen as partisan messaging that stands no chance in the Republican-led Senate.

The White House has already issued a statement opposing that bill, arguing that it is chock-full of "wasteful ‘Green New Deal’ initiatives."

Today’s report will likely serve as a template for a major climate legislation bill should Democrats win the Senate and White House in November.

But it’s unlikely to be a unifying force as Democrats face intraparty battles over climate policy between progressives and moderates. It doesn’t, for example, recommend banning new fossil fuel leases on public lands, a longtime goal for progressive environmentalists.

Instead, select committee Democrats say Congress should pass H.R. 5435, the climate bill from Natural Resources Chairman Raúl Grijalva (D-Ariz.) that would aim to reach net-zero emissions from public lands by 2040.

Brett Hartl, government affairs director at the nonprofit Center for Biological Diversity, also noted that the national net-zero goal laid out in the report would look to the executive branch to set interim emissions goals in 2030 and 2040.

That’s a potential sticking point for progressives because it opens the door to industry lawsuits and long delays at EPA, Hartl said.

While the report will inevitably have offerings that progressives like — or that they came up with — Hartl said what he’s seen so far has left him looking for more.

"I hope it does at least reject some of the false, really bad ideas from the last round of this when the Democrats were in charge," Hartl said.

The report does recommend a price on carbon, but, in a nod to progressives, it says that the policy is "not a silver bullet and should complement a suite of policies to achieve deep pollution reductions and strengthen community resilience to climate impacts."

It also specifies that "Congress should not offer liability relief or nullify Clean Air Act authorities or other existing statutory duties to cut pollution in exchange for a carbon price."

If all the recommendations were enacted, they would offer $8 trillion in climate benefits through 2050, she told the caucus, citing an independent evaluation of the report by the think tank Energy Innovation.

All told, they could help avoid roughly 62,000 premature deaths each year, the analysis found.

"Confronting the climate crisis requires action across sectors and at all levels of government," the report says.

"The recommendations made by the majority staff of the Select Committee in this report will not only advance federal climate solutions, they will also provide the policy support for tribes, territories, states, and local governments to strengthen communities so that they will thrive in the coming decades."