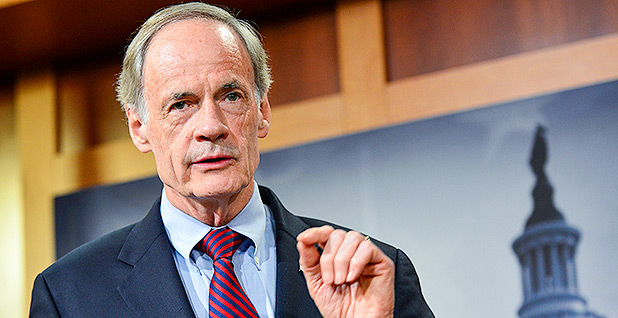 Key Senate Democrats are voicing reservations or outright opposition to a House-passed bill to loosen the Clean Air Act, underscoring doubts about the measure’s chances of becoming law, despite President Trump’s eagerness to roll back environmental regulations.

But a Senate counterpart, S. 263, is becalmed in the Environment and Public Works Committee almost six months after its introduction.

"Oh, I oppose it," Sen. Ben Cardin of Maryland, the committee’s No. 2 Democrat, said in an interview this week. As Maryland officials threaten court action to force EPA to clamp down on ozone-forming pollution allegedly blowing in from other states, "we think it [implementation] should move forward," Cardin said.

Before opting to tighten the standard to 70 parts per billion two years ago, EPA reviewed more than 1,000 studies, Carper said in a statement.

Undercutting "the clear science regarding harmful ozone pollution would be irresponsible and would put countless Americans at risk, including the 6.3 million children in this country who suffer from asthma," he added.

Sen. Kamala Harris (D-Calif.), a freshman EPW member, said she would need to study the bill, but added that "it sounds like something I would not support."

Under Senate rules, strong opposition of a single member is often enough to sink a piece of legislation. Asked for comment, a spokeswoman for Sen. Shelley Moore Capito (R-W.Va.), the lead sponsor of S. 263, said the senator was still working to advance the measure, dubbed the "Ozone Standards Implementation Act," "either as a stand-alone bill or as part of broader legislation."

Two months after a subcommittee hearing, no markup has been scheduled. Although congressional Republicans earlier this year made enthusiastic use of the Congressional Review Act — which allows repeal of recent regulations with only simple majorities in both the House and Senate — to undo rules from EPA and other agencies, they face a more formidable challenge in revisiting older standards that are in some form embedded in federal statutes.

That means changing the law, and in the Senate nowadays, all but routine measures need at least 60 votes to pass. Republicans control only 52.

"If you want to get something signed into law, you really have to work on both sides of the aisle," Rep. Jerry McNerney (D-Calif.) said during last week’s floor debate on H.R. 806, passed with the backing of just four Democrats.

"It is, I think, to both of our losses," Shimkus said.

Ozone, the main ingredient in smog, is linked to asthma attacks in children and worsened breathing problems for people with emphysema and other chronic respiratory diseases. The previous ozone standard, set in 2008, had been 75 ppb.

Then-EPA Administrator Gina McCarthy opted to lower it to 70 ppb in 2015 based on the legal requirement to protect public health in light of available scientific evidence.

But because the agency had only months earlier issued formal implementation guidance for the 2008 benchmark, Capito and other critics argue that states and industries could have to juggle compliance with two standards.

"Ground-level ozone is already declining nationwide due to emissions controls," Capito said at the subcommittee hearing on her bill (E&E Daily, May 24). "There is no need to rush into implementation of new standards when the trend lines are positive."

The legislation would roll back attainment designations for the 2015 standard, which had been scheduled for this October under the Clean Air Act’s usual timetable, until 2025.

It would also lengthen the cycle for reviewing air quality limits for ozone, lead and four other key pollutants in the future from once every five years to once every decade.

Similar legislation also passed the House last year, only to die in the Senate following Democratic opposition and an Obama administration veto threat.

While President Trump would likely sign this year’s version if given the opportunity, there’s no sign that the bill has picked up any momentum at a result.

At the American Lung Association, a leading foe, "I think we’re in a strong position" to block a stand-alone bill from moving forward, Paul Billings, the organization’s senior vice president for advocacy, said in an interview.

The association is nonetheless on guard for policy riders that would wrap some of the legislation’s provisions into other must-pass measures, he said.

The House inserted a similar rider during last year’s appropriations cycle, but the provision was dropped from the version that became law.

The Trump administration is meanwhile acting on its own. Last month, EPA Administrator Scott Pruitt delayed the ozone attainment designations until October 2018, citing a Clean Air Act waiver that allows for a year’s postponement when more information is needed. Public health and environmental advocacy groups are suing to overturn that decision.

The administration’s move to review its underlying position on the 2015 ozone standard has also alarmed California, Delaware and five other Democratic-led states.

They have asked the U.S. Court of Appeals for the District of Columbia Circuit for permission to intervene in lawsuits challenging the standard on the presumption that EPA may no longer be willing to defend it. The court has not yet ruled on that motion.