Dems plan to ‘beat the drum’ on environmental justice 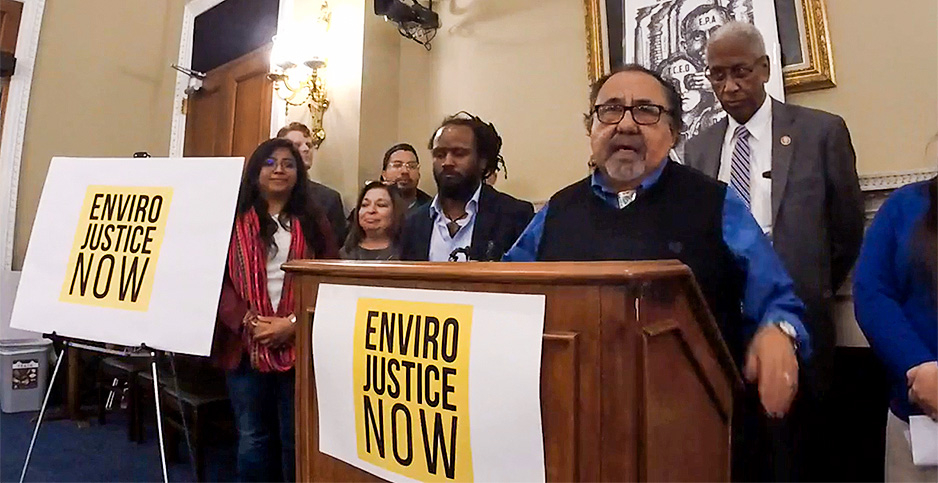 Democrats plan to make environmental justice a centerpiece of their climate and energy agenda in the 117th Congress, with legislative efforts already in the works to overhaul foundational environmental laws and enshrine the Biden administration’s efforts to tackle environmental inequities.

The push could begin in earnest with the upcoming reintroduction of the "Environmental Justice for All Act," a sweeping legislative package to protect vulnerable communities written during the previous Congress with input from activists.

It’s arguably the most ambitious environmental justice legislation ever championed in Congress, and its sponsors are hoping it sways the debate, as Democrats and the Biden administration suggest they will shift to addressing climate change once they pass a COVID-19 relief bill.

While environmental justice long ran in the background of the larger green movement, it has emerged as a major issue on Capitol Hill and in the advocacy community over the last two years, particularly after the flurry of protests that followed the spate of police killings of Black Americans in the late spring and early summer, including the death of George Floyd.

Now, Democrats have an amenable administration and a political movement behind environmental justice that’s far more powerful than it’s ever been before.

They will, however, have to contend with a closely divided Congress with few moving legislative vehicles that could present the best opportunities for passing environmental justice legislation.

Grijalva said he plans to kick-start the process by holding hearings on his bill — both on Capitol Hill and in communities around the country — as he did last year.

At the same time, Grijalva suggested that the political power shifts in Washington have changed the strategy for moving the environmental justice agenda forward.

Last year, he and others were pushing the measure as a largely symbolic gesture, given the Senate Republican majority and the GOP White House unwilling to engage on the issue.

Grijalva now sees an administration eager to get involved in the cause of environmental justice alongside a newly unified Democratic Congress, citing Vice President Kamala Harris in particular as a potentially influential voice at the highest levels of government.

As a senator from California, Harris sponsored several pieces of green equity legislation, including the Senate version of the "Environmental Justice for All Act."

President Biden last week signed an executive order that, among other things, emphasizes environmental justice across the federal agencies and directs 40% of the government’s climate change spending to disadvantaged communities (Greenwire, Jan. 28).

McEachin, the bill’s other architect, said the orders — which among other things created a centralized environmental justice working group inside the new Biden administration — can be "complementary" to efforts on Capitol Hill.

"The executive orders are very encouraging and will go a long way to give aid and assistance to those communities and highlight the challenges those communities go through," McEachin said in an interview. "But that doesn’t obviate the need for the ‘Environmental Justice for All Act.’"

Grijalva told E&E News that he and others, like McEachin, are in "the process" of assessing the overlap between congressional action on the "Environmental Justice for All Act" and the initiatives Biden was pursuing at the executive level.

"We’ll continue to rally members and organizations" around his bill, Grijalva said, "and then get into some serious conversations with Biden about what those other things mean, and if they are effectively dealing with the intention of McEachin and I, and all those groups working on our legislation, great. Perfect."

The legislation has prominent supporters in the Senate. However, this chamber could be the more difficult venue for advancing environmental justice, with Republicans in control of 50 votes and the ability to filibuster legislation still intact.

A bill provision that would allow private citizens in environmental justice communities to seek redress for discrimination under Title VI of the Civil Rights Act, and another that would require permitting decisions under the Clean Water Act and Clean Air Act to account for the "cumulative impacts" of harmful emissions, could prove particularly sticky.

At a hearing on the bill in the House Natural Resources Committee last fall, Republicans were also incredulous about elements of the proposal that would impose new environmental regulations and pick winners and losers in the energy sector.

McEachin pointed out that environmental justice communities are in all 50 states, and there’s no reason why Republicans should be opposed to helping their own constituents.

"They all can benefit from the ‘EJ for All Act,’ so we hope that the Republicans will work with us," McEachin said. "If not, we’ll have to see if there’s some other way to work the bill through the Senate, but right now, I’m optimistic."

Duckworth, who sits on the EPW Committee, said she wants to push the Senate to move quickly on the legislation. She also got EPA administrator nominee Michael Regan to commit to providing technical assistance on the bill through the agency during his confirmation hearing this week.

"With environmental justice allies like Joe Biden and Kamala Harris now in the White House and already taking executive action to promote environmental justice, it’s time for the new Democratic majority in the Senate to act swiftly to help make sure that every American has the right to breathe safe air, drink clean water and live on uncontaminated land, regardless of their zip code, the size of their wallet or the color of their skin," Duckworth said in a statement to E&E News.

There are also myriad provisions in the legislation that would authorize grant programs to direct spending to EJ communities and to make outdoor recreation more accessible.

Those could easily move forward in a larger infrastructure or economic relief package, even if Republicans won’t go for additions to environmental laws, said Collin O’Mara, president of the National Wildlife Federation, which has supported the legislation.

"I think there’s a huge role for the bill to be part of the infrastructure and recovery conversation," O’Mara said.

Grijalva said he’s open to seeing elements of his bill enacted administratively or included in other must-pass legislative vehicles.

"Whatever way we can get it done," he said. "We’re including the administration as part and parcel. We want their reaction to the legislation."

But Grijalva didn’t rule out taking a more aggressive posture if he feels he has to, by which he meant scheduling a markup on the stand-alone bill notwithstanding other action or lack thereof.

"It will be good to coordinate" with the White House, said Grijalva, "but I think at some point, a markup is going to be required."

Grijalva added that he is prepared for a fight. He predicted that the "cumulative impact" requirements in the legislation could become one of the biggest sticking points to potentially be hammered out in the House Energy and Commerce Committee, which has shared jurisdiction over the bill.

"You don’t just measure where this particular plant’s emissions are going to add to air quality, water quality — you do a cumulative thing," Grijalva said.

"So if you’re on ‘Cancer Alley’ and there’s 82 petrochemical plants, the last one may not in and of itself be the one, but if it has the cumulative effect of all of them, it’s problematic to continue to add plants."

How, exactly, the bill would go over on the E&C dais also remains an open question. Several members of the Energy panel, including McEachin, were co-sponsors in the previous Congress, but full committee Chairman Frank Pallone (D-N.J.) and Environment and Climate Change Subcommittee Chairman Paul Tonko (D-N.Y.) did not sign on. A spokeswoman for the committee did not return a request for comment.

But McEachin said that although he hasn’t talked to Pallone about the "Environmental Justice for All Act" recently, the legislation has plenty of supporters on the E&C roster. Pallone and Tonko have also been eager to work on environmental justice, having held their own hearings on the topic during the last Congress.

"I know the committee is interested in taking up the bill," McEachin said.

Meanwhile, back in the Senate, Grijalva’s direct Democratic counterpart — Energy and Natural Resources Chairman Joe Manchin of West Virginia — is not expected to lead on environmental justice with the same level of attention, despite the panel having some jurisdiction over the "Environmental Justice for All Act."

A Manchin aide did tell E&E News that the senator’s interest in pursuing legislation to bolster a clean energy workforce agenda could be applicable to broader environmental justice and conservation efforts.

Whether or not the "Environmental Justice for All Act" passes in full, the issue isn’t going away anytime soon.

Environmental justice was a frequent topic during Regan’s confirmation hearing on Wednesday among senators from both sides of the aisle.

"I’m proud to say that President Biden has made environmental justice a centerpiece of this administration," Regan said.

There are also a number of other environmental justice proposals floating around Capitol Hill that have drawn significant attention from the advocacy community.

Off Capitol Hill, lawmakers and advocates said there is unprecedented grassroots energy on environmental justice, particularly because the "Environmental Justice for All Act" was written with input from community activists.

"This is just the beginning, if you will," Michele Roberts of the Environmental Justice Health Alliance for Chemical Policy Reform said during an event this week with the League of Conservation Voters.

"What we can really anticipate," Roberts said, "is our folks taking this language and legislation and energy to the streets."