Dems poised to elect ‘fighter’ on the environment 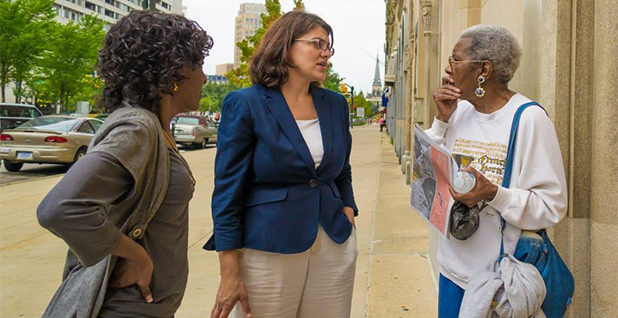 Five years ago, mounds of petroleum processing waste piled up along the Detroit River. Black grit routinely blew off the open-air heaps, and Detroit residents found it coating their cars and homes.

A company owned by petrochemical billionaire brothers Charles and David Koch was storing the petcoke, refuse from an oil refining process known as coking, before shipping it overseas where it is burned as fuel.

Concerned constituents called their state representative, Rashida Tlaib, who is now running for the House seat once occupied by John Conyers. The episode has helped define her career.

Unsatisfied by the response from the state environmental agency, which declared no health risks, Tlaib gathered samples of the industrial waste herself and gave them to a local environmental group for testing. It found traces of heavy metals selenium and vanadium.

She rallied to her cause then-Rep. Gary Peters (D), who brought up Detroit’s petcoke problem in a House debate on the Keystone XL pipeline, urging — unsuccessfully — a study on the health and environmental impacts of oil processing. Detroit’s petcoke resulted from refining Canadian oil sands crude.

Peters and Tlaib warned that the pipeline would mean more U.S. cities like Detroit accepting the oil refinery waste.

"What is really, really disturbing to me is how some companies treat the city of Detroit as a dumping ground," she told The New York Times in 2013.

Tlaib was the point person for a massive community push to remove the black waste piles. And in August 2013, Detroit Mayor Dave Bing ordered all the petcoke removed from the waterfront, citing residents’ concerns.

The Michigan Department of Environmental Quality eventually released a report stating that exposure to petcoke could lead to health issues.

Even in her first term as a state legislator, Tlaib showed a political savvy that yielded results. By taking samples herself, she drew public and media attention to the issue, but she also pressed the DEQ to enforce existing laws, urging the agency to act.

Sarah Roberts, a Democratic state lawmaker at the time, credited Tlaib’s tenacity for the petcoke’s removal. "She is fearless," Roberts said.

Tlaib, 42, graduated with a bachelor’s degree in political science from Wayne State University in 1998. In 2004, she got a law degree from Cooley Law School, which gained attention for being the alma mater of President Trump’s former attorney Michael Cohen.

The oldest of 14 children, Tlaib is now a national name, hailed as part of the Democratic Party’s changing face.

In early August, she won the Democratic nomination for Michigan’s 13th District, which covers Detroit. The seat was held for decades by civil rights legend Conyers, who resigned following sexual harassment allegations.

During her primary bid, Tlaib — like other politicians on the left end of the Democratic spectrum — signed a pledge to accept no fossil fuel industry contributions.

With no Republican running, Tlaib’s path to Capitol Hill is clear. Along with Ilhan Omar of Minnesota, who also lacks a challenger, she will be the first Muslim woman in Congress, as well as the first female Palestinian-American member. Her father was born near Jerusalem and worked at a Ford assembly line.

Tlaib was already the first Muslim woman elected to the Michigan Legislature. Her campaign said it was unable to comment for this story because of an overwhelming number of media requests.

Along with Omar and Alexandria Ocasio-Cortez of New York, Tlaib is one of several young, forceful, progressive women of color set to join the Democratic caucus next year.

All three are favorites of the party’s left flank, staunch supporters of a $15 minimum wage, universal health care and free college education.

Tlaib and Ocasio-Cortez are both members of the Democratic Socialists of America.

But it was Tlaib’s work on environmental justice in Detroit that helped give Tlaib prominence over two terms as a state lawmaker.

"Rashida has shown day in day out that she’s a champion for the environment and the people of Michigan," said Bob Allison, deputy director at the Michigan League of Conservation Voters.

Tlaib’s rising profile means she will speak for and to a large number of progressive voters who share her values, an unusually strong starting point for a new member.

Roberts, the former state lawmaker, said her onetime colleague could have "a tremendous impact in the House" — just as she did in Michigan.

A billionaire businessman and trucking industry tycoon, Moroun owns the company that controls the Ambassador Bridge, an international span connecting Detroit and Canada. It is the sole privately owned border crossing between the two countries.

Moroun wanted to build a second span to his bridge — and began construction on the Detroit side without any permits. The work disrupted low-income communities, and the construction meant a major increase in traffic through Tlaib’s district. More large trucks, combined with construction dust, spawned air quality concerns.

"She felt there was a correlation between the number of large idling trucks in her community and negative impacts on public health," Roberts said.

Moroun and his company have been accused of destroying neighborhoods for the bridge project on both sides of the border, skirting environmental permitting laws and attempting to divert traffic flow near Moroun-owned gas stations and duty-free stores.

In an online letter, Tlaib wrote, "From blighted homes that my boys have to walk by to allowing [Moroun’s] trucks to rumble down our residential streets, passing our parks, schools, and homes — we have had it."

She described an interaction with Moroun himself, telling him he needed to apply for permits.

"I don’t come and tell you what to do in your backyard," she recalled Moroun saying.

"But Mr. Moroun, it is my backyard," Tlaib responded.

The fight over Moroun’s second span continues, but construction has now begun on a different bridge, the publicly owned Gordie Howe International Bridge, despite years of litigation by Moroun to block the project.

Tlaib was instrumental, Roberts said, in calling attention to the issue when Moroun began building without permits and later in fighting for concessions for the community.

And as with the petcoke issue, Tlaib showed herself unafraid of doing things on her own.

In 2011, Moroun illegally fenced off part of a public park underneath the bridge. Tlaib helped organize a cohort of residents who tore it down.

"She’s just a fighter," Roberts recalled, "and she doesn’t give up."