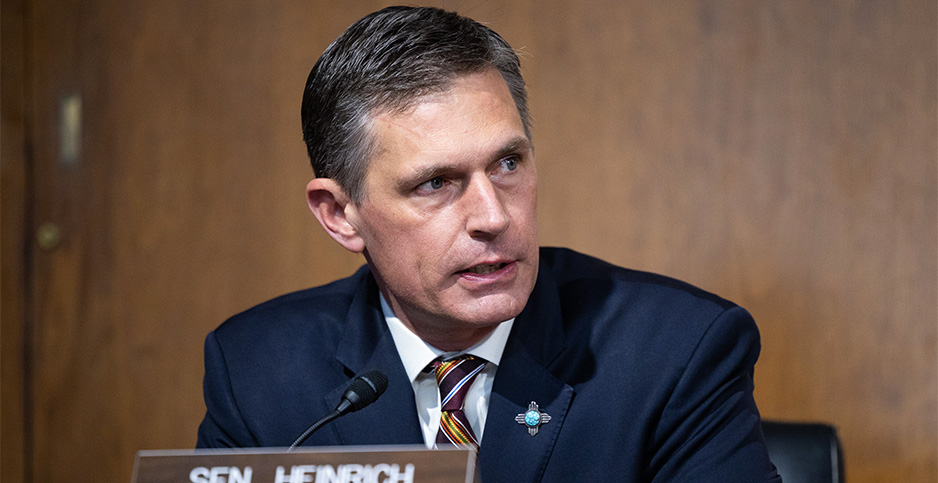 Senate Democrats are moving ahead with plans to use a time-sensitive legislative maneuver to reverse one of the most controversial environmental rollbacks of the Trump administration.

Democratic Sens. Martin Heinrich of New Mexico and Ed Markey of Massachusetts — along with Sen. Angus King, a Maine independent who caucuses with Democrats — today introduced a resolution to reinstate Obama-era regulations on methane emissions from the oil and gas industry, which former President Trump scrapped.

Democratic Reps. Diana DeGette of Colorado, Scott Peters of California and Conor Lamb of Pennsylvania have filed a companion resolution in the House.

This is the first resolution dealing with climate change to be introduced this year under the Congressional Review Act, a law allowing Congress and the White House to quickly repeal a regulation finalized within 60 legislative days, or roughly six months.

The deadline for filing CRA resolutions of disapproval is April 4, and Congress has to approve them by late May.

This morning, Senate Majority Leader Chuck Schumer (D-N.Y.), who has signed on as a co-sponsor, committed to holding a vote on the methane resolution.

"On the health front, we will take aim against the former administration’s decision to roll back limits on methane emissions from oil and gas production — gases that pack a much greater punch than carbon dioxide when it comes to climate," Schumer said in remarks on the Senate floor to kick off the day’s legislative session.

"The Senate will take up a Congressional Review Act measure to reinstate the commonsense regulation of methane emissions to fight climate change," he continued.

The resolution of disapproval will also be considered in the House, the office of Speaker Nancy Pelosi (D-Calif.) confirmed, with the Senate acting first.

A House Democratic aide familiar with discussions separately noted that the resolutions were being introduced "at the request of the White House," as strong an indication as any that Democratic leaders in both chambers are aligned in the effort.

In the Senate, Heinrich predicted Democrats would stand together and vote in favor of the disapproval resolution when it comes to the floor — even moderate Sen. Joe Manchin (D-W.Va.), whom Heinrich characterized as "[not] someone who views waste as a good thing."

Proponents of tightening restrictions on methane emissions say that methane leaks not only present health hazards but also constitute a tremendous waste of valuable energy resources.

Asked whether Republicans would join the effort, Heinrich lamented the death of Sen. John McCain (R-Ariz.), who was one of three Senate Republicans in 2017 to vote against eliminating the Obama Bureau of Land Management’s methane and waste prevention rule, which set limits on methane flaring on federal lands.

The two GOP senators who voted with McCain are still in office: Sens. Lindsey Graham of South Carolina and Susan Collins of Maine. Graham told E&E News he would "think about" whether to support it this time around.

Democrats are expected to move swiftly next month on the methane disapproval resolution, cognizant of both the narrow window to act and the appetite within the party base to take aggressive action on climate change.

"We look forward to working closely with the Biden administration and the Senate to advance this important measure," said Margaret Mulkerrin, a spokesperson for House Majority Leader Steny Hoyer (D-Md.), who controls the House floor schedule.

This is all something of a new posture, however, as there were previously some doubts about whether Democrats thought the CRA was the appropriate and most worthwhile vehicle for undoing Trump environmental rules and regulations (E&E Daily, March 17).

Democrats were also debating whether to commit floor time to consider a resolution under the CRA during a wildly busy moment, with lawmakers rushing to enact early components of President Biden’s legislative agenda following passage of a massive coronavirus relief package.

Deploying the CRA is not even a strategy historically embraced by the progressive base. Only now are liberal Democrats "holding their noses and urging use of technical requirements of the CRA to facilitate ‘quick reversal’ of Trump rules," said Wayne Crews, an expert at the conservative Competitive Enterprise Institute.

That would further the aim of erasing, as Biden calls him, the "former guy," Crews added.

For the past several weeks, progressives had been prodding congressional Democrats to use the CRA before the clock runs out (Greenwire, March 2).

One of these progressives is Amit Narang, an analyst at Public Citizen, who lauded the methane resolutions filed today as "a bold and effective first step in getting EPA back to its mission of fighting climate change."

But not everyone is aligned on the tactic.

James Goodwin, an analyst at the Center for Progressive Reform, has long voiced his outright opposition to the CRA, and last night on Twitter blasted the Democrats’ choice to target the methane rule because it could get struck in court.

There’s also a fear, albeit remote, that using the CRA could backfire and prevent an agency from issuing a new regulation that is "substantially the same."

"While I don’t put much stock in the CRA’s salt-the-earth provision," Goodwin cautioned, "this is one that where if you get a bad Trump judge, it could bite you in the ass."