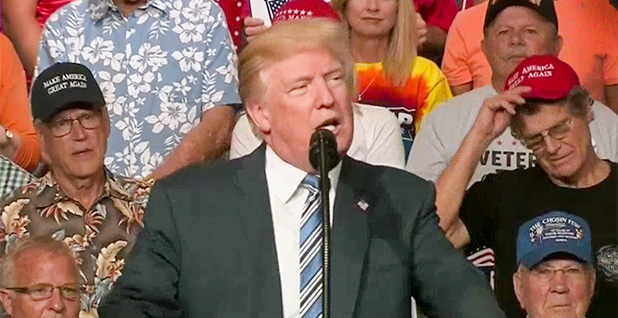 President Trump speaking in West Virginia last year. He will be back in the state today to address the undoing of President Obama's Clean Power Plan. C-SPAN

EPA is set to roll out its Clean Power Plan replacement this morning, and Senate Democrats have been plotting their opposition.

Democrats, though, deem the proposal a handout to fossil fuel interests, particularly the coal industry.

EPA is scheduled at a 10 a.m. press briefing to announce the plan, which it’s calling the Affordable Clean Energy rule.

The Trump proposal would take the "inside the fence line" regulatory approach long sought by the energy industry. Rather than regulating the plants across the electric grid to help speed the transition to renewable energy, as the Obama administration had proposed, President Trump’s EPA would focus on improving individual sources.

"Looks like it got drafted by the fossil fuel industry," said Sen. Sheldon Whitehouse (D-R.I.).

The proposal appears to avoid altering the endangerment finding — EPA’s 2009 determination that greenhouse gases pose a threat to human health — thus steering clear of at least one potential point of controversy.

But Democrats say it would vastly reduce the emissions cuts expected under the CPP and effectively allow states to opt out of regulating emissions.

"This is a huge step backwards in our efforts to address the huge colossus of climate change, which is a clear and present danger," said Sen. Chris Van Hollen (D-Md.). "So this is just another example of Republicans and President Trump putting their heads deeply in the sand."

A group of Senate Democrats will hold a press conference with League of Conservation Voters President Gene Karpinski early this afternoon to issue a rebuttal of EPA’s proposal.

Republicans, meanwhile, attempted yesterday to avoid speculating about a proposal that hadn’t been officially made public.

But, Sen. Dan Sullivan (R-Alaska), who sits on the EPW Committee, said, "If it’s got aspects of federalism that gives power to the states, that’s something I would support."

Trump is expected to tout the proposal at a rally tonight in West Virginia, a coal-reliant state where the politics of the CPP have taken center stage.

The White House has remained tight-lipped about its plans for the rally, but the political messaging is clear.

Manchin’s office confirmed he will not be in attendance with the Senate still in session, but national and state Republicans began unloading on him yesterday, focusing on coal and his support in 2016 for Democratic presidential nominee Hillary Clinton.

The state’s Republican senator, Shelley Moore Capito, will be in attendance tonight, according to her office.

Morrisey, for his part, has taken to blasting Manchin’s record on coal and health care in recent days while doubling down on the president’s support.

"President Trump knows Joe has gotta go! President Trump and I will be in Charleston this Tuesday to discuss the Make America Great Again agenda!" the state attorney general tweeted yesterday.

The White House forwarded questions about the rally — and a potential Clean Power Plan reveal — to Trump’s campaign, which did not respond to requests for comment. Manchin’s re-election campaign also did not immediately respond to questions about Republican attacks.

Still, the campaign rally for Morrisey would be a fitting place for the president to roll out his plan.

Morrisey was a leading figure in the lawsuit that ultimately stayed the Clean Power Plan. And Murray Energy Corp. CEO Bob Murray, one of the biggest critics of the CPP, hosted a fundraiser for Morrisey earlier this summer that was attended by Vice President Mike Pence (Greenwire, July 19).

Colton Henson, a Republican political operative in Ohio and West Virginia, said Morrisey and Republican House candidate Carol Miller, who will also be featured at the rally, "are in tough races, but races that can absolutely be won with the support of President Trump."

But Van Hollen, chairman of the Democratic Senatorial Campaign Committee, said he wasn’t worried about how the rollback will play in the contested West Virginia Senate race.

His focus, he suggested, was on the long view.

"It’s a bad day for the country," Van Hollen said.