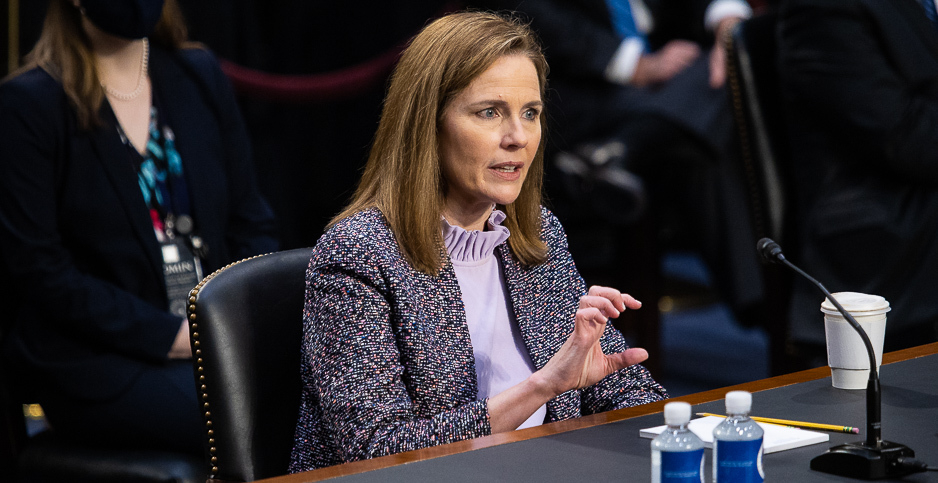 When Sen. Chris Coons arrived for his second day of questioning Supreme Court nominee Amy Coney Barrett, he came prepared with a list of 120 cases that a more deeply conservative high court could work to overturn.

The Delaware Democrat’s blue poster board was marked with the names of cases that were decided by a 5-4 vote in which Justice Ruth Bader Ginsburg, the liberal jurist whom Barrett would replace, was in the majority and Justice Antonin Scalia, the conservative jurist Barrett has called her mentor, was in the dissent. If confirmed, Barrett would be the sixth conservative justice on the bench.

Among the cases on Coons’ list: Massachusetts v. EPA, the landmark 2007 climate case that established that the federal government could regulate greenhouse gas emissions.

Thus began an afternoon of questioning by the Senate Judiciary Committee that brought Barrett’s views on environmental issues — and climate change in particular — into sharper focus.

Vice presidential nominee Sen. Kamala Harris (D-Calif.) and Sen. Richard Blumenthal (D-Conn.) used the third day of Barrett’s hearing to home in on her statement Tuesday that she had no "firm views" on climate change (Climatewire, Oct. 14).

"In response to Senator Blumenthal today, you said, quote, you are not competent to opine on what causes global warming and that you, quote, don’t think your views on global warming or climate change are relevant to the work you do as a judge," said Harris, who cited the impact of climate-induced wildfires in her home state.

"I certainly do believe your views are relevant, and I am very concerned about your statements," Harris continued. "Since Massachusetts v. EPA case, scientific consensus has grown even more and stronger that climate change is real, and it is caused by man-made greenhouse gas pollution, and it poses significant threats to human life."

The senator asked whether Barrett would defer to scientists before handing down judgments.

"If a case comes before me involving environmental regulation, I will certainly apply all applicable law deferring when the law requires me to," said Barrett, who currently sits on the 7th U.S. Circuit Court of Appeals.

"And as I’m sure you know, Senator Harris, the Administrative Procedure Act does require courts to defer to agency fact finding and to agency regulations when they’re supported by substantial evidence," said Barrett.

Harris proceeded to question Barrett on whether COVID-19, the respiratory illness caused by the novel coronavirus, is infectious and whether smoking causes cancer.

Barrett said Harris was posing a series of "completely uncontroversial" questions to draw out a response on a "very contentious matter of public debate."

"Thank you, Judge Barrett," Harris replied, adding: "You’ve made your point clear that you believe it’s a debatable topic."

"I am not against any of those things," said Barrett. "Those are policies that the Congress has pursued in many statutes, and I think we all reap the benefits of when those statutes work."

Barrett’s equivocating has caused frustration for environmental groups and climate experts, who say the issue is a crucial consideration for jurists as the courts are poised to hear an increasing number of emissions-related cases in the coming decades.

Sen. Tom Carper (D-Del.), who is not a member of the Judiciary Committee, tweeted yesterday that it would be "dangerous" to install Barrett on the court — an outcome that Democrats appear powerless to stop.

"You don’t have to be a scientist to trust scientists," Carper wrote. "The #ClimateCrisis is real. And right now, our action — or inaction — will determine the very future of our planet."

You don’t have to be a scientist to trust scientists.

The #ClimateCrisis is real. And right now, our action—or inaction—will determine the very future of our planet.

It’s never been more dangerous to have a climate denier with a lifetime SCOTUS seat.https://t.co/7Iu0V5gJsT

Justice Brett Kavanaugh, whom Trump also appointed to the Supreme Court, has called climate change an "urgent and important" issue, although he has in his previous role as a judge on the U.S. Court of Appeals for the District of Columbia Circuit struck down EPA rules aimed at reducing emissions.

Blumenthal said he believes Barrett sidestepped answering the questioning because she did not want to be at odds with President Trump.

"My guess is because she has some intellect, she seems to be well informed, she would give the answer that almost all Americans give, which is that human beings cause climate change," Blumenthal told reporters after yesterday’s hearing.

But, he said, "that would have caused her to be in conflict with Donald Trump, so she was unwilling to state any opinion."

Roberts has joined his four liberal colleagues in the majority of a variety of cases, including some with implications for environmental policy.

Last term, to Trump’s public dismay, Roberts helped unwind the administration’s rollback of deportation protections for people who came to the United States illegally as children.

The chief justice penned an opinion saying that the Department of Homeland Security needed to do a better job of explaining why it was getting rid of the Deferred Action for Childhood Arrivals (DACA) program — a ruling that could affect efforts by any administration to unravel environmental rules (Greenwire, June 18).

"President Trump has repeatedly accused Chief Justice Roberts of betraying conservatives in the court’s decisions on health care, DACA protections and other rights," said Hirono. "He’s made it clear he has nominated you to do the job he thinks Chief Justice Roberts and Republicans fail to do."

The committee had scheduled a vote today on Barrett’s nomination but said the panel’s decision would be postponed by one week, in accordance with procedures that allow Democrats to request a delay. Then the full Senate would vote on whether to confirm her.

Republicans hold a majority in the Senate and can confirm Barrett absent any bipartisan support — even without the votes of two moderate Republicans who have criticized the GOP’s swift action on the high court nominee.

"You will be confirmed, God willing," Judiciary Chairman Lindsey Graham (R-S.C.) said to Barrett at the conclusion of yesterday’s hearing.

Sen. Dick Durbin (D-Ill.) told reporters that "if you just do the raw numbers, then there’s no way to stop" Barrett’s confirmation.

"But we have learned in the past that if the American people decide to stand up and speak up, it can make a difference," he said.

"[If] two more Republican senators will join us, that’ll be the end of this process for now," Durbin said. "And so we’ll continue to appeal to across America for people to not only vote, but also to engage."