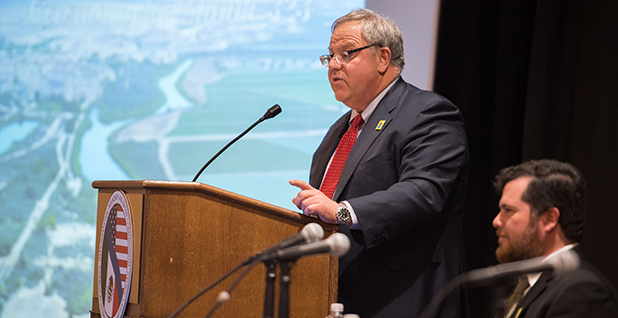 On the eve of a crucial Senate confirmation hearing, the Interior Department has turned over to a House panel thousands of pages disclosing more about acting Interior Secretary David Bernhardt’s schedules and activities.

The 7,137 documents containing 26,792 pages delivered late yesterday to the Democratic-controlled House Natural Resources Committee include detailed calendars, day-ahead schedule previews and meeting proposal forms describing who has wanted to meet with Bernhardt and why.

"The operations of the Office of the Secretary and the Deputy Secretary involve compiling and managing an ever changing schedule," Cole Rojewski, director of Interior’s Office of Congressional and Legislative Affairs, noted in a cover letter.

More than a simple bureaucratic shuffling, the delivery of pages that were part of 2,731 distinct documents marked the latest move in an ongoing struggle involving congressional oversight, executive branch transparency and the particulars of how Bernhardt operates.

The House Democrats cited meetings with lobbyists that were not previously disclosed and the use of overly general terms. Between August 2017 and September 2018, for instance, Bernhardt’s publicly released calendars identified 98 events simply as "external meeting."

Forty entries over the course of the year were identified only as "call" or "call time."

"The versions of your calendars that have been obtained through Freedom of Information Act requests and posted to the DOI website are missing important details," the Democrats stated.

Interior now posts more detailed schedules for Bernhardt online, identifying by name and organization the nongovernmental individuals with whom he has met.

"Frankly, I believe that all Federal public officials, including members of Congress, should publicly disclose all meetings held with individuals or parties other than government entities, as I am already committed to doing," Bernhardt wrote to Grijalva and Cox last month.

Interior delivered the documents more than a month later than the House members wanted but several days before Bernhardt’s confirmation hearing to replace former Interior Secretary Ryan Zinke, to be held Thursday before the Senate Energy and Natural Resources Committee (E&E Daily, March 25).

The hearing will illuminate how Bernhardt’s critics on and off of Capitol Hill contend the former lobbyist is too cozy with special interests, and private groups, too, have been seeking more documented insight into his day-to-day activities.

Last July, on behalf of the Western Values Project, Democracy Forward filed suit against Interior for failing to release documents in response to 10 FOIA requests for Bernhardt’s official communications and other work.

"DOI’s foot-dragging is particularly problematic given Acting Secretary Bernhardt’s nomination to Secretary and, in advance of his confirmation hearings, his efforts to tout his commitment to agency transparency and ethical public service," the groups’ attorneys wrote in a Feb. 22 court filing.

Justice Department attorneys countered in a March 12 filing that Interior had "identified over ten thousand pages of potentially responsive records," with several searches still ongoing, and that officials are "currently reviewing 500 pages per month."