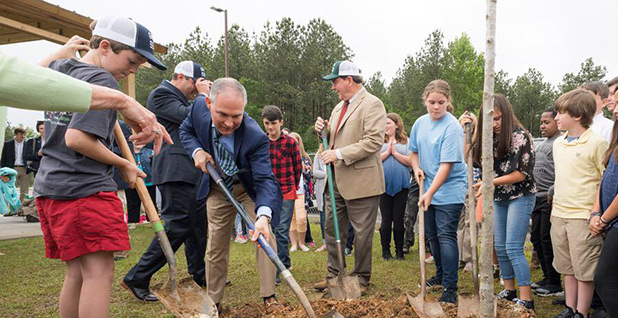 "This administration does not vet well," Senate Environment and Public Works Committee ranking member Tom Carper (D-Del.) told reporters yesterday. "Otherwise, we would not have Scott Pruitt submitted as head of the EPA."

Carper pointed to a New York Times article published over the weekend suggesting — among other things — that Pruitt may have violated Oklahoma ethics laws as a state senator and attorney general by failing to disclose his interests in a real estate shell company.

"It just lays out what kind of person he is, what kind of ethical qualities he brings, the kind of misdeeds he’s capable of doing, even long before he was nominated," Carper said.

Sen. Susan Collins of Maine — the only Republican to vote against Pruitt on the floor last year — took a similar line.

"I thought this weekend’s revelations about ethical problems that he had in Oklahoma raised questions about the vetting process once again," she said.

The outcry came amid long-brewing partisan fights about obstructionism and the Senate’s procedure for confirming presidential nominees.

Since President Trump took office, Republicans have griped that Democrats consistently vote against uncontroversial nominees and use procedural delays on routine votes to bring the Senate to a crawl. Democrats, though, point out that both tactics come straight out of the Republican playbook from the Obama years and say that Trump has largely failed to send over qualified candidates.

As Democrats sought yesterday to tie the trials of Pruitt and Jackson to a larger problem with the administration, most Republicans took a more measured approach.

"You think of the number of people who have to go through a vetting process in order to get into positions in the administration, most of what we see and hear about I think are the exceptions and not the rule," Thune told reporters.

Jackson’s confirmation hearing was delayed yesterday after vague allegations surfaced about drinking on the job and a hostile work environment during his time as White House physician under Presidents Obama and Trump. Senators from both parties have said the claims are not yet fully substantiated and cautioned against writing off his nomination entirely.

As for how the allegations could affect other future nominees, Senate Majority Leader Mitch McConnell (R-Ky.) said he would leave it "up to the administration to do the vetting."

Other Republicans either declined to weigh in specifically on the White House process or highlighted the Senate’s role in scrutinizing Trump’s picks.

But Senate Energy and Natural Resources Chairwoman Lisa Murkowski (R-Alaska) said the apparent lack of vetting at the White House for Jackson is "a concern."

"We need to get people in place working in these agencies, we absolutely do," she said. "So when the vetting process is slow we all complain about it, but we do want to make sure we’ve got good folks."

Further Republican judgment on Pruitt and the broader implications of his predicament, meanwhile, will likely have to wait until after his appearances before two committees on the House side tomorrow.

"I think, obviously, Scott Pruitt’s got some serious questions to answer," Thune said.

The partisan back-and-forth was only a primer for another nominee-related fight that will play out today in the Senate Rules and Administration Committee.

Republican leadership said yesterday it would forge ahead with a proposal from Sen. James Lankford (R-Okla.) to limit post-cloture debate time on nominees from 30 to eight hours.

The panel this afternoon will mark up the proposal, which is nearly identical to a temporary rule change negotiated in 2013 by Sen. Lamar Alexander (R-Tenn.) and now-Minority Leader Chuck Schumer (D-N.Y.).

But Democrats blasted the resolution, arguing that the controversy surrounding Pruitt and Jackson proves the Senate needs all the time it can get to vet Trump’s nominees.

"It couldn’t be put forward at a worse possible time," Schumer said of Lankford’s proposal. "This week has shown the president’s nominees deserve scrutiny, not automatic confirmation."