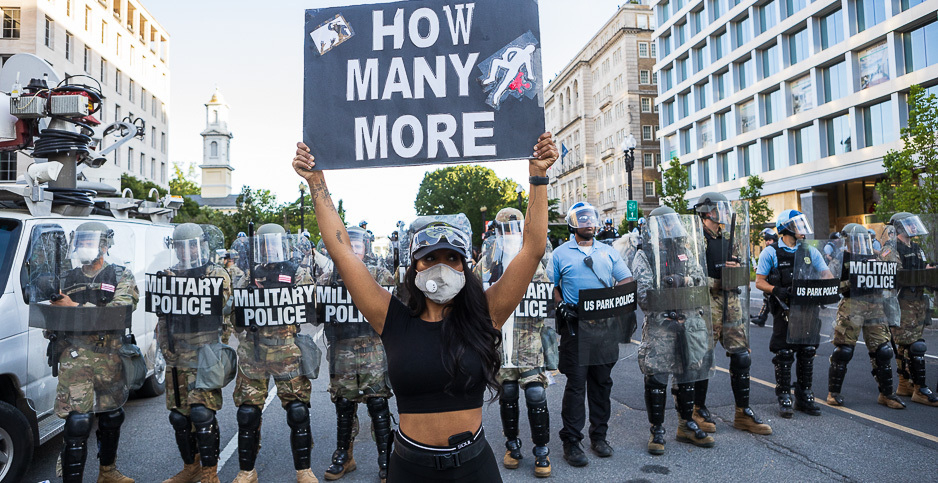 Protester Shaynna Ford of Washington holds up a sign in front of a line of officers from different jurisdictions, including the U.S. Park Police, during demonstrations last week near the White House. Francis Chung/E&E News

U.S. Park Police officers would be required to wear body cameras to monitor their behavior as part of a sweeping police reform bill backed by House Democrats.

"The events of last week virtually mandate passage of our bill requiring that federal police officers have body and dashboard cameras, just as local police throughout the United States do," said Del. Eleanor Holmes Norton (D-D.C.).

Norton and Rep. Don Beyer (D-Va.) introduced the "Federal Police Camera and Accountability Act," H.R. 3364, last year. It came in response to the killing of 25-year-old Bijan Ghaisar, who was shot by two Park Police officers after he fled a car crash in Virginia in 2017. Ghaisar was unarmed when he was pulled over by Park Police on George Washington Memorial Parkway.

His death outraged Ghaisar’s family and lawmakers who accused the Park Police of keeping details of the killing private. Norton and Beyer said the only reason the public learned of the circumstances of Ghaisar’s death was because footage was released by the Fairfax County Police Department, whose officers also responded to the call. Police in Fairfax County and the District of Columbia already must wear body cameras and have dashboard cameras in marked vehicles.

Democrats included the measure in their broader "Justice in Policing Act of 2020," released yesterday by House Speaker Nancy Pelosi of California. The legislation would ban chokeholds and make it easier for victims of brutality to sue police, among other things.

Norton and Beyer revived their bill after Park Police officers used batons, shields and pepper balls to disperse a crowd of protesters near the White House on the evening of June 1. Acting Park Police Chief Gregory Monahan suspended two of the officers after live video showed them attacking two Australian journalists who were covering the event.

Democrats said they expect to pass their legislation by the end of June, responding to the national demonstrations prompted by the Memorial Day death of 46-year-old George Floyd, an unarmed black man in Minneapolis, in police custody. A police officer faces charges of second-degree murder and manslaughter after he held his knee on Floyd’s throat for nearly nine minutes.

"Recent events have sadly shown how important body cameras are for transparency and accountability following acts of police violence," Beyer said. "Both the death of George Floyd and the violent treatment of people who peacefully protested that injustice have again underscored the need for our legislation requiring body cameras for all federal police."

Park Police officers chased away protesters shortly after 6:30 p.m. June 1, just before President Trump walked across Lafayette Square to pose for photographs, holding a Bible in front of the historic St. John’s Episcopal Church. The church basement had been lit on fire by vandals the night before (Greenwire, June 2).

Interior Secretary David Bernhardt defended the actions of Park Police officers, saying they used "standard equipment, including shields, batons and pepper balls," to disperse the protesters near the White House.

In a letter to Rep. Raúl Grijalva (D-Ariz.), the chairman of the House Natural Resources Committee, Bernhardt said more than 50 officers were injured over the course of several days as demonstrators threw Molotov cocktails, rocks, bricks, bottles and other projectiles.

Park Police did not respond to a request for comment this morning.