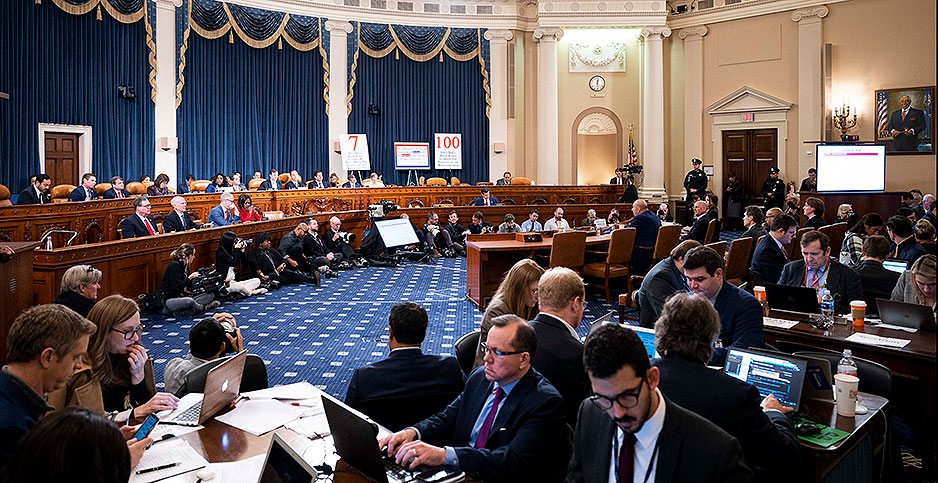 As the impeachment inquiry into President Trump gained steam this week with more explosive public hearings, the partisan blame game over infrastructure is ramping up.

Republicans argue Democrats are too distracted by the impeachment inquiry to make progress on major infrastructure legislation, a top priority for both parties.

"There is no infrastructure because we’re wasting time on impeachment," Rep. Mark Meadows (R-N.C.) told E&E News this week.

"We’ve wasted all this time on impeachment. We’re going to get to the first of the year, and there’s going to be no infrastructure bill and no conviction," said Meadows, a member of the Transportation and Infrastructure Committee and a close confidant of Trump.

"The American people are going to say, ‘Why did we waste this much time? My bridges and roads are crumbling. Why in the world did we waste so much time in the House when at least we could’ve put forth our best shot at a bipartisan agreement on an infrastructure bill?’"

Democrats dismiss this accusation as absurd, pointing to progress on a bipartisan surface transportation bill that unanimously passed the Senate Environment and Public Works Committee before the August recess.

"As the impeachment inquiry continues, Democrats in both chambers continue to do the work of the American people," he said. "Just last week, my colleagues in the House discussed a proposal for a very significant investment in infrastructure."

Schumer noted that Trump campaigned on infrastructure and floated a $2 trillion package last spring. But the president stormed out of a meeting on infrastructure with Democratic leadership in May, citing frustration with the Russia probe, and the White House has not acted on the issue since (Greenwire, May 22).

"Unfortunately, and typically, three years into the Trump administration, instead of working with Democrats, President Trump has done next to nothing," Schumer said.

"It is so typical of this administration, of President Trump. He campaigns on infrastructure, has commercials running right now saying Democrats are not doing anything on infrastructure, when he is the one who has done nothing," the senator said.

"Richard Nixon, for all his faults, signed a major infrastructure bill while he was under an impeachment inquiry and ultimately resigned," DeFazio added. "He had the good grace to resign. This guy won’t. So if he wants to do infrastructure, get on board."

Rep. Grace Napolitano (D-Calif.), another member of T&I, told E&E News on Wednesday that impeachment "should have no bearing" on infrastructure talks.

But "it probably will," said Napolitano, who came to Congress the year after President Clinton was impeached by the House.

In particular, the bill would provide $10 billion for efforts to reduce greenhouse gas emissions from the transportation sector, including the construction of more electric vehicle charging stations along federal highways.

T&I is now working to craft a companion bill in the House. DeFazio previously told E&E News he hopes to release a draft of the legislation after the holidays.

DeFazio has also said Democrats on T&I are crafting the climate provisions of the bill without input from their Republican colleagues, many of whom reject mainstream climate science (E&E Daily, Nov. 18).

Asked about this dynamic, Meadows said he’s open to examining a carbon fee and dividend proposal as part of the highway bill, assuming Democrats are open to having that conversation.

"I’m willing to look at some things as it relates to, you know, a carbon dividend," Meadows said. "If we’re going to move away from a gas tax, I’m willing to look at things that may tangentially deal with the issue more effectively than we’re doing now. But we haven’t had any meaningful discussions about that."

"Even in a non-impeachment environment, infrastructure is difficult," Gribbin told E&E News.

"Infrastructure without climate change is very complicated," he added. "That’s part of the challenge we’ve seen over the past three years. The broader you make it, the harder it is to reach consensus. And obviously climate change, in and of itself, is a contentious, complicated issue."

Complicating matters, it appears that the rancor over impeachment has fed into partisan bickering regarding pipeline legislation on T&I, further straining relationships on the panel.

Committee Republicans on Wednesday blasted their Democratic colleagues for passing a raft of pipeline bills without seeking input from across the aisle (E&E Daily, Nov 21).

"The Committee Majority had an opportunity today to do what the American people expect us to do — advance legislation that we have worked on together for the good of the Nation’s infrastructure. Unfortunately, they failed to do that," T&I Committee ranking member Sam Graves (R-Mo.) said in a statement.

"It is my hope the Majority does not follow this same partisan process for the important work the Committee must still do on reauthorizing surface transportation programs," he added.

DeFazio told reporters Wednesday his Republican counterparts objected to a number of climate change provisions in the pipeline safety reauthorization, such as efforts to restore an Obama-era methane rule.

"They will do nothing — zero, nada, nothing — that relates to climate change because they deny it," he said.

"On the surface [transportation] bill, it’s going to be a very green bill," he added.