Dems say ‘Build Back Better’ on White House back burner 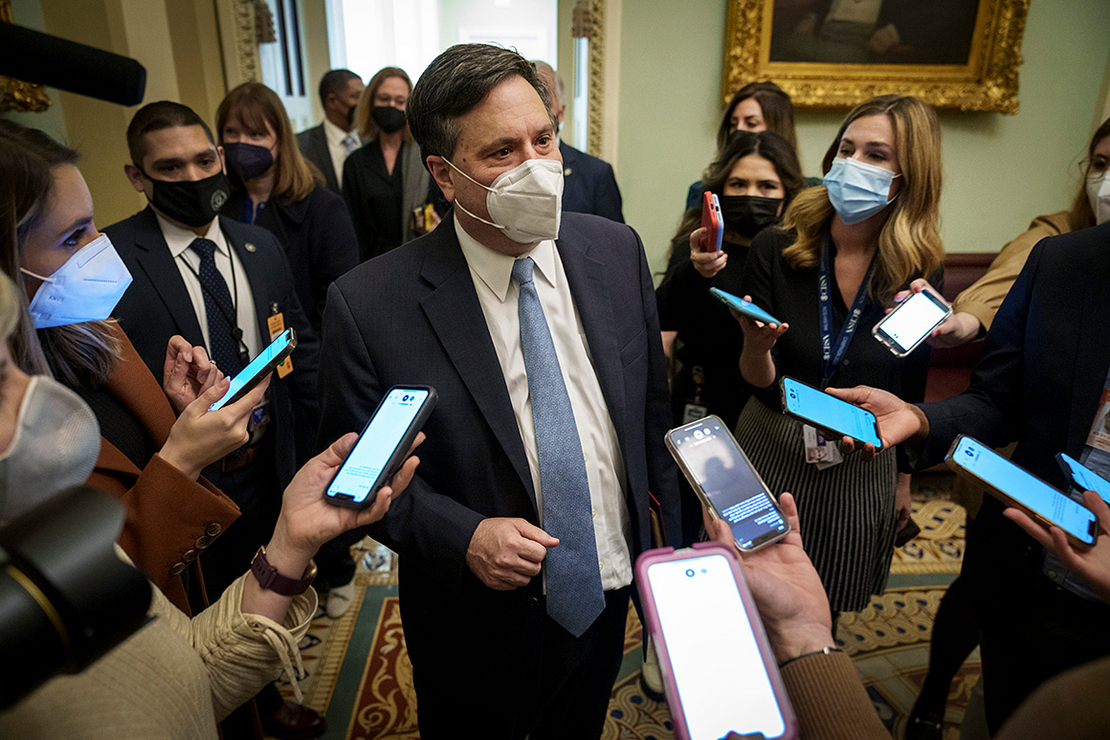 The $1.7 trillion climate and social spending package once the centerpiece of the Democrats’ domestic agenda barely registered as a blip on the radar during a meeting yesterday with Senate Democrats and White House chief of staff Ron Klain, according to lawmakers in attendance.

That the legislation is now taking a back seat to other issues President Biden is poised to discuss in his March 1 State of the Union address is another warning sign that party leaders have no plans to revive the “Build Back Better Act,” with its $550 billion investment in programs to help the environment, anytime soon.

When asked whether a path forward on the measure was addressed during the meeting, Sen. Joe Manchin (D-W.Va.) said simply, “Not that I recall.” The moderate swing vote in a 50-50 Senate derailed passage of the budget reconciliation bill late last year when he said he could not vote for it.

As for his own engagement with the White House on the spending package, Manchin added, “No formal talks at all.”

Sen. Mazie Hirono (D-Hawaii) also told reporters yesterday that she did not recall the “Build Back Better Act” being discussed at the meeting, nor did she expect Biden to speak specifically about the package during his upcoming speech.

The State of the Union is still two weeks off, but if Biden sidesteps the bill, it would serve as a stark admission that the party is running out of options, or perhaps political will, to salvage it.

Hirono did say she imagined there would be opportunities for Biden to speak about issues “within the rubric” of the reconciliation bill, as Democrats continue to say they should be pushing for enactment of policies around climate, child care and drug pricing.

The meeting with Klain was convened as an opportunity for the White House to brief senators on the president’s plans for his State of the Union speech.

“We didn’t talk about it as a vehicle for passage,” he said. “We did talk a lot about the items that are included in ‘Build Back Better.’”

‘Hope that something can be assembled’

Some Democrats characterized the meeting differently, suggesting that while Klain might not have come in with a desire to discuss the bill, he was still asked about its status.

“You can’t get a group of Democrats together on Capitol Hill” without the topic coming up, said Sen. Jeff Merkley (D-Ore.). “Several of us asked about the strategy, but I’ll leave it to [Klain] to let him talk to you all directly on that.”

While Merkley wouldn’t share what that strategy was to keep the bill alive, he confirmed his belief that the Biden administration was determined that “these issues will get addressed. Exactly how they get addressed, it may not be the same package, the same structure, the same name — we didn’t get details.”

Democrats have mentioned splitting the components of the “Build Back Better Act” into parts and passing them separately, or lumping together a few provisions from the original legislative framework where there is Democratic consensus and moving ahead with those.

“I would describe it as exhibiting continued hope that something can be assembled that all 50 of us can agree on that can get into the reconciliation wagon,” was how Sen. Sheldon Whitehouse (D-R.I.) characterized conversations on the topic.

Sen. Tom Carper (D-Del.), the chair of the Environment and Public Works Committee who has been an enthusiastic champion of resuming talks on the measure, gave a firm “no comment” when asked whether it came up at the closed-door meeting.

There are also calls for Biden to use executive actions to enact policies unilaterally, but the White House has so far been mum on whether Biden will go that route. It would be sure to spark Republican accusations of abuse of power. Moreover, executive actions lack the force of law to withstand reversal by a potential GOP successor in 2024, 2028 or beyond.

Ultimately, Senate Majority Leader Chuck Schumer (D-N.Y.) said after the meeting that the focus was largely on the pandemic and controlling inflation — an issue that has dominated Capitol Hill in recent weeks and is the reason Manchin cited for leaving “Build Back Better Act” negotiations in December.

“We mainly focused on domestic issues,” Schumer told reporters, “and particularly cost-cutting and how we turn the corner on Covid.”