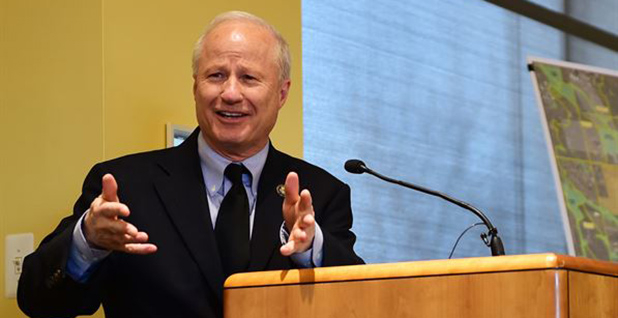 It contracted and absorbed more of Denver’s growing population, hugging the city’s metropolitan area from the east and bordering suburbs to its south and north.

The post-2010 lines boosted the Latino share of district population from 9 percent to more than 20 percent, and included all of Aurora for the first time, making the 6th one of Colorado’s most diverse districts.

It became fertile ground for Democrats. Or so they thought.

In the three elections since the change, Rep. Mike Coffman (R) has endured, fighting off a series of locally known challengers backed by national money, even as Barack Obama and Hillary Clinton carried the district in the past two presidential races.

Democrats think 2018 is the year. The seat is key to party hopes of flipping the House. And among their roster of candidates are a combat veteran and a former Department of Energy aide.

"We fully expect to take back this swing seat in 2018," said Rachel Irwin, regional spokeswoman for the Democratic Congressional Campaign Committee, which works to elect House Democrats. She called Coffman "more vulnerable than ever."

Registered Democrats barely outnumber Republicans in the district. Like Colorado as a whole, unaffiliated voters are a plurality in the 6th.

But this time around Coffman must deal with Democratic anger at President Trump’s GOP. The president’s party has generally suffered during his first midterm elections, and Trump is historically unpopular.

‘Don’t care for him much’

Whoever wins the primary, Coffman will be a tough out.

The incumbent, 62, has built a strong local brand: a plain-spoken maverick who saw combat during his more than two decades of combined military service.

Since redistricting, he has broken with party leadership to back legislation in favor of stronger civil rights protections for voters. Coffman has also supported an LGBT anti-discrimination measure.

In 2013, he famously learned Spanish in an effort to build relationships with the large and growing Latino and Hispanic community in Aurora. Ads also touted his connection to African, Chinese and Korean communities.

"Mike is a real leader on immigration reform," says one woman.

It was a different ad, though, that brought Coffman national attention last fall. "Honestly, I don’t care for him much," Coffman said of his party’s presidential nominee, Donald Trump.

"I’m a Marine — for me, country comes first," he added. "My duty is always to you. So if Donald Trump is the president, I’ll stand up to him. Plain and simple." The spot ran in English and Spanish.

The former Colorado secretary of state has followed through with standing up to Trump. For one, he voted against GOP health care legislation. And in April, he joined the bipartisan Climate Solutions Caucus.

"It’s definitely been a positive for him and speaks to his broader independence," said Jack Pandol, regional press secretary for the National Republican Congressional Committee, which works to elect House Republicans.

Coffman’s opponents and environmental groups say the move is an illusion.

"There’s a huge disconnect between what he says back in the district and what he does in D.C.," said Crow, one of the leading Democrats, who noted the incumbent’s pro-oil-and-gas voting record.

Over his congressional career, Coffman has received $765,994 from oil and gas interests, the fourth largest contributor by industry, according to the Center for Responsive Politics.

"Coffman’s participation in the Climate Solutions Caucus is just another demonstration of his willingness to abandon everything he has fought for over the course of his career for convenience," he said. "He only has one true north, and that’s political survival."

Craig Auster, director of political action committees and advocacy partnerships for the League of Conservation Voters, said Coffman’s environmental record was "a joke" and described the climate caucus membership as "greenwashing."

The group has not endorsed a Democratic candidate, but Auster noted that Crow reached out to the group.

"Jason Crow has made it clear he is deeply committed to addressing the climate crisis, advocating for public health policies that benefit communities and protecting our planet for future generations," Auster said, adding that LCV wants to hear from the other candidates.

Coffman has voted for federal funding of renewable energy research but against regulation of greenhouse gas emissions. He has an LCV lifetime score of 4 percent.

Democrats align on their criticisms of Coffman, but the primary could be divided by the same fault lines that split the national party last year.

The DCCC and other national Democratic groups have not officially entered the race, but there seems to be a party favorite: Crow, the combat veteran and attorney.

"It’s a reflection that we’re running a pragmatic, practical campaign, and we’re building a coalition to win," Crow said during an interview.

Overall, Crow raised more than $300,000 in the most recent reporting period, a substantial figure, considering it’s more than a year out from Election Day. Coffman had more than $500,000 on hand by the same deadline.

Tillemann, who moved to Aurora in 2016, has already emerged as the contest’s anti-establishment figure. He criticized Crow for links to party powers.

"You can’t beat Mike Coffman with a standard Democratic playbook," he said. "He’s creative and resourceful and has reach in communities Democrats would like to consider strongholds."

Tillemann entered the race this summer and has not reported fundraising yet. He spent two years at DOE advising Undersecretary David Sandalow and worked on vehicle technology.

Tillemann wrote the 2015 tome "The Great Race: The Global Quest for the Car of the Future." He was also lead author of "Revolution Now," a prominent report that detailed advances in four clean energy sectors.

Tillemann has tried to make an issue of Crow’s time as an attorney. Crow defended a payday lending firm accused of charging extortionary fees.

"It’s not popular to point out another candidate’s flaws in Democratic primaries," Tillemann said, "but that’s why we lose. We need to grow up and look at these races through the same lens that the voters will use in November."

Crow said his public service record speaks for itself. The former Army Ranger was deployed to Iraq and served two tours in Afghanistan.

Top Democrats are hoping to counter Coffman’s time in the Marines, which plays well in a district where Buckley Air Force Base is the largest employer.

GOP attacks on Crow have already started, including a charge that he’s not from the district. "There’s no question Tillemann has stronger district ties than Crow, and I expect him to make an issue of that," said Pandol, the NRCC spokesman. Coffman, who spent some of his childhood in Aurora, will surely do the same.

Crow shot back that he has lived blocks from the 6th District boundary line for more than a decade. "They clearly view me as a threat," he said. "I have a strong history of service to country and the community."

It’s early. The midterm elections are 14 months away, and political changes — whether national, local or from the simultaneous Colorado gubernatorial race — are sure to rile the race.

The contest, though, could help decide the House majority party, and national attention already fixes on the district perched on the Front Range of the Rockies.

A recent CNN article profiled Coffman, calling him "the most vulnerable Republican in Congress."

For their part, the Democratic candidates seem keen to stake out messaging at this early stage.

Tillemann has a different view of the primary.